A fleet of robotic spacecraft orbiting Mars got a front row seat to space history Sunday and lived to tell about it, giving scientists their first close-up look at a comet fresh from a cloud of primordial mini-worlds at the outer reaches of the solar system.

All five orbiters operating at Mars radioed Earth after Sunday’s flyby of comet C/2013 A1 — also known as Siding Spring — within 87,000 miles of the red planet, a near-miss in cosmic terms.

NASA’s Odyssey spacecraft, Mars Reconnaissance Orbiter, and the newly-arrived MAVEN probe designed to study the Martian atmosphere used the opportunity to take images and gather data on the comet and its effects on the red planet.

Carrying a telescopic high-resolution camera, MRO got the best view of Siding Spring, capturing the first resolved images of a long-period comet plunging into the inner solar system.

MRO’s HiRISE camera, managed by scientists at the University of Arizona, took a picture of Siding Spring from a distance of 138,000 kilometers, or about 86,000 miles.

It turns out the comet’s nucleus, or rocky-ice core, may be smaller than predicted.

Telescopic observers had estimated the comet’s nucleus to be about a kilometer, or 3,300 feet, in diameter. HiRISE’s imagery shows the nucleus is less than half that size.

The camera’s narrow field-of-view, designed to look down at Martian terrain, had to be perfectly aimed at the comet, requiring precise pointing of the spacecraft by engineers at MRO’s control center at Lockheed Martin in Denver.

Kelly Fast, a program scientist in NASA’s planetary science division, said MRO was equipped to look at the comet’s shape, rotation, brightness, and the composition of its coma, a fuzzy ball of dust and gas released from the nucleus by the warming rays of the sun.

Scientists say Siding Spring is making its first pass close to the sun after spending billions of years locked in the frozen frontier of the solar system — a region known as the Oort Cloud at the farthest reaches of the sun’s gravitational influence a light-year away.

“The comet was placed there after it formed, we think, in the first million or few million years of the beginnings of our solar system, so it’s a body that’s older than the Earth,” said Carey Lisse, a senior astrophysicist at the Johns Hopkins University Applied Physics Laboratory. “Imagine a body that’s about the size of a small Appalachian mountain or Downtown D.C. It’s made roughly half of rocky dust and half of volatile ices like water, carbon dioxide and carbon monoxide.”

Comet Siding Spring was a remnant left over from the early solar system, where dust and rock accreted to form the planets. Like other objects in the Oort Cloud encircling the sun, Siding Spring was ejected from the inner solar system by the slingshot-like effect of gravity when it came close to one of the budding planets.

“The comet comes back every few million years and has never ever been closer to the sun than, we think, maybe Jupiter, Saturn, Uranus or Neptune’s distance,” Lisse said. “This is its first passage into what we call the water-ice line, where it really starts to boil its water off, so it’s acting very different. It’s also its first passage ever by Mars.”

Gravity from a passing star likely nudged the comet on a course closer to the sun, beginning a descent toward the planets that could have taken more than a million years.

Robotic missions have targeted comets before, but the probes have only visited objects that frequently pass near the planets and regularly approach the sun, wearing off the primitive features still possessed by Siding Spring.

The European Space Agency’s Giotto probe flew by Halley’s comet in 1986 and captured the first image of a comet’s nucleus, and NASA’s Stardust mission collected particles from the coma of comet Wild 2 and returned them to Earth in 2006.

ESA’s Rosetta spacecraft is currently orbiting comet 67P/Churyumov-Gerasimenko for a comprehensive survey lasting more than a year. Next month, Rosetta will drop a small daughter probe to attempt the first-ever landing on a comet’s nucleus.

While such missions got a better look at comets than the repurposed Mars orbiters, comet Siding Spring’s brush by the red planet offered the best chance yet to study a long-period comet making its first sojourn toward the sun.

“If we study the comet — its composition and structure — it will tell us a lot about how we think the planets were formed,” Lisse said before Sunday’s encounter.

“We can’t get to an Oort Cloud comet with our current rockets,” Lisse said. “These orbits are very long and extended at very great velocities, so this comet is coming to us. It’s a free flyby if you will, and it’s a very fantastic event for us to study.”

Siding Spring’s encounter with Mars was closer than any known comet flyby of Earth.

“Think about a comet that started its travel probably at the dawn of man and is just coming in close now, and the reason we can actually observe it is because we have built satellites and rovers, and we’ve now got outposts at Mars,” Lisse said.

Although the comet was thousands of miles away, officials worried that particles from Siding Spring’s nebulous 300,000-mile-long tail could damage or destroy the orbiters as the comet whizzed past at a relative velocity of 126,000 mph, even though engineers deemed the risk low.

Ground controllers commanded the spacecraft to change their orbits to duck behind Mars at the time of greatest risk from ice and dust in the comet’s coma.

Odyssey’s instruments were expected to study the comet’s coma and tail and take imagery in visible and infrared wavelengths, according to Fast.

MAVEN’s suite of particle detectors and atmospheric sensors were supposed to look for signs of heating or expansion of the Martian upper atmosphere caused by the comet. The orbiter’s ultraviolet imaging spectrometer was also expected to take images of Siding Spring and map its composition.

According to an ESA blog on the Mars Express mission, the craft will downlink data from the comet flyby this week, including observations of the Martian atmosphere, ionosphere and images of Siding Spring itself.

NASA’s Curiosity and Opportunity rovers on the Martian surface were not in peril, but the robots were programmed to try to take pictures of Siding Spring.

“It’s excitingly fortunate that this comet came so close to Mars to give us a chance to study it with the instruments we’re using to study Mars,” said Mark Lemmon, an Opportunity science team member Mark Lemmon from Texas A&M University, who coordinated the camera pointing. “The views from Mars rovers, in particular, give us a human perspective, because they are about as sensitive to light as our eyes would be.” 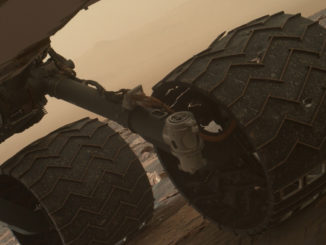 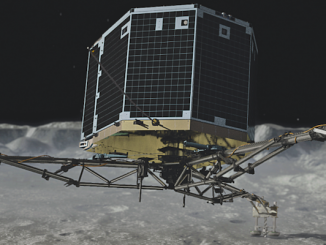