Launching through a blanket of low-hanging clouds and light mist, a SpaceX Falcon 9 rocket thundered into the sky over Florida’s Space Coast early Thursday and delivered 60 more Starlink internet satellites to orbit. The rocket’s first stage touched down on SpaceX’s floating landing platform in the Atlantic Ocean to complete its eighth trip to space and back.

The 229-foot-tall (70-meter) Falcon 9 rocket flashed to life and lifted off from pad 39A at the Kennedy Space Center at 3:24:54 a.m. EST (0824:54 GMT). Fifteen seconds later, the liquid-fueled launcher disappeared into a cloud deck over the seaside spaceport, leaving behind an orange flow that slowly faded with the roar of the Falcon 9’s powerful main engines.

Arcing toward the northeast, the Falcon 9 exceeded the speed of sound and dropped its first stage booster about two-and-a-half minutes after liftoff. A single Merlin engine on the upper stage ignited to continue the flight into space, while the first stage descended to a propulsive landing on the drone ship “Of Course I Still Love You” positioned about 400 miles (630 kilometers) downrange from Cape Canaveral.

The successful landing marked the 75th intact recovery of a Falcon rocket booster since December 2015. The booster on Thursday mission — designated B1049 — made its eighth launch and landing after debuting in September 2018, tying another first stage for the most number of flights in SpaceX’s fleet.

A Falcon 9 booster on SpaceX’s previous launch Feb. 15 failed to land on the drone ship after one of its nine main engines shut down prematurely during ascent.

After reaching a preliminary parking orbit, the upper stage coasted halfway around the world before firing its engine again for a one-second orbit adjustment burn over the Indian Ocean. The 60 Starlink satellites deployed from the Falcon 9’s upper stage at 4:29 a.m. EST (0929 GMT) while flying 172 miles (278 kilometers) above Earth just south of New Zealand.

The on-target launch came after a series of delays kept the mission grounded since late January. The delays were caused by weather and unspecified technical issues, and two other Falcon 9 missions with Starlink satellites took off from nearby pad 40 at Cape Canaveral Space Force Station while the flight from pad 39A stayed earthbound.

The change in the order of missions meant the batch launched Thursday was on the 20th Falcon 9 flight dedicated to carrying Starlink satellites, despite its designation on the military-run Eastern Range as Starlink V1.0-L17. Launches No. 18 and 19 ended up flying before No. 17.

Liftoff of the Falcon 9 rocket with 60 more satellites for SpaceX’s Starlink internet network.

The 60 Starlink satellites, each weighing about a quarter-ton, will unfurl their solar panels and switch on ion krypton thrusters to begin raising their altitude to 341 miles (550 kilometers) in the coming weeks. At that altitude, the satellites will join more than 1,000 active Starlink satellites flying in orbits inclined 53 degrees to the equator, taking them above nearly all of the world’s populated regions.

SpaceX has launched 1,205 Starlink satellites to date with the 60 fresh relay stations delivered to orbit Thursday. But 63 of the Starlinks have been intentionally deorbited or re-entered the atmosphere after failing, and another 20 are not maneuvering or appear to be in the process of deorbiting, according to a tally of Starlink satellites from Jonathan McDowell, an astronomer and respected tracker of spaceflight activity.

SpaceX is well on the way to finish deployment of its initial tranche of 1,584 Starlink stations — including spares — later this year. SpaceX won’t stop there, with plans to launch additional orbital “shells” of Starlink satellites into polar orbit to enable global coverage, with a first-generation fleet totaling some 4,400 spacecraft.

The company is already providing an interim level of service over parts of the Earth, such as Canada, northern parts of the United States, and the United Kingdom. Beta testing of the Starlink services is already underway with users in those regions. SpaceX is also accepting pre-orders from Starlink consumers, who can pay $99 to reserve their place in line to get Starlink service when it becomes available in their area. For people in the southern United States and other lower-latitude regions, that should come by late 2021, SpaceX says.

Elon Musk, SpaceX’s founder and CEO, tweeted Feb. 9 that SpaceX’s Starlink subsidiary will go public once it has a predictable cash flow.

The centerpiece of SpaceX’s Mars plans is a next-generation fully reusable rocket called the Starship, which the company says will eventually replace the company’s Falcon 9 rocket and Dragon spacecraft.

The Falcon 9 launch early Thursday occurred less than a half-day after at atmospheric test flight of a Starship prototype from SpaceX’s development facility in South Texas. The Starship test vehicle made a controlled landing, a first for a Starship descending from high altitude, and a major step forward for the rocket program.

But the prototype exploded a few minutes later, scattering debris across the landing site on Texas Gulf Coast. Nevertheless, SpaceX declared the test a success.

The 60 quarter-ton satellites deployed from a Falcon 9 rocket while flying 172 miles (278 kilometers) above Earth south of New Zealand.

This brings the total number of Starlinks launched to 1,205.https://t.co/UCwNCJyyHk pic.twitter.com/HmxMe27N5b

SpaceX’s jam-packed launch schedule continues with the next Falcon 9 mission set to blast off Sunday night from pad 40 at Cape Canaveral Space Force Station with 60 more Starlink satellites. That flight is scheduled for 10:41 p.m. EST Sunday (0341 GMT Monday), followed by more Falcon 9 launches with Starlink satellites in the coming weeks. 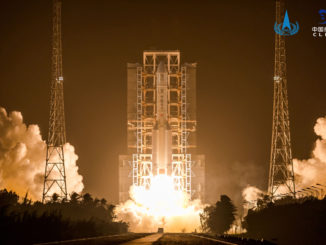 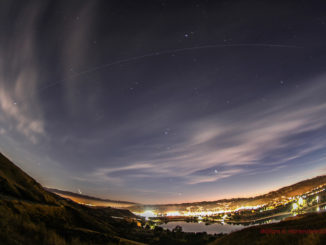