The Biden administration supports continuing NASA’s Artemis program to return astronauts back to the moon, the White House said last week, without stating whether it will back away from the program’s already-in-doubt schedule for a lunar landing by the end of 2024.

The space agency has delayed the selection of a lunar lander contractor after Congress declined to fully fund President Trump’s final budget request for the effort.

NASA’s inspector general said Wednesday that it estimates the Artemis program — as laid out by the Trump administration — will cost nearly $86 billion from fiscal year 2012 through fiscal year 2025. The inspector general’s office said about $35 billion of that cost has already been spent over the last eight years, but the bulk of the funding required for the program — more than $50 billion — will need to be budgeted over the next five years.

For comparison, NASA spent around $288 billion on the Apollo moon program and related efforts between 1960 and 1973, according to an inflation-adjusted estimate by The Planetary Society.

Money to help companies develop new human-rated lunar landing craft will take the largest share of the funding over the next five years, according to the inspector general’s office. NASA requested $3.3 billion to fund the lunar lander effort in fiscal year 2021, but Congress appropriated $850 million in a spending bill passed late last year and signed into law by President Trump.

Former Vice President Mike Pence directed NASA to try to land the first woman and the next man on the moon by the end of 2024. That schedule drew skepticism from the start, but the lunar lander budget in this year’s budget may have been the final nail in the coffin for the 2024 goal.

Nevertheless, the Biden White House supports the program to return astronauts to the moon, according to Jen Psaki, the White House press secretary.

“Through the Artemis program, the United States government will work with industry and international partners to send astronauts to the surface of the moon, another man and a woman to the moon, which is very exciting,” Psaki said Feb. 4.

The Artemis program will “conduct new and exciting science, prepare for future missions to Mars, and demonstrate America’s values,” Psaki said. “To date, only 12 humans have walked on the moon. That was half a century ago. The Artemis program, a waypoint to Mars, provides exactly the opportunity to add numbers to that. Lunar exploration has broad and bicameral support in Congress, most recently detailed in the FY2021 omnibus spending bill, and certainly we support this effort and endeavor.”

Jim Bridenstine, who led NASA during the Trump administration, told Spaceflight Now last month that he was pleased with the bipartisan support for the broader Artemis program goals. The difference in opinion on Capitol Hill hinges on how fast to go.

“The one thing that we need is a Human Landing System,” Bridenstine said in an interview last month. “We put together a big budget necessary to achieve that Human Landing System. We asked for $3.3 billion, and Congress funded it to the tune of $850 million in a very bipartisan bill.”

Without the full budget for the lunar lander, “NASA is going to have to do an assessment and make a determination as to whether or not 2024 is going to be achievable or not,” Bridenstine said.

The $850 million for the Artemis program’s Human Landing System is part of NASA’s overall $23.3 billion budget for fiscal year 2021.

NASA’s inspector general said the agency had spent around $400 million on the Human Landing System as of June 2020. The effort needs another $21.3 billion over the next five years, assuming NASA maintained the aggressive schedule for a 2024 moon landing.

One of the teams is led by Blue Origin, which is designing a crewed moon lander in partnership with Lockheed Martin, Northrop Grumman, and Draper. Dynetics heads another consortium with Sierra Nevada Corp. and other companies, and SpaceX won a study contract for NASA to evaluate using a version of the company’s next-generation Starship vehicle for lunar landing sorties.

NASA intended to select at least two of the teams to continue their work on the Human Landing System. That selection was due by the end of February, but NASA decided last month to extend “base period” contracts with all three teams from the end of February through the end of April, giving the agency more time to evaluate each concept and recalibrate its HLS acquisition strategy in light of the fiscal year 2021 budget.

“Right now, it really is trying to figure out how to how we’re going to move forward, given the budget constraints,” Bridenstine said last month, days before he left NASA.

President Biden has not nominated a new NASA administrator. Steve Jurczyk, NASA’s most senior civil servant, is the acting administrator until the White House nominates and the Senate confirms a permanent replacement for Bridenstine.

While the Human Landing System has the longest road to being ready for human flights to the moon, major technical hurdles remain for other elements of the Artemis program.

NASA’s inspector general said the agency had spent $16.4 billion on the Space Launch System heavy-lift rocket as of June 2020, but the SLS has yet to fly. The core stage for the first SLS test flight is set for another test-firing on a stand at NASA’s Stennis Space Center in Mississippi later this month, following an early shutdown during a hot fire test in January.

Once the test is completed, NASA will ship the core stage to the Kennedy Space Center in Florida for integration with two side-mounted solid rocket boosters, which are currently being stacked inside Kennedy’s iconic Vehicle Assembly Building. An upper stage and NASA’s Orion spacecraft will be installed on top for an unpiloted test flight around the moon, a mission designated Artemis 1.

NASA has not ruled out launching Artemis 1 before the end of the year, but a launch in 2022 is more likely after delays in the SLS core stage test program at Stennis.

A second SLS/Orion test flight in 2023 will carry three NASA astronauts and a Canadian crew member around the moon and back to Earth. That mission, Artemis 2, will be the first time humans travel beyond low Earth orbit since the final Apollo moon mission in 1972.

Under the Trump-era Artemis schedule, the third SLS/Orion flight in 2024 would carry astronauts to rendezvous with a lunar lander stationed near the moon. The lander would launch on a commercial rocket.

The crew would float into the lander for descent to the moon’s south pole, then launch back into space again to meet up with the Orion capsule for the return trip to Earth.

NASA is also planning to launch a mini-space station to orbit the moon. The lunar outpost, or Gateway, will serve as a way station for astronauts traveling between Earth and the lunar surface, providing a location for refueling of reusable lunar landers, a safe haven for Artemis crews, and a research platform in deep space.

But the Gateway has encountered delays of its own, and NASA officials last year said they would consider bypassing the Gateway for the first Artemis lunar landing mission. 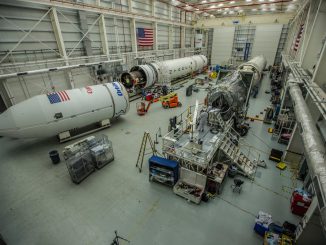 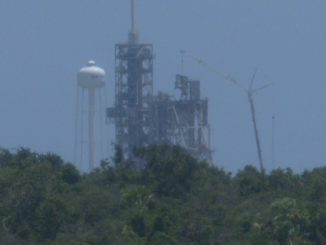 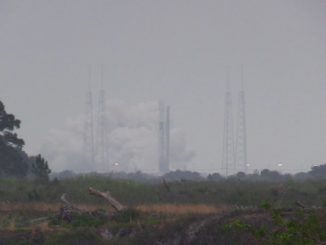