In a mission marking the end of an era, NASA astronaut and former virus hunter Kate Rubins, using NASA’s last currently contracted seat on a Russian Soyuz spacecraft, rocketed into orbit Wednesday with two cosmonaut crewmates on a record-setting flight to the International Space Station.

Celebrating her 42nd birthday, Rubins’ launch came just two weeks before 20th anniversary of the arrival of the station’s first crew on Nov. 2, 2000. Since then, the lab complex has been continuously staffed by rotating crews, or expeditions, of American, Russian, Japanese, European and Canadian fliers along with a handful of space tourists.

“It’s just incredible that we’ve had a space station with continuous human presence for 20 years,” Rubins said. “It’s one of the most incredible engineering achievements, I think, that humanity has done. And the fact that we’ve done it as an international partnership and a collaboration, I think that’s absolutely the intangible benefit of all of this.”

And on a more personal note, “this is gonna be kind of a birthday that I’ll never be able to beat,” she said before launch. “It’s pretty funny. It’s incredible to launch to space on your birthday.”

In a first for the Soyuz program, the crew carried out a speedy two-orbit rendezvous, docking at the station’s Earth-facing Rassvet module at 4:48 a.m., just three hours and three minutes after launch — a new record for the fastest trip to the space station.

Hatches between the two spacecraft were opened at 7:07 a.m. Standing by to welcome Ryzhikov and company aboard were Expedition 63 commander Chris Cassidy and cosmonauts Anatoly Ivanishin and Ivan Vagner. They were launched to the space station aboard the Soyuz MS-16/62S spacecraft on April 9.

“Happy birthday, Kate. You had a big candle,” said Cassidy as Rubins floated into the station. Congratulated again by Russian flight controllers a few minutes later, she said “it’s the best birthday I’ve ever had.”

Since the space shuttle’s last flight in 2011, NASA has relied solely on Russia’s reliable three-seat Soyuz and the Russian space agency’s willingness to sell seats, albeit at premium prices, to the U.S. space agency and its international partners.

NASA paid Roscosmos $90.3 million for Rubins’ ticket to ride, but it’s the last such payment the agency hopes to make as it transitions to regularly scheduled launches using SpaceX’s Crew Dragon capsule and, starting next year, Boeing’s CST-100 Starliner.

The next planned launch of U.S. astronauts to the space station after Rubins will be aboard a SpaceX Crew Dragon making the program’s first operational flight. Launch of the six-month-long “Crew-1” mission is targeted for early to mid November.

NASA still plans to launch astronauts aboard Soyuz spacecraft through the life of the station program as a hedge against emergencies like a serious illness, for example, that could result in the early departure of a U.S. or Russian crew ship.

Mixed crews would ensure at least one astronaut or cosmonaut on board the station at all times to operate their nation’s systems.

But those mixed flights, including the eventual launch of Russian cosmonauts aboard the new American spacecraft, will be covered by barter arrangements, not direct cash payments. NASA will still be paying for seats aboard U.S. spacecraft — the cost is not yet known — but that money will be spent in the United States.

To put that in perspective, NASA has purchased 71 Soyuz seats for roughly $4 billion since 2006, a total that includes 5 seats purchased through Boeing for $373.5 million as part of a settlement between the company and a Russian counterpart. The total also includes $1 billion for 13 seats that were required because of delays getting the Commercial Crew Program off the ground.

Overall, NASA paid an average cost per seat of $56.3 million for the 71 completed and planned missions from 2006 through Kate Rubins’ Soyuz MS-17 flight with prices ranging from a low of approximately $21.3 million to the $90.3 million paid for Wednesday’s flight.

Appreciative of Russia’s long-term support, NASA is eager to turn the page.

The successful test flight of a Crew Dragon carrying two astronauts to the space station earlier this summer marked “another milestone, a critical milestone in the development of our ability to launch American astronauts on American rockets from American soil, now sustainably,” said NASA Administrator Jim Bridenstine. “These are very exciting times.”

The Crew-1 astronauts will boost the station’s staffing level from three to seven, and the U.S. segment’s crew from one to five.

“When we increase the number of astronauts onboard, we’re going to be able to get three times as much science done and three times as much technology development,” Bridenstine said. “And all of that is critically important for for our Artemis (moon) program, and eventually our Mars program.

“As we develop moon to Mars, we’re going to be using low-Earth orbit to test all of these capabilities and technologies, ultimately, to create a sustainable return to the moon, and then take all of that knowledge onto Mars. So this particular mission is another critical milestone. We’re very excited about it.”

Ryzhikov, Kud-Sverchkov and Rubins plan to spend six months aboard the space station, greeting two SpaceX Crew Dragon crews before heading back to Earth around May 1.

Kud-Sverchkov is the only rookie on the Soyuz crew. Ryzhikov spent 173 days aboard the station in 2016-17 and Rubins, who holds a Ph.D. in cancer biology from Stanford University, spent 115 days aboard the lab in 2016 during a mission that overlapped Ryzhikov’s stay.

She completed two spacewalks, including one to finish installing a docking port that will be used by visiting SpaceX and Boeing spacecraft, logging 12 hours and 46 minutes outside the station.

While she will not be investigating COVID-19 during her second station expedition, Rubins will bring her expertise to bear with a wide variety of research and experiments.

“We’re not researching coronavirus specifically on station, that needs to be handled in high biosafety level labs on Earth,” she said. “But we are looking at things like microbes in our environment, how we interact with those microbes, whether they’re pathogenic or beneficial.

“And space station is an incredible place to study that because it’s isolated. ISS is sort of the ultimate quarantine. We’re very interested in what happens with humans and their microbiome environment when we are living off of the planet. And we have been for almost 20 years now. I think that’s going to be an incredibly exciting area of research.”

Rubins, Ryzhikov and Kud-Sverchkov will have one week to get up to speed on station operations before Cassidy, Ivanishin and Vagner undock and return to Earth aboard their Soyuz MS-62/16S spacecraft to close out a 196-day mission. Landing on the steppe of Kazakhstan near the town of Dzhezkazgan is planned for Oct. 21 (U.S. time).

Cassidy, a former Navy SEAL, will have logged 378 days in space during three missions while Ivanishin’s total will stand at 196 days over three flights. Vagner is completing his first flight.

Landing will set the stage for launch of the Crew-1 mission from historic pad 39A at the Kennedy Space Center in early November. On board will be mission commander Michael Hopkins, Victor Glover, Shannon Walker and Japanese astronaut Soichi Noguchi.

Hopkins, Walker and Noguchi, who flew on the space shuttle as well as a Soyuz, are spaceflight veterans while Glover is making his first flight to space. Like Rubins, they plan to spend about six months aboard the station, handing off to an other SpaceX Crew Dragon crew next April.

“I’m really excited to be able to greet Crew-1 when they come across the hatch,” Rubins said. “They’re going to be getting there pretty quickly after I arrive, and it’s going to be incredible to have our station complement grow to a total crew of seven.

“There’s a certain amount of time every week we have to devote to just maintaining the space station, keeping the equipment running, keeping our life support going,” she said. “When we have additional crew members on board, we can get that much more science done.” 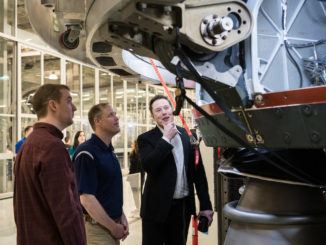 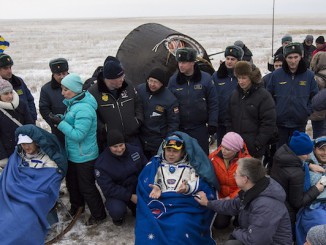 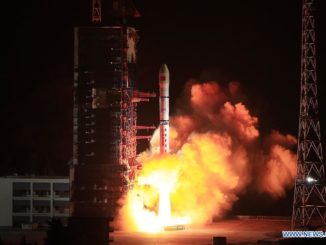