A next-generation Chinese capsule designed to carry astronauts to the country’s planned space station, and eventually the moon, wrapped up a nearly three-day unpiloted orbital test flight Friday with a landing in northwestern China.

The capsule descended under three main parachutes and inflated airbags to cushion its landing in a remote part of northwestern China, punctuating a high-speed re-entry designed to simulate conditions the spacecraft would encounter during a return from the moon.

The test vehicle lifted off Tuesday on top of a Chinese heavy-lift Long March 5B rocket, a new variant of China’s most powerful launch vehicle tailored to carry massive modules into orbit for the country’s planned space station. A secondary payload on the launch was designed to test an inflatable heat shield, but it malfunctioned during return to Earth on Wednesday,.

After separating from the Long March 5B rocket, the crew capsule raised its altitude in a series of seven maneuvers this week, ultimately reaching an elliptical orbit ranging as far as 5,000 miles (8,000 kilometers) from Earth, according to Chinese space officials.

In a statement, China’s top space contractor said the spacecraft spent more than 2 days and 19 hours in orbit. The capsule completed a deorbit burn using its braking rockets at 0422 GMT (12:22 a.m. EDT) Friday, then jettisoned its service module at 0533 GMT (1:33 a.m. EDT) to burn up during re-entry.

The crew module plunged back into the atmosphere at more than 20,000 mph (9 kilometers per second), according to a statement from CASC, then unfurled two drogue parachutes and three main chutes. Before landing, the capsule inflated six airbags to soften the impact of touchdown.

The primary objective of the crew capsule’s demonstration flight was to gather data on the heat shield’s performance and the spacecraft’s aerodynamic shape during re-entry.

The new crew carrier is designed to eventually replace China’s Shenzhou spacecraft to ferry astronauts to a space station in Earth orbit.

The new Chinese crew vehicle also has an unfolding shield that opens in flight to expose the capsule’s rendezvous sensors and docking mechanism. The cover folds up again for re-entry, protecting the sensitive equipment during landing.

China’s next-generation crew carrier is reusable for up to 10 flights, with a detachable heat shield built to handle higher-temperature returns through Earth’s atmosphere, such as those a capsule would encounter on a re-entry from a lunar mission.

Like the new capsule design, the Shenzhou landing module returns under parachutes. But the Shenzhou uses retrorocket thrusters — instead of airbags — to soften the blow of landing. That makes for a rougher ride for passengers.

With its propulsion and power module, the crew spacecraft measured nearly 29 feet (8.8 meters) long, and is almost 15 feet (4.5 meters) in diameter at its widest point. It weighed around 47,600 pounds (21.6 metric tons) fully loaded with equipment and propellant, according to the China Manned Space Agency, or CMSA.

Chinese officials said the new capsule is able to operate with autonomy, including a capability to self-diagnose technical problems. 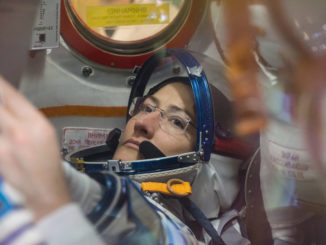 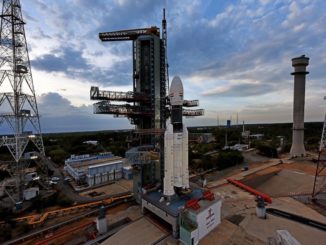 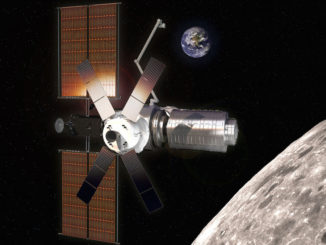