NASA Administrator Jim Bridenstine says he is “fairly confident” that astronauts can fly to the International Space Station aboard SpaceX’s Crew Dragon spaceship at the end of May or early June, pending final parachute tests, data reviews and a training schedule that can escape major impacts from the coronavirus pandemic.

An investigation into an engine failure on the most recent launch of SpaceX’s Falcon 9 rocket — the same design that will launch the Crew Dragon astronauts — is also expected to be completed in short order, Bridenstine said.

“I think we’re really good shape,” Bridenstine said in an interview Thursday. “I’m fairly confident that we can launch at the end of May. If we do slip, it’ll probably be into June. It won’t be much.”

NASA astronauts Doug Hurley and Bob Behnken are training for the Crew Dragon test flight, which will be the first mission to launch astronauts into Earth orbit from U.S. soil since the retirement of the space shuttle in July 2011. The astronauts will take off from pad 39A at NASA’s Kennedy Space Center and dock with the space station a day or two later.

Hurley and Behnken are expected to live and work aboard the space station for two or three months, then return to Earth for a splashdown in the Atlantic Ocean east of Cape Canaveral.

SpaceX and Boeing won multibillion-dollar NASA commercial crew contracts to develop human-rated spaceships in 2014, following several years of preliminary development and testing. SpaceX is ahead of Boeing, and the crew capsule for the upcoming test flight — designated Demo-2 — is currently at Cape Canaveral undergoing pre-launch processing and testing.

SpaceX’s Crew Dragon and Boeing’s Starliner capsule will give NASA a U.S.-built ship to ferry crews to and from the station, ending the space agency’s reliance on Russian Soyuz spacecraft for crew transportation.

Hurley and Behnken continue preparing for the Demo-2 mission despite the coronavirus pandemic, which is affecting other government and industry sectors. Personnel working on some NASA missions are working remotely, but Bridenstine said the agency’s Commercial Crew Program and the Mars Perseverance rover remain top priorities, and physical preparations continue for launches in the coming months.

While the Crew Dragon’s first piloted test flight is set for launch from the Kennedy Space Center around the end of May, the Perseverance rover is scheduled for liftoff on a United Launch Alliance Atlas 5 rocket during a planetary launch period that opens July 17.

As of late last week, no personnel working on NASA’s Commercial Crew Program had tested positive for the coronavirus, Bridenstine said.

“Number one, the people that are working on commercial crew right now are practicing social distancing and (wearing) personal protective equipment,” Bridenstine said. “We’ve moved and changed shifts so that fewer people are in the room when you have to have multiple people in the same room. So we’ve done a lot of those things to make sure that you’re as safe as possible working on these missions.

NASA has drawn up contingency plans if a commercial crew worker tests positive. In that event, the agency plans to use contact tracing to determine who was in close proximity to the infected employee.

“If there’s an outbreak, yeah, it will affect the date. But we’re doing everything we can to minimize that eventuality,” Bridenstine said.

Other work remaining before the Crew Dragon Demo-2 launch involves final testing of the capsule’s parachutes and technical reviews of the readiness of the ship’s launch abort system, Bridenstine said.

During SpaceX’s most recent parachute test last month, the test rig was dropped from a helicopter prematurely after the craft became unstable over a test site in Nevada. NASA officials said the parachutes were not to blame for the botched test, and the helicopter pilot decided to release the test rig for safety reasons.

“It got unstable,” Bridenstine said. “The pilot dropped the test article, which was basically just a weight simulator. Nothing from that was recoverable, including the parachutes that were on-board. So we’ve got two more parachute tests, and now they’re going to be done out of the C-130 (cargo plane) instead of from a helicopter. We’ve got agreement from the chief engineer and the program manager, and the astronaut office, that those two parachute tests that we have remaining are good to go out of the C-130.”

The first of the two remaining parachute tests was expected to occur as soon as Easter weekend. During that drop test, SpaceX intended to rig the craft to only deploy one of its two drogue parachutes, then unfurl just three of the Dragon’s four main chutes. The test would allow engineers to assess the performance of the parachute system in the event of a double failure.

NASA is also evaluating data from testing on the Crew Dragon’s modified launch abort propulsion system, which would be activated to push a crew capsule away from a failing rocket, either on the launch pad or in flight.

A faulty valve inside the high-pressure propulsion system caused nitrogen tetroxide oxidizer to leak into the abort system’s helium pressurization plumbing before a ground test-firing of the abort engines last April. When SpaceX tried to test-fire the SuperDraco abort engines on a test stand at Cape Canaveral, the nitrogen tetroxide was pushed back into the titanium valve, causing an explosion that destroyed the spacecraft.

“We’re replacing all of that titanium with with another metal that isn’t going to be as combustible,” he said. “That’s taken a little bit of time, but we’re moving along very rapidly on that at this point, and we’ve done all the testing out at White Sands (in New Mexico) on that. I feel very confident that that’s that’s going to be OK.”

The design changes in the abort system were successfully tested during a high-altitude launch abort demonstration in January, when SpaceX activated the SuperDraco engines on a Crew Dragon capsule more than a minute after launch on a Falcon 9 rocket.

NASA is also reviewing the failure of a Merlin engine on SpaceX’s most recent Falcon 9 launch last month. One of the Falcon 9 first stage’s nine Merlin engines shut down prematurely, but the rocket was able to overcome the engine problem and deliver the mission’s 60 Starlink satellite payloads into their planned orbit.

“We’ve been doing some root cause on what caused that engine to fail … and what I’ve been told is that they’ve got a really good understanding of what that failure was, and it’s not going to impact our commercial crew launch,” Bridenstine said.

The reusable Falcon 9 booster on the most recent launch was flying for the fifth time. SpaceX is launching the Demo-2 mission on a brand new Falcon 9 rocket.

Assuming the Demo-2 launch remains on track for late May, NASA and SpaceX will convene a series of data reviews in the coming weeks, culminating in a flight readiness review next month.

Once the Crew Dragon is connected with its Falcon 9 launcher, SpaceX will roll the rocket to pad 39A for a test-firing of its Merlin main engines. Ground teams and the Demo-2 astronauts will also complete final rehearsals and training before the launch.

Hurley, the Crew Dragon’s vehicle commander, will strap in to the left seat inside the spaceship. Behnken, the mission’s pilot, will sit in the right seat during launch.

The two-man crew will ride the Crew Dragon capsule on a trajectory northeast from Cape Canaveral over the Atlantic Ocean. After entering orbit around 10 minutes later, the Crew Dragon will perform a series of pre-planned demonstration maneuvers under the guidance of the astronauts and ground controllers at SpaceX’s headquarters in Hawthorne, California.

The Crew Dragon will approach the space station for an automated docking within a day or two of launch, and Hurley and Behnken will open hatches to enter the station to join commander Chris Cassidy and Russian cosmonauts Anatoly Ivanishin and Ivan Vagner.

The arrival of the Crew Dragon will raise the station’s crew size from three to five for several months.

“Bob Behnken and Doug Hurley will go up as not just demonstration pilots for Demo-2, but they would actually become crew on-board the International Space Station for a period of months to do work, and they would continue to operate on the ISS,” Bridenstine said. “And then when we’re ready with the next Crew Dragon, they’ll come home.

The Demo-2 mission was originally scheduled to last a couple of weeks, but NASA is extending the flight’s duration to give the space station additional crew members.

The station is typically staffed with a six-person crew, and that will increase to seven people once SpaceX and Boeing spaceships are regularly flying to the orbiting research lab.

But the commercial crew capsules are running years behind schedule, and NASA’s current contract with Roscosmos — the Russian space agency — to purchase Soyuz seats for U.S. astronauts expires this year. That will leave the station with a crew of three until the Crew Dragon arrives.

Cassidy, who launched April 9, is the final NASA astronaut with a confirmed ride to and from the station on a Russian Soyuz spacecraft. He is scheduled to return to Earth in October.

NASA is negotiating with Roscosmos at least one additional Soyuz seat on the next Russian crew launch in October. Bridenstine said Thursday those negotiations are continuing.

Bridenstine said the second piloted Crew Dragon mission — and the first operational crew rotation flight to use the SpaceX capsule — could launch in August or September, assuming the Demo-2 mission takes off in late May or early June.

Meanwhile, NASA’s other commercial crew contractor may not launch astronauts until 2021.

Boeing said earlier this month that its Starliner crew capsule will launch on a second unpiloted test flight later this year. The Starliner’s first space mission, called the Orbital Flight Test, encountered major problems after launch, preventing the ship from docking from the space station as planned.

The Crew Dragon completed a successful unpiloted flight to and from the space station in March 2019. 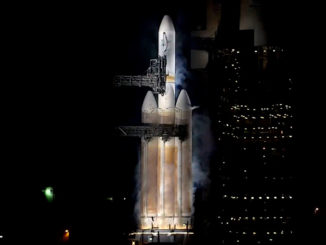 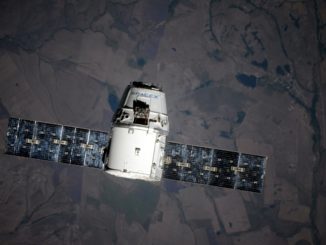 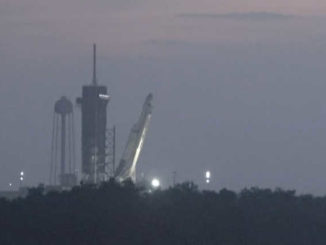