OneWeb is gearing up for launch of 34 more satellites for its broadband Internet network Saturday from the Baikonur Cosmodrome in Kazakhstan, despite reports that the company might seek bankruptcy protection and stringent restrictions on travel stemming from the coronavirus pandemic.

The London-based satellite operator is one of two companies currently launching large constellations of satellites into low Earth orbit to beam Internet signals to consumers around the world. SpaceX, the other company, has deployed 360 satellites for its Starlink network since last May, well on the way to the fleet’s initial operating number of more than 1,500 spacecraft.

With Saturday’s launch, OneWeb will have deployed 74 satellites of a planned constellation of nearly 650 satellites. OneWeb does not need as many satellites as SpaceX’s Starlink network because the OneWeb spacecraft fly at higher altitudes.

But Bloomberg reported Thursday that OneWeb was considering a bankruptcy filing as it faces a cash crunch.

Citing sources familiar with the negotiations, Bloomberg reported OneWeb is grappling with “high costs and stiff competition” in the satellite broadband market. Bloomberg said OneWeb was considering filing for bankruptcy even as the company considers other possible out-of-court alternatives.

A OneWeb spokesperson did not respond to a request for comment on the matter Friday.

OneWeb’s largest investor is the Japanese company SoftBank, a conglomerate now suffering financially after bad investments. And the trouble has been exacerbated by stock market plunges during the coronavirus pandemic.

As of last year, OneWeb had raised $3.4 billion from SoftBank, Airbus, Qualcomm and other investors.

Founded by Greg Wyler, a satellite and telecom entrepreneur, OneWeb faces intense competition from deep-pocketed entrepreneurs like Elon Musk and Jeff Bezos. Musk’s SpaceX is working on the Starlink network, and Amazon has plans for its own satellite constellation named Kuiper to provide broadband connectivity from space.

The launch of the next 34 OneWeb satellites is slated to go ahead Saturday at 1706 GMT (1:06 p.m. EDT) aboard a Soyuz-2.1b booster from the Baikonur Cosmodrome in Kazakhstan.

The Soyuz rocket rolled out to its launch pad at Baikonur on Wednesday. Launch campaigns at the Russian-operated spaceport are continuing despite travel restrictions in Kazakhstan, where authorities have closed its borders to all travelers except Kazakh citizens, diplomats and people invited by the Kazakh government.

Saturday’s mission is the third launch for OneWeb, following successful deployments of six and 34 satellites on two previous Soyuz flights in February 2019 from the Guiana Space Center in South America and on Feb. 6 of this year from Baikonur.

OneWeb inked a launch contract in 2015 for 21 launches with Arianespace, the French launch services provider which oversees commercial Soyuz missions. Arianespace’s subsidiary, Starsem, arranges preparations for the Soyuz missions launching from Baikonur and Vostochny, while Arianespace itself manages Soyuz launches from French Guiana.

Adrian Steckel, OneWeb’s CEO, said last month the company needs around 16 more launches to fill out OneWeb’s network of 588 operational satellites. The company may eventually add at least 60 more spares to get to 648 total spacecraft in the first-generation OneWeb fleet.

Assuming its financially viable and with market demand, OneWeb has a constellation of nearly 2,000 satellites on the drawing board.

Fifteen of the additional OneWeb launches were to use Soyuz rockets later this year and next year from Baikonur, Vostochny and French Guiana. And OneWeb has agreed to launch at least 30 satellites on the inaugural flight of the next-generation European Ariane 6 rocket from French Guiana at the end of 2020.

Launches from French Guiana are currently suspended due to the coronavirus pandemic, and the work stoppage at the Guiana Space Center could delay the Ariane 6’s first launch date.

OneWeb officials said last month they planned 10 launches this year, including the successful mission completed Feb. 6. That scheduled comprised around half of Arianespace’s 2020 launch manifest, and a sizable percentage of all Soyuz launches planned this year.

Those launches may be in doubt due to OneWeb’s cash problem.

OneWeb’s satellites are manufactured at a factory near the Kennedy Space Center in Florida. A company named OneWeb Satellites, a joint venture between OneWeb and Airbus, builds the satellites in an assembly line fashion.

The factory is designed to produce two satellites per day on dual assembly lines. The mass-produced satellites each weigh about 325 pounds (147.5 kilograms), featuring xenon-fed ion thrusters, Ku-band and Ka-band antennas to link with customers and ground stations, and deployable solar array wings.

The 34 satellites awaiting liftoff Saturday are fastened to a dispenser inside the Soyuz payload fairing. The deployer was built by RUAG Space in Sweden.

After launch, the kerosene-fueled Soyuz rocket will head north from the Site 31 launch complex at Baikonur. The launcher’s four first stage boosters will jettison around two minutes after liftoff, followed by shutdown and separation of the core, or second, stage nearly five minutes into the flight.

Another Fregat engine burn more than an hour after liftoff will place the OneWeb satellites into a circular orbit 280 miles (450 kilometers) above Earth, with an inclination of 87.4 degrees to the equator.

The two satellites at the top of the cluster will release first around 71 minutes after liftoff. The remaining 32 spacecraft will separate in groups of four at intervals of approximately 20 minutes, with maneuvers by the Fregat’s smaller attitude control thrusters in between to ensure the satellites do not collide.

The satellite separation events will largely occur when the Fregat flies outside the range of ground tracking stations.

The last group of OneWeb satellites is scheduled to fly off the Fregat’s dispenser around 3 hours, 45 minutes into the mission.

Arianespace is not planning to provide a live broadcast of Saturday’s mission, but Roscosmos — Russia’s space agency — says it will provide a Russian-language video stream oaf the launch. 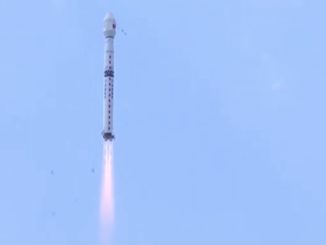 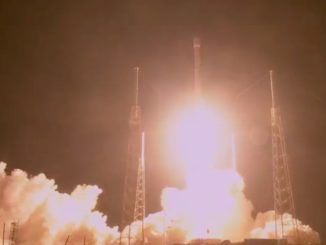 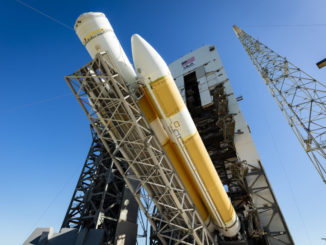