SpaceX fired up nine Merlin main engines at the bottom of a previously-flown Falcon 9 booster Saturday at NASA’s Kennedy Space Center, running the rocket through a practice countdown before a scheduled liftoff Jan. 18 with a Crew Dragon capsule to test the human-rated ship’s high-altitude abort capability.

The test-firing lasted for several seconds as the Merlin engines powered up to full throttle to produce 1.7 million pounds of thrust. The engines shut down and SpaceX began preparations to drain the Falcon 9 rocket of its super-chilled kerosene and liquid oxygen propellants.

SpaceX will lower the Falcon 9 at pad 39A and return it to a hangar at the southern perimeter of the seaside launch complex for attachment of a Crew Dragon spacecraft next week.

The Falcon 9 and Crew Dragon will roll back out to pad 39A, where teams will run through final launch preparations ahead of a planned liftoff next Saturday, Jan. 18, during a four-hour window opening at 8 a.m. EST (1300 GMT).

The high-altitude abort demonstration will be the final major test flight of the Crew Dragon spacecraft before it is cleared to fly astronauts. A two-man team of veteran NASA shuttle astronauts is assigned to the Crew Dragon’s first piloted flight, designated Demo-2, later this year.

NASA astronauts Doug Hurley and Bob Behnken, who are assigned to the Demo-2 mission, are expected to participate in a countdown practice run at pad 39A next week with the Falcon 9 and Crew Dragon spacecraft.

The in-flight abort test itself next Saturday will be performed with no astronauts on-board the Crew Dragon.

The in-flight abort test will involve a full-up Crew Dragon spacecraft, with all its engines, computers and other key systems, launched atop a full-size Falcon 9 rocket from pad 39A at NASA’s Kennedy Space Center in Florida.

SpaceX will launch the Falcon 9 rocket from pad 39A to simulate a crewed flight to the International Space Station, but the launcher’s first stage engines will be programmed to shut down about 88 seconds after liftoff as the launcher arcs toward the east from Florida’s Space Coast.

The premature engine cutoff will be followed by an automated abort command on the Crew Dragon spacecraft, triggering ignition of the ship’s eight SuperDraco escape thrusters.

The SuperDraco engines will rapidly power up to full throttle, producing up to 130,000 pounds of thrust for less than 10 seconds to push the Crew Dragon capsule away from the top of the Falcon 9 rocket.

The in-flight abort test is timed to demonstrate the capsule’s escape system under the most extreme aerodynamic forces during launch.

Smaller thrusters will orient the crew capsule for separation of its unpressurized trunk, then deployment of parachutes before splashing down in the Atlantic Ocean east of Cape Canaveral.

The Falcon 9 booster is expected to break up due to extreme aerodynamic loads during the abort sequence. According to previously-released environmental review documents, the Falcon 9 will fly without a second stage engine on the in-flight abort test because the escape maneuver will occur during the first stage burn.

SpaceX performed a test of the Crew Dragon abort system in 2015 to simulate an escape maneuver from the launch pad, and then company completed a test-firing of the SuperDraco engines in November on the Crew Dragon vehicle set to fly on the high-altitude escape test.

The SuperDraco hotfire test verified the effectiveness of SpaceX’s design changes in the Crew Dragon propulsion system after a previous capsule exploded during a similar ground firing earlier last year. 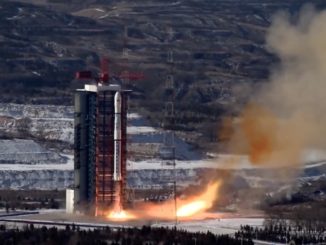 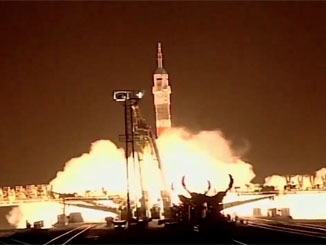