A Russian satellite launched Tuesday from the Baikonur Cosmodrome in Kazakhstan, riding a Proton booster and Block DM upper stage toward a position in geostationary orbit to provide weather observations over Siberia, other parts of Russia’s Far East, and the Asia-Pacific region.

The Proton rocket’s six RD-276 main engines ignited to thrust the heavy-lift booster off its launch pad at Baikonur at dusk. The six main engines, fed by hydrazine fuel, propelled the 189-foot-tall (57.6-meter) launcher toward the northeast.

The Block DM, built by Energia and fueled by kerosene and super-cold liquid oxygen, ignited its main engine three times to first place the Elektro-L 3 weather satellite into a preliminary parking orbit, then to raise the orbit’s apogee, or high point, and finally to lower the orbit’s inclination to 0.6 degrees to the equator and circularize its altitude at around 22,000 miles (35,400 kilometers).

Designed for a 10-year lifetime and built by the Russian aerospace contractor NPO Lavochkin, the Elektro-L 3 satellite joins two previous Elektro-L weather observatories launched in 2011 and 2015.

NPO Lavochkin confirmed in a statement that the Elektro-L 3 spacecraft was deployed into the mission’s targeted orbit, and ground controllers took control of the satellite as planned. The satellite was expected to unfurl its power-generating solar panels and fine-tune its orbit over the equator, where its speed will match the rate of Earth’s rotation, giving the new weather sentinel a constant view of Russia’s Far East, the Asia-Pacific region, and much of the Pacific Ocean.

The Elektro-L 3’s planned observation post will be over the equator at 165.8 degrees east longitude, joining the other two operational members of Russia’s Elektro-L weather satellite fleet, which are parked in geostationary orbit at 76 degrees east and 14.5 degrees west.

The first two Elektro-L satellites launched from Kazakhstan on Ukrainian-made Zenit rockets. But officials switched the launch of the Elektro-L 3 spacecraft to a Russian-built Proton rocket due to rising tensions between Russia and Ukraine in the wake of Russia’s annexation of Crimea.

Like its two predecessors, the Elektro-L 3 satellite will capture images of storm systems and clouds across its coverage zone. The spacecraft will also measure sea states and ocean temperatures, track changes in snow cover, and collect high-altitude atmospheric data to help forecast conditions for air travel.

The satellite also carries instruments to monitor space weather and a search-and-rescue communications payload, according to information published by Roscosmos. 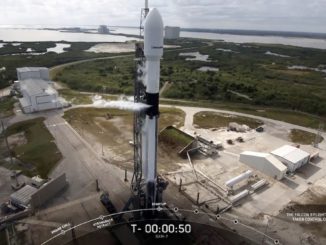 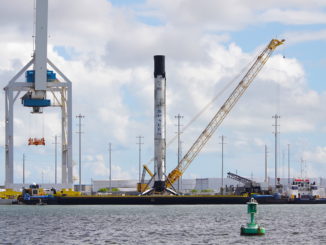 Another recovered Falcon 9 booster arrives back in port 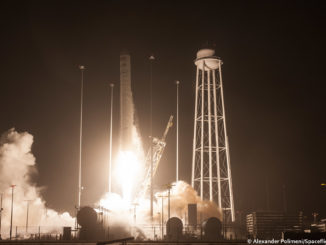