After poor weather scrubbed a launch attempt Tuesday, Blue Origin plans to launch the 12th flight of the company’s New Shepard suborbital booster Wednesday from West Texas with a package of research payloads.

Liftoff of the single-stage booster was planned Tuesday from Blue Origin’s test site in West Texas, a sprawling ranch owned by company founder Jeff Bezos. Blue Origin scrubbed the launch due to poor weather in the area, and announced a new launch attempt Wednesday.

When it blasts off, a hydrogen-fueled BE-3 engine will power the New Shepard booster off the launch pad.

Blue Origin aims to launch people on future Blue Origin flights, giving tourists and researchers brief experiences of microgravity and expansive views of Earth from altitudes over 62 miles, or 100 kilometers, above the internationally-recognized boundary of space.

We are scrubbing today’s #NewShepard launch due to weather conditions. Our next launch attempt will be tomorrow morning, Wed. Dec. 11. Awaiting target launch time from the mission team, updates to come. #NS12

Up to six passengers will ride inside a pressurized crew capsule on top of the New Shepard rocket. The reusable capsule and booster will separate after the launch sequence roughly two-and-a-half minutes after liftoff, coast to apogee and experience three-to-four minutes of weightlessness, then begin their separate descent profiles back to Earth.

The booster will deploy air brakes, reignite its BE-3 engine and extend landing legs to target a vertical propulsive touchdown on a landing pad near the New Shepard launch site in West Texas. The capsule will unfurl parachutes and land on the desert floor with the air of retrorockets, ending the mission around 10 minutes after liftoff.

“This particular rocket has been an operational payload vehicle for several flights, meaning there are no more updates to the system,” Blue Origin said in a statement before this week’s mission.

Research and outreach payloads are stowed aboard the New Shepard crew capsule for this week’s launch, including thousands of postcards from students around the world who participated in a campaign by Blue Origin’s nonprofit group Club for the Future.

The nonprofit invited students to illustrate their visions for the future of space exploration on postcards, then submit the art to fly to space on a New Shepard rocket. Blue Origin promises to mail the postcards back to students after the flight. The nonprofit says its goal is to inspire future generations to pursue careers in science, technology, engineering and math.

Also aboard the New Shepard rocket are two winning art projects from a contest organized by Blue Origin in collaboration with the rock band OK Go, and an educational payload from undergraduate students at Columbia University to study the acute impacts of microgravity on cell biology.

There is also a NASA investigation called OSCAR to study how trash on human deep space missions might be recycled and reused. Developed at NASA’s Kennedy Space Center in Florida, the experiment will evaluate technology in microgravity that could convert waste and produce gases for propulsion and life support needs on future long-duration spaceflights.

Blue Origin could launch its first flight with human passengers next year, but a more specific timeframe for the mission remains elusive.

“As we move towards verifying New Shepard for human spaceflight we are continuing to mature the safety and reliability of the vehicle,” Blue Origin said.

Greg Johnson, head of Blue Origin’s New Shepard program, said in October that the company is doing its “due diligence” in checking the rocket’s design before flying people. The design verification process is focused on human-rating the New Shepard booster and crew capsule.

Blue Origin’s next New Shepard booster will be the vehicle that flies humans, and it’s undergoing checkouts at the company’s West Texas launch base after delivery from its factory in Kent, Washington. The new crew capsule includes the environmental control and life support system needed for people, Johnson told Spaceflight Now.

Another New Shepard is in production at Blue Origin’s Kent facility, he added.

In May, when Blue Origin last flew its New Shepard booster, the company said the first human flight could occur toward the end of 2019. 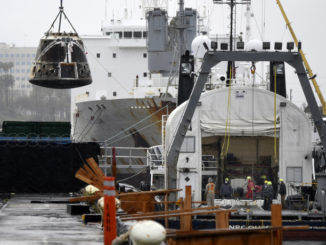 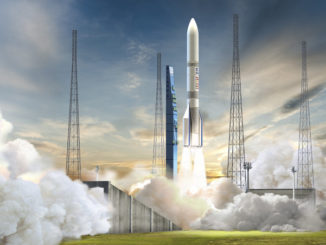 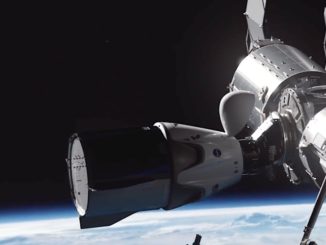