Astronauts will likely perform a previously-unplanned demonstration of the Orion spacecraft’s deep space rendezvous capabilities in a high-altitude orbit around Earth on the crew capsule’s first piloted test flight, now scheduled for 2023.

The new objective on the first piloted Orion test flight would allow astronauts and engineers to evaluate the capsule’s ability to approach another spacecraft, demonstrating the rendezvous system before it’s needed on future missions to dock with a lunar lander and the planned Gateway mini-space station in orbit around the moon.

The astronauts on the first crewed Orion flight, named Artemis 2, will oversee the ship’s ability to operate in close proximity to another object in space, likely either the upper stage of the Orion’s rocket or a satellite carried as a piggyback payload, NASA officials said last week.

“In order to go ahead and buy down risks for future dockings of Orion, on the Artemis 2 mission, we are planning to do a rendezvous and proximity operations demonstration,” said Doug Loverro, head of NASA’s human spaceflight directorate, in a May 13 meeting of the NASA Advisory Council’s Human Exploration and Operations Committee.

Adding the new test to the Artemis 2 mission will help engineers “understand the handling characteristics of Orion, (and) make sure that we have the simulators correct on Earth so we can get that actual real-time feedback in orbit,” Loverro said.

The rendezvous maneuvers will also verify the performance of the Orion spacecraft’s laser and imaging sensors used to navigate around other objects in space, Loverro said.

Under the scenario being studied by NASA, the Orion spacecraft would not actually perform a docking on the Artemis 2 mission. That would wait until the following flight, named Artemis 3, when NASA hopes to send astronauts to the moon for the first time since the end of the Apollo program in 1972.

Adding the rendezvous demonstration to the Artemis 2 mission would be a “benefit to us in understanding how the Orion system moves and operates in space,” said Marshall Smith, director of NASA’s human lunar exploration programs.

Smith said modifying hardware and developing a target for the Orion spacecraft to perform an actual docking demonstration on Artemis 2 would be too costly. He said such a change would not offer a significant benefit to NASA because a similar docking system to Orion’s will be tested at the International Space Station.

While Loverro said NASA is planning a rendezvous test on Artemis 2, Smith said details have not been finalized.

“The bottom line is we will probably will go and do a rendezvous and prox ops (proximity operations) activity on Artemis 2,” Smith said. “We haven’t finalized that yet, but we’ve now narrowed it down to a couple of options we think are doable.”

The Orion spacecraft — built by Lockheed Martin — will launch on top of NASA’s Space Launch System, a heavy-lift rocket comprised of core stage with four leftover engines from the space shuttle program, and two side-mounted solid-fueled boosters. On the first version of the SLS, named Block 1, a modified upper stage originally designed for United Launch Alliance’s Delta 4-Heavy rocket will send the Orion capsule into orbit.

The Artemis 2 flight plan has been in the works for several years. The SLS upper stage — known as the Interim Cryogenic Propulsion Stage, or ICPS — will place the Orion spacecraft into an elliptical, or egg-shaped, orbit stretching more than 21,000 miles (35,000 kilometers) from Earth.

The high-altitude orbit will allow the Orion astronauts to test the craft’s life support systems for a couple of days before heading on a trip around the moon and back to Earth. The Orion spacecraft could perform the rendezvous demonstration in that phase of the mission, when the capsule is thousands of miles from Earth but not yet on the way to the moon.

“One of the things that I think we all learned from Apollo, and that I think we need to make sure we learn here, is that missions build upon one another,” Loverro said. “We don’t need to take the giant leap all at one time.”

Smith said NASA is evaluating whether to use the SLS upper stage or a satellite carried on the same rocket with with the Orion spacecraft. He added that there are “schedule reasons” why NASA may not want to modify the SLS upper stage to fill the role of the docking target, but the agency has made no final decisions on the matter.

Adding the rendezvous demonstration is “one change that we’re probably going to make,” Smith said. “At least I’m going to recommend.”

The Artemis 2 mission will follow the Artemis 1 test flight, in which an unpiloted Orion spacecraft will lift off from the Kennedy Space Center on the inaugural SLS launch. The mission will last 26 to 42 days, depending on when the launch occurs, and the Orion spacecraft will enter a distant orbit around the moon for a series of checkouts before coming back to Earth for re-entry and splashdown in the Pacific Ocean.

The Artemis 1 launch is now scheduled for November 2021, around four years later than NASA envisioned when the SLS program was conceived in 2011. And that schedule does not account for schedule slips stemming from the coronavirus pandemic, which has forced NASA to pause preparations for a test-firing of the first SLS core stage at the Stennis Space Center in Mississippi.

The Artemis 2 mission — the first SLS/Orion flight with astronauts — is scheduled for launch from the Kennedy Space Center in 2023, according to Kathryn Hambleton, a NASA spokesperson.

The White House directed NASA last year to land astronauts on the moon’s south pole before the end of 2024. NASA renamed its moon program Artemis, the twin sister of Apollo in Greek mythology, and laid out an accelerated timeline to bring the next crewed lunar landing mission from 2028 to 2024.

Under NASA’s current plan, the moon landing could occur on the Artemis 3 mission in 2024, but the schedule is aggressive. The development of a human-rated lunar lander is in the critical path for a 2024 moon landing.

NASA selected industry teams led by Blue Origin, Dynetics and SpaceX last month to mature their concepts for a crewed lunar lander. The space agency and contractor teams will refine requirements and mission architecture choices over the next 10 months, then NASA is likely to select two landers to proceed into full-scale development.

Loverro, who joined NASA as the agency’s top human spaceflight manager late last year, spent the first several months of his tenure overseeing a review of the Artemis program’s schedule. The reviewers concluded NASA should reorganize parts of the agency’s Human Exploration and Operations Mission Directorate, and establish a systems engineering and integration authority responsible for orchestrating end-to-end mission analysis for the Artemis program.

NASA should also identify programs managers for all phases of the Artemis program, which both aims to get astronauts to the moon in 2024 and develop a “sustainable” human presence around the moon by 2028, Loverro said.

The Gateway, a mini-space station to be assembled in lunar orbit, is needed to achieve an enduring lunar program, according to NASA officials. Agency managers say the Gateway will eventually be used as a staging point for astronauts on the way to the surface of the moon, accommodating reusable lunar landers and contributions from international partners. The Gateway outpost will also host a range of science experiments.

But NASA has decided not to use the Gateway for Artemis 3, the program’s first human landing attempt, in order to alleviate schedule pressure, Loverro said. Instead, astronauts on the Orion capsule will directly link up with a lunar lander in an elliptical halo orbit around the moon, then proceed to the surface.

According to NASA’s current plan, the landing vehicle will launch on a commercial rocket without anyone on-board, then maneuver into lunar orbit to await the arrival of the Orion crew.

Loverro told Spaceflight Now last month that NASA still wants to use the Gateway for subsequent Artemis landing missions, beginning with Artemis 4. The first elements of the Gateway could still be in position around the moon in time to provide communications relay support for Artemis 3, he said.

Another major change to the Artemis architecture in the last few months involves how NASA plans to launch the first two Gateway modules. The Gateway’s Power and Propulsion Element, or PPE, and the Habitation and Logistics Outpost, or HALO, were originally to launch on separate commercial rockets, then autonomously rendezvous and dock in the vicinity of the moon.

NASA last year announced its selection of Maxar to build the PPE, which provides power generation and solar-electric propulsion for the Gateway. Northrop Grumman will supply the HALO module, which is based on the pressurized section of the company’s Cygnus space station supply ship.

Loverro said launching the two elements on the same rocket would save money and reduce the risks of something going wrong during the docking near the moon.

“And then the complexity of routing all of the power for the long-term for the Gateway through that docking mechanism, and fluids and other things that we needed to do, all made that system quite complex,” Loverro said. “We realized that if we could put it all together on the ground, we got rid of all that risk and reduced the cost, not just because we saved a launch vehicle but because we got rid of a whole bunch of added complexity in the system.”

The combined launch of the PPE and HALO modules will require a rocket with a longer payload fairing. It turns out the U.S. military needs a rocket with a similar payload envelope, so companies are already working on extended fairings to satisfy national security requirements.

The Space Force plans to select two providers as soon as next month to be eligible to win national security launch contracts in competitions held between 2020 and 2024 for missions launching through 2027.

SpaceX’s Falcon Heavy is the only rocket in the ongoing military launch competition that is currently operational. United Launch Alliance, Blue Origin and Northrop Grumman are also competing in the ongoing launch service procurement, and each has proposed new rockets still in development.

Dan Hartman, NASA’s Gateway program manager, said May 13 that the PPE and HALO elements will be connected together with an adapter on the ground, allowing engineers to route power and data connections before launch.

“And then the docking systems, this inter-element adapter will take care of the structural, mechanical, power and fluids interfaces for us,” Hartman said.

Northrop Grumman will manage work to perform the connections between the PPE and HALO modules at the Kennedy Space Center in 2023, Hartman said. The elements are scheduled for launch in November 2023, according to NASA.

NASA released a draft request for launch services proposals May 6 to lay out the performance requirements for the mission. NASA’s Launch Services Program at Kennedy, which oversees launch procurement for the agency’s robotic science missions, plans to select a rocket for the Gateway launch by “late fall” of this year, Hartman said.

Before deciding to go for the tandem launch, NASA officials said they confirmed at least one company will have the ability to launch the modules together on the same rocket.

“We’ll see what we get,” Hartman said. “There could be options out there when we get the proposals back in, but we did check with one, and we think we’re in good shape there.” 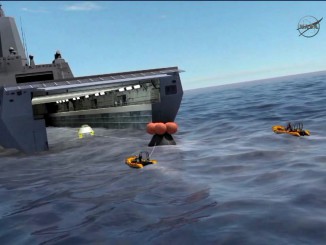 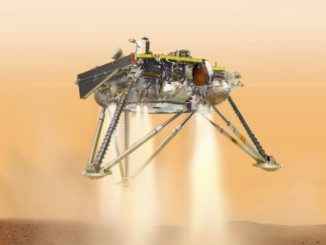 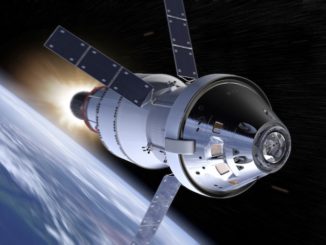