A Northrop Grumman Antares rocket, upgraded to carry heavier payloads into orbit, lifted off Saturday from a launch pad on Virginia’s Eastern Shore with a Cygnus supply ship in pursuit of the International Space Station with fresh food, a collection of biological and technology demonstration experiments, a zero-g baking oven, and repair gear for an aging $2 billion particle physics experiment.

Thanks to upgrades that debuted with Saturday’s mission, Antares rocket and the Cygnus cargo craft carried the heaviest supply load ever launched toward the space station by a commercial U.S. logistics vehicle. The supplies are due to arrive at the station early Monday.

Two Russian-made RD-181 main engines powered the Antares rocket off the launch pad, and the booster arced through clear skies toward the southeast over the Atlantic Ocean with more than 860,000 pounds of thrust. Modifications to the first stage structure allowed the RD-181 engines to fly at full throttle through the thick lower layers of the atmosphere, rather than throttling down to ease aerodynamic pressure on the rocket.

A little more than three minutes after liftoff, the Antares rocket shut down its RD-181 engines and the launcher’s Ukrainian-built first stage dropped away to fall into the Atlantic Ocean.

The Antares rocket’s payload shroud and interstage connecting structure then jettisoned, allowing the U.S.-built Castor 30XL upper stage to ignite its solid rocket motor for a nearly three-minute firing to propel the Cygnus spacecraft into orbit.

The higher thrust setting on the first stage engines, the lightened rocket structure, and the modified injection orbit gave the Antares 230+ rocket the capability to deliver up to 1,760 pounds (800 kilograms) of additional mass into low Earth orbit, according to Kurt Eberly, Northrop Grumman’s vice president for the Antares program

The AJ26s were modified decades-old NK-33 engines originally developed for the ill-fated Soviet-era N1 moon rocket, then kept in storage until their import to the United States in the 1990s. Investigators traced the cause of a dramatic Antares rocket explosion during a 2014 launch to an AJ26 engine, and officials from Orbital Sciences — now part of Northrop Grumman — elected to purchase newly-built RD-181 engines for future Antares flights.

The cargo mission that launched Saturday, known as NG-12, is the first in the company’s follow-on Commercial Resupply Services-2 contract with NASA. It follows 11 resupply launches under a previous CRS contract.

In addition to the Antares upgrades, Northrop Grumman engineers are adding capability to the Cygnus cargo craft under the second CRS contract.

“Over time, we’re continually upgrading the system, not only to add more cargo but to add more capability to the spacecraft,” DeMauro told Spaceflight Now in a pre-launch interview. “For CRS-2, I think the best way to describe it is we’re taking a step function up and even further increasing our focus on our ability to support science to the ISS.”

The Cygnus spacecraft for the NG-12 mission launched with 10 mid-deck lockers for stowage and experiments, and six of the lockers will be powered throughout the flight to the space station. That’s an improvement from six lockers — and four powered lockers — on the NG-11 mission.

“Primarily, that’s the cargo that gets loaded in the final load because it’s the science that gets delivered to the ISS for the crew to run the experiments on,” DeMauro said.

In another first for Cygnus, the NG-12 mission will dispose of two decommissioned experiments mounted outside the space station, a role previously reserved for SpaceX’s Dragon and Japan’s HTV cargo vehicles.

The Cygnus spacecraft will depart the space station in January with NASA’s Space Debris Sensor, an experiment that failed soon after its installation on the orbiting complex in 2018, and the European Space Agency’s SOLAR instrument, which monitored the sun’s output for more than nine years.

The two experiment packages will burn up during re-entry with the Cygnus spacecraft, once the Cygnus completes a series of CubeSat deployments after flying away from the station.

But the Cygnus spacecraft must first complete its cargo delivery to the space station.

NASA astronaut Jessica Meir will be at the controls of the space station’s Canadian-built robotic arm Monday to capture the Cygnus cargo freighter as it approaches the complex.

The Cygnus spacecraft, named the S.S. Alan Bean in honor of the late Apollo and Skylab astronaut, is packed with 8,168 pounds (3,705 kilograms) of supplies and experiments heading to the International Space Station. Here’s a breakdown of the cargo manifest provided by NASA:

There were 15 small satellites riding aboard the Cygnus spacecraft for Saturday’s launch.

The biggest of the group is a U.S. Air Force satellite named STPSat 4, which weighs roughly 220 pounds (100 kilograms) and will be transferred into the space station’s Kibo module by astronauts after Cygnus arrives at the orbiting research complex. Sponsored by the military’s Space Test Program, STPSat 4 will be one of the largest satellites ever deployed from the space station.

Craig Technologies, based on Florida’s Space Coast, is providing integration services for the STPSat 4 spacecraft, which will be released from the Space Station Integrated Kinetic Launcher for Orbital Payload Systems, or SSIKLOPS, deployer. The mechanism, which was first used in 2014, is designed to release small satellites with masses between 100 and 200 pounds.

The other CubeSats on-board the NG-12 mission are sponsored by NASA, the Air Force, and the National Reconnaissance Office. NanoRacks, a Houston-based space services company, arranged the launch of most of the CubeSats.

Some will be ejected from the space station after the Cygnus spacecraft’s arrival, and others will be released from the Cygnus itself after the cargo vehicle departs the station in January.

The Cygnus also carries the final hardware for a series of ambitious spacewalks later this month to install a new coolant system on the Alpha Magnetic Spectrometer, which is searching for evidence of dark matter and antimatter in the universe.

Mounted on the space station’s truss on the penultimate space shuttle mission in 2011, the Alpha Magnetic Spectrometer is effectively a powerful magnet that attracts cosmic rays, subatomic particles traveling through space at nearly the speed of light.

Three of the four coolant pumps on AMS’s silicon tracker, which measures the trajectory and energy of the cosmic rays captured by the instrument, have failed, prompting NASA engineers to develop a plan to repair the coolant system. The work required the development of special tools to cut into the AMS instrument, install new hardware, and re-seal tiny coolant lines.

The Alpha Magnetic Spectrometer was never designed to be serviced in space. Read our earlier story for details on the repairs.

Other payloads aboard the Cygnus supply ship launched Saturday included a rodent research experiment. Scientists loaded mice into the spacecraft to investigate how the animals respond to changes in their “circatidal” clock in microgravity.

The 12-hour circatidal clock, in which animals experience equal amounts of light and dark phases each day, is associated with maintaining stress responsive pathways. Scientists want to know if exposure to microgravity changes the animals’ circadian rhythm.

Recent research shows that genes associated with the 12-hour clock are linked with the most common form of human liver disease. The rodent research experiment on the space station could reveal new insights into liver disease, and give scientists ideas for new pharmaceutical treatments, according to NASA.

The Cygnus also launched with an experimental garment that astronauts could use to protect themselves from harmful radiation on future deep space missions to the moon and Mars, outside the natural shielding of Earth’s magnetic field.

The AstroRad Vest could shield astronauts from radiation from unpredictable solar storms, which can deliver enough radiation in a few hours to cause serious health problems for space fliers, officials said.

“Our innovation was selective shielding, so we’re selectively shielding those organs that are most prone to either acute radiation syndrome or a cancer down the road,” said Oren Milstein, co-founder and chief scientific officer for StemRad, an Israeli company that originally developed the vest garment to protect first responders from radiation during a nuclear accident.

StemRad is partnering with Lockheed Martin, the prime contractor for NASA’s Orion crew capsule, to transfer the vest technology to space.

Astronauts on the International Space Station will wear the vest to check its comfort and function, according to Kathleen Coderre, the AstroRad Vest’s principal investigator from Lockheed Martin.

The vest weighs nearly 50 pounds (about 22 kilograms). Milstein said the garment is made of dense polyethylene embedded in a highly flexible textile mesh.

“It is an ergonomic experiment, so the vest needs to protect the crew from the deep space radiation environment, but it also needs to be comfortable to wear, flexible enough for them to do their daily duties,” Coderre said.

A similar vest will fly on the Orion crew module on the Artemis 1 mission, an unpiloted test flight into orbit around the moon that will verify the spacecraft’s readiness to carry astronaut. That experiment will test the vest’s protective capability in the deep space radiation environment, which is more harsh than the radiation present at the International Space Station in low Earth orbit.

The Cygnus will also deliver an oven to the space station designed to bake cookies in microgravity, demonstrating technology that will help future crews cook their own food on lengthy expeditions to the moon or Mars.

But an oven in microgravity doesn’t work the same as one on Earth. The heating elements on the Zero-G Oven, developed by Zero-G Kitchen and Nanoracks, are arranged around the oven to focus heat in the center, similar to the way a toaster oven works.

Astronauts will load cookies into the oven on a special tray designed to keep the food from floating away in microgravity. Temperatures inside the oven will reach up to 350 degrees Fahrenheit (177 degrees Celsius) during baking, according to NASA.

The first cookie to be baked in space comes from DoubleTree by Hilton, which provided chocolate chip cookie dough for the baking experiment. 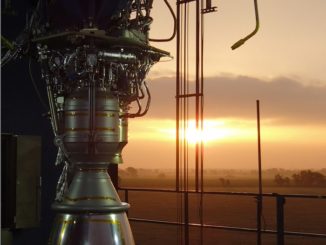 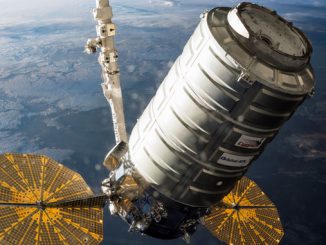 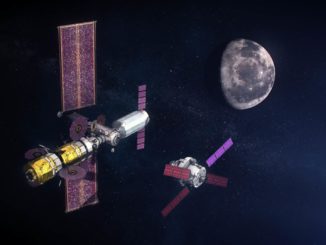