Russian flight controllers devised the plan Saturday, hours after the Soyuz MS-14 spacecraft failed to dock with the station on its first try. Cosmonauts on-board the station commanded the Soyuz MS-14 capsule to abort its approach, and the ship backed off to a safe distance.

Engineers working at Russian mission control in Korolev, near Moscow, determined an amplifier on the space station’s Poisk docking module, located on the zenith — or space-facing — side of the Zvezda service module, was not functioning correctly. The amplifier is part of the passive side of the Kurs rendezvous radar system, which guides approaching Soyuz crew ships and Progress cargo freighters to automated dockings with the space station.

The active side of the Kurs radar system, located on the Soyuz itself, is designed to send signals toward the station to determine the range and closure rate between the two vehicles. The data feeds into the Soyuz flight computer to govern its final approach, firing thrusters to control the ship’s speed and orientation relative to the station.

Roscosmos, the Russian space agency, said in a statement Saturday that Skvortsov and his crewmates will undock their Soyuz MS-13 spacecraft Monday (Moscow time) from a docking port on the aft end of the Zvezda module. Flying the Soyuz by hand, Skvortsov will guide the ship to a manual link-up with the Poisk module, where the automated docking system is no longer functioning.

Skvortsov, a veteran cosmonaut on his third space mission, will practice for the manual docking using a simulator on-board the station, Roscosmos said.

Russian officials said the procedure will clear the Zvezda aft port, which has a working Kurs amplifier, for the Soyuz MS-14 spacecraft to try a second approach to the station Monday. Docking is set for 11:12 p.m. EDT (0312 GMT).

“The situation is complicated, however is under control,” Roscosmos said.

The Soyuz MS-14 spacecraft is the first Soyuz vehicle to fly without a crew in 33 years. Russian space officials ordered the unpiloted test flight to verify the spacecraft’s compatibility with the upgraded Soyuz-2.1a booster, which will replace an older Soyuz rocket model for crew launches beginning next March.

On the unpiloted test flight, the Soyuz MS-14 spacecraft can only dock with the station in automatic mode, using inputs from the Kurs rendezvous radar.

There is no cosmonaut aboard to take manual control, as would be the case on a typical Soyuz mission. The Soyuz MS-14 is also not outfitted with the TORU system, which flies on Progress cargo freighters, allowing cosmonauts inside the space station remotely control the spacecraft for docking if necessary, using a video feed from the approaching vehicle for cues.

Skvortsov and crewmate Alexey Ovchinin monitored the Soyuz MS-14 spacecraft’s rendezvous from inside the station Saturday. The spaceship stopped its approach at a range of about 300 feet, or 90 meters, from the station’s Poisk module after the Kurs system was unable to lock on to the docking target.

Russian flight controllers instructed Skvortsov to issue an abort command from a control panel inside the station. The Soyuz began backing away at 1:36 a.m. EDT (0536 GMT), around five minutes after the planned docking time.

Roscosmos said the Soyuz MS-14 spacecraft’s test flight proceeded according to plan before Saturday’s aborted docking. The successful launch Thursday from the Baikonur Cosmodrome in Kazakhstan bodes well for Russia’s planned switch to the upgraded Soyuz-2.1a rocket for crew launches next year, the Russian space agency said in a statement.

The Soyuz MS-14 spacecraft is set to deliver around 1,450 pounds (658 kilograms) of cargo and supplies to the space station, according to NASA.

The Russian Skybot F-850 robot, a two-legged, two-armed humanoid stand-in for a cosmonaut commander, is strapped into the Soyuz MS-14 spacecraft’s center seat.

Once the Soyuz docks at the station, Skvortsov plans to conduct experiments with the robot for several days. The robot is designed to follow commands and replicate the movements of its human operator.

Before Saturday’s aborted docking, the Soyuz MS-14 spacecraft was scheduled to depart the station and return to Earth with the Skybot F850 robot Sept. 6. Russian officials did not say Saturday if the Soyuz spaceship’s return would remain on schedule after the docking problem. 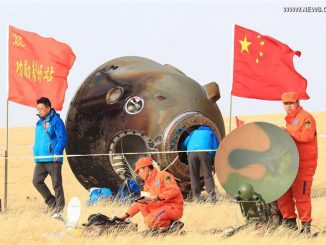 Two Chinese astronauts back on Earth 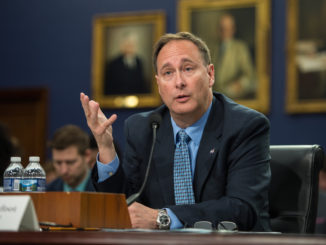