A Chinese Long March 4C rocket failed to place its top secret military payload into orbit Wednesday after a launch from the Taiyuan space base southwest of Beijing, according to the state-run Xinhua news agency.

The three-stage rocket lifted off around 2249 GMT (6:49 p.m. EDT) Wednesday, according to numerous Chinese social media posts from local spectators. The Long March 4C turned toward the south, aiming to place its satellite payload into a polar orbit a few hundred miles above Earth.

But confirmation of the launch did not immediately come through official Chinese media channels, which typically announce a successful mission soon after it is completed. And the U.S. military’s catalog of orbiting space objects did not list any new spacecraft in orbit early Thursday that could be attributed to the Long March 4C launch.

China’s official Xinhua news agency confirmed suspicions that the launch failed in a brief statement released Thursday. Xinhua reported that the Long March 4C’s third stage failed, after good performance by the rocket’s first and second stages during the climb into space from Taiyuan.

The Long March 4C failure Wednesday was the second Chinese launch failure this year, after the debut flight of a new commercial launcher in March by OneSpace.

The most recent failure by the Long March 4C rocket variant, which was used Wednesday, occurred in August 2016. Chinese officials did not acknowledge that accident, in which the civilian Gaofen 10 Earth observation satellite was lost, until several weeks later.

Chinese authorities did not officially announce Wednesday’s launch ahead of time, but the government released airspace warnings to pilots indicating a space launch was planned from the Taiyuan center in northern China’s Shanxi province.

Information from the airspace warnings, which included the locations of drop zones for the Long March 4C’s booster stages, suggested the rocket was heading for a polar, sun-synchronous-type orbit a few hundred miles above Earth. The payload on-board the rocket was Yaogan 33, the latest in a series of Chinese military surveillance satellites.

The Yoagan series of spacecraft include satellites carrying Earth-facing optical telescopes and radar imagers to collect high-resolution imagery for the Chinese military and intelligence agencies.

The Long March 4C rocket flown Wednesday is powered by three liquid-fueled stages. The rocket’s engines burn a combination of hydrazine and nitrogen tetroxide propellants, and the Long March 4C’s third stage is designed to be reignited in space.

The Long March 4-series rockets are built by the Shanghai Academy of Spaceflight Technology, a subsidiary of the government-owned China Aerospace Science and Technology Corp. China’s other Long March rocket versions come from the China Academy of Launch Vehicle Technology, another government-run organization in China’s industrial apparatus.

The third stage blamed for Wednesday’s launch failure is only used on the Long March 4 family of rockets, which could limit the impact of the accident on upcoming missions using other Chinese Long March launch vehicles. 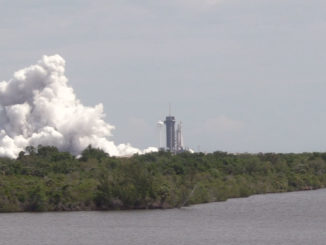