A Boeing-built Intelsat communications satellite launched three years ago is drifting in geostationary orbit after suffering a fuel leak and releasing debris fragments last week, according to an analysis by space surveillance experts.

Ground-based telescopes operated by ExoAnalytic Solutions, a commercial company that tracks objects in space with a network of optical telescopes, show the Intelsat 29e communications satellite is tumbling, leaking propellant and drifting through the geostationary arc, where numerous communications satellites are stationed more than 22,000 miles (nearly 36,000 kilometers) over the equator.

The telescopic imagery also appears to show several pieces of debris came off the satellite last week, according to Bill Therien, executive vice president of engineering at ExoAnalytic Solutions.

In an April 10 statement, Intelsat said the Intelsat 29e spacecraft “experienced damage” on April 7 that resulted in a propellant leak. The event knocked Intelsat 29e out of service, and Intelsat said it was moving customers to other Intelsat satellites and third-party services to mitigate the outage, which affects maritime, aeronautical and wireless operator customers in the Latin America, Caribbean and North Atlantic regions.

In an interview with Spaceflight Now late Friday, Therien said ExoAnalytic’s sensors detected a change in the brightness of Intelsat 29e on April 8, suggesting the spacecraft was tumbling. Tracking data collected by ExoAnalytic also showed the satellite began drifting east from its operational position around the same time.

Intelsat said Intelsat 29e experienced a second anomaly April 9 that caused a loss of communication with the satellite. On April 10, ExoAnalytic’s sensors detected a piece of debris coming off the satellite, followed by more fragments over the next couple of days, Therien said.

Therien said the largest of the debris seen coming off Intelsat 29e is no more than a meter, or about 3.3 feet, in size. A shower of smaller particles observed by ExoAnalytic could be fuel leaking out of the satellite’s propellant tanks, or pieces of the spacecraft itself, Therien told Spaceflight Now.

Intelsat 29e was launched Jan. 27, 2016, aboard an Ariane 5 rocket from French Guiana for a planned 15-year mission. Based on the Boeing 702MP satellite design, Intelsat 29e was positioned in geostationary orbit at 50 degrees west longitude, where its thrusters kept the satellite parked over the same geographic region, with the spacecraft’s orbital velocity matching the rate of Earth’s rotation.

Engineers continue studying the cause of the anomaly on Intelsat 29e, and officials have not said whether the problem originated within the spacecraft or from a collision with a micrometeoroid or a piece of space junk.

The behavior of Intelsat 29e is reminiscent of failures aboard the AMC 9 and Telkom 1 communications satellites in 2017. Both of those satellites shed debris after suffering sudden anomalies in geostationary orbit.

AMC 9 and Telkom 1 — built by Thales Alenia Space and Lockheed Martin, respectively — were near the end of their service lives when those failures occurred, while Intelsat 29e is still a relatively young spacecraft. 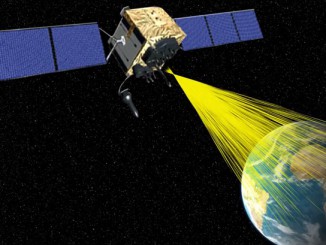 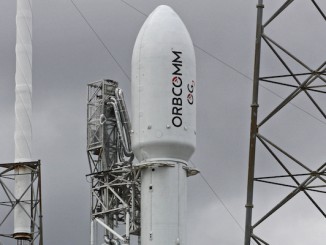 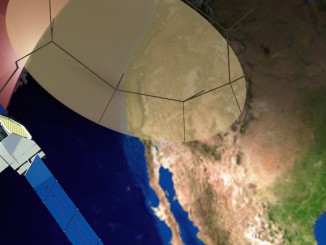