Six satellites built in France for OneWeb are set for blastoff Wednesday from French Guiana, the first of at least 21 launches using Russian-made Soyuz rockets to haul more than 600 of the refrigerator-sized craft to orbit for global broadband service.

Launch is scheduled for 2137 GMT (4:37 p.m. EST) Wednesday from the European-run spaceport in French Guiana, located on the northeastern coast of South America.

The Russian-made rocket aims to deliver the six spacecraft, built by an industrial consortium named OneWeb Satellites formed by Airbus Defense and Space and One Web, to an orbit roughly 600 miles (1,000 kilometers) above Earth.

If the rocket and satellites all work as expected, OneWeb aims to begin a regular cadence of Soyuz launches later this year from launch pads in French Guiana, Russia and Kazakhstan carrying up to 32 satellites at a time.

That will allow OneWeb to have an initial constellation of 600 satellites in orbit. OneWeb has a contract for 21 Soyuz missions with Arianespace, the French launch provider responsible for Soyuz flights from French Guiana.

“This is a huge moment for OneWeb, where we definitively see our satellites, the manufacturing process, the design, the ground systems, all come together,” said Greg Wyler, OneWeb’s founder and chairman, in an interview with Spaceflight Now on the eve of the launch. “The supply chain that has been put together, to be able to produce these satellites in volume, is now culminating in this launch. Assuming that the satellites operate as predicted, we can go right into production.”

Spaceflight Now members can read a transcript of our full interview with Greg Wyler. Become a member today and support our coverage.

OneWeb is at the vanguard of several companies developing “mega-constellations” of hundreds or thousands or small satellites for broadband Internet access.

A launch readiness review at the Guiana Space Center on Tuesday cleared the mission to proceed with a launch attempt today.

Officials pushed back the flight one day to allow time for additional data analysis after a Soyuz launch last week from Kazakhstan encountered an underperformance condition on its upper stage.

But Russian teams in French Guiana pressed ahead with rollout of the Soyuz booster Saturday from its hangar — known by the Russian acronym MIK — to the launch pad. The OneWeb satellites and their Fregat upper stage, already encapsulated inside the Soyuz payload shroud, arrived at the pad Saturday night for mating to the rocket.

After liftoff Wednesday, the Soyuz rocket will head north from French Guiana over the Atlantic Ocean, and drop its four liquid-fueled first stage boosters into the sea around two minutes into the flight.

The Soyuz core stage and third stage will continue firing to place the Fregat upper stage and the OneWeb satellites on a suborbital trajectory. Two burns by the Fregat upper stage engine will maneuver the satellites — which each weigh about 325 pounds (147.7 kilograms) — into a 600-mile-high polar orbit with an inclination of 87.77 degrees, according to Arianespace’s press kit for the mission.

The first pair of OneWeb satellites will deploy from the Soyuz dispenser, specially designed for OneWeb missions by Ruag Space in Sweden, around 63 minutes after liftoff at 2240 GMT (5:40 p.m. EST).

The other four OneWeb spacecraft will release from the carrier module at 2259 GMT (5:59 p.m. EST).

The Fregat upper stage will reignite later for a deorbit burn to steer the spent rocket back into Earth’s atmosphere for a destructive re-entry.

Wyler has corralled blue-chip companies to invest in his dream to beam affordable broadband Internet signals around the world, a mission he sees as a prerequisite to providing billions of unconnected, underserved people with the tools necessary to succeed in a modern marketplace of goods, services and information.

“This is the world’s largest civilian space system, and it’s all put together for the benefit of mankind,” Wyler said Tuesday. “That’s something so exciting, where so many people from so many countries, and investment from every continent of the world, comes together for one mission and one purpose. Ultimately, as we begin connecting the emerging markets to the developed markets, as we begin bringing opportunity and education to people, we’re going to see something wonderful about mankind coming together.”

OneWeb’s investors include Airbus, Coca-Cola, Virgin Group, Qualcomm SoftBank, and Intelsat. Under Wyler’s leadership, OneWeb has raised more than $2 billion to pay for the first series of satellites, their launches, and a new factory at Exploration Park, located just outside the gates of NASA’s Kennedy Space Center in Florida.

OneWeb says it needs at least 600 satellites for global broadband service, but the company plans up to 900 satellites in the first generation network. Wyler said a successful launch of the first six satellites will help the company secure the additional financing needed to pay for the entire project.

“We’ve had a tremendously positive response from investors, as they’ve seen OneWeb come into reality,” Wyler said. “When you scratch the surface and you start to dive deep through our systems, you realize we’ve built the supply chain, we have the spectrum in place, we’ve got the launch licenses, the approvals, we’re building an incredibly safe constellation so we’ll ensure there’s no space debris.

“All of those pieces are in place, and they’ve been in place. We’ve been putting them in place over the last six years, which has given investors quite a bit of confidence in the reality and the background of our system to accomplish this goal. So I am full of optimism.”

Wyler is a serial entrepreneur whose vision led to the creation of O3b Networks, which provides broadband services to a more narrow swath of the world. He also has a passion for using communications to improve the lives of the world’s poor, and spent three years developing Internet infrastructure to connect schools in rural Africa.

OneWeb is his latest, and most ambitious, project. Wyler’s company plans to deploy hundreds of satellites to blanket the world in broadband, enabling anyone at any location on Earth reliable access to the Internet.

Each of the satellites is about about the size of a refrigerator, and are built by an industrial team led by Airbus Defense and Space. Built in an assembly line fashion, they carry plasma thrusters and miniaturized transmitters, antennas and other equipment necessary to broadcast Ku-band signals to support OneWeb’s global network.

The first six spacecraft are pathfinders, and if they work as designed, OneWeb will soon transition its production from Airbus’s factory in Toulouse, France, to the new factory in Florida with a footprint covering more than 100,000 square feet (9,300 square meters).

Officials originally planned to launch 10 pilot satellites on the first Soyuz launch, but OneWeb recently decided to fly six, and keep the other four on the ground as spares.

If something goes wrong with Wednesday’s launch, OneWeb will have the other four satellites ready to fly, ensuring the company meets a regulatory deadline in November to use its allotted radio spectrum.

“We must launch and operate our satellites in order to bring our spectrum into use, in order to maintain our global priority rights to the spectrum for the system we’ve been designing since 2012. So if there is an issue, we have the other four in standby,” he said.

OneWeb has a contract for 21 Soyuz missions with Arianespace. The 21 Soyuz flights, each carrying between 32 and 36 satellites, could take off from the European-run Guiana Space Center, or from cosmodromes in Russia and Kazakhstan.

The first full-scale launch with OneWeb satellites is planned for August or September, again on a Soyuz, from the Baikonur Cosmodrome in Kazakhstan, Wyler said.

At that launch rate, more than 600 OneWeb satellites, which the company says will cost less than $1 million a piece, could be in orbit by the end of 2020, Wyler said.

That’s a best-case scenario, assuming the satellites and rockets can be built and launched efficiently. 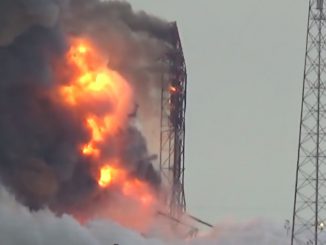 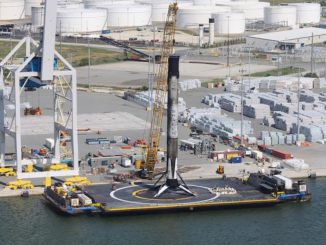 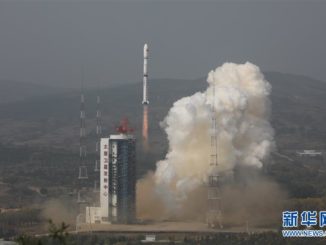