SpaceX is still working on a new, safer helium tank design needed for launches with astronauts, and the debut of the company’s upgraded Falcon 9 Block 5 rocket earlier this month did not count as one of seven successful missions in “crew configuration” NASA says it requires before putting astronauts aboard the vehicle, officials said Thursday.

The update on the development of the Falcon 9’s new helium tank, which is scheduled to fly for the first time later this year, came a week after members of NASA’s Aerospace Safety Advisory Panel said they were getting more comfortable with SpaceX’s plan to load the rocket with super-chilled, densified propellant with astronauts strapped into their Crew Dragon spacecraft on top of the vehicle.

But it didn’t carry a new helium tank design under development as a fix for the problem that caused a booster to explode during a ground test in 2016, according to a report by Quartz which has been confirmed by Spaceflight Now. NASA says SpaceX needs to introduce that change to the Falcon 9 rocket before it starts counting the seven successful launches before a mission with astronauts.

The new helium bottles are known as composite overwrapped pressure vessels, or COPVs, and they store cold helium at high pressures for injection into the rocket’s propellant tanks, maintaining their pressure as the Falcon 9’s engines consume kerosene and liquid oxygen in flight.

SpaceX founder and chief executive Elon Musk told reporters before the May 11 that he believed the Falcon 9 Block 5 configuration that was set to debut with the launch of Bangabandhu 1 was the same version that will fly with NASA astronauts, but added that he “could be mistaken.”

NASA and SpaceX confirmed Thursday that the modified COPVs were not on the May 11 launch, but will instead be flown for the first time on a test mission of the company’s Crew Dragon capsule called Demo-1, currently set for liftoff at the end of August without any astronauts on-board.

Only then will the counter start logging the seven flights of the Falcon 9 in a “frozen” configuration required before a second Crew Dragon demo flight, currently scheduled for December, at the earliest, with two astronauts who will fly to the space station.

“In aerospace, ‘testing like we fly’ is a long standing tenet for safe operations and understanding of critical systems,” said Cheryl Warner, a NASA spokesperson, in response to an inquiry from Spaceflight Now. “We anticipate this configuration will be ready for Demonstration Mission 1.

“NASA will work with SpaceX following each Falcon 9 Block 5 launch to examine data and evaluate the components, systems and operations to add to the rocket heritage,” Warner said in a written statement. “Early Falcon 9 Block 5 flights will provide important insight into the rocket, and will contribute to the certification efforts for the Falcon 9 Block 5 configuration for crew.”

SpaceX and Boeing won multibillion-dollar contracts in 2014 to develop, build and fly commercial capsules to ferry astronauts between Earth and the International Space Station. Once the vehicles are certified by NASA, they will rotate station crews up and down several times per year, ending U.S. reliance on the Russian Soyuz spacecraft for astronaut transportation.

NASA officials have been cautious in their assessments of Boeing and SpaceX schedules, saying further delays in both vehicles are likely, with the first crew test flights potentially slipping into 2019.

Problems with the Falcon 9’s COPVs, or their associated hardware, were blamed for two rocket failures in June 2015 and September 2016.

In 2015, a strut connecting one of the helium vessels inside the Falcon 9’s second stage liquid oxygen tank broke a few minutes after liftoff, rupturing the upper stage propellant tank and leading to the destruction of the rocket and a Dragon supply ship en route to the International Space Station.

SpaceX stopped using the type of strut that failed in 2015 when flights resumed later that year with an upgraded “full thrust” version of the Falcon 9 using colder-than-normal kerosene and liquid oxygen propellants, which are chilled and densified to provide extra engine performance.

Another Falcon 9 rocket mishap in September 2016, when a booster exploded during a launch pad test and destroyed a $200 million Israeli-owned commercial telecom satellite, was also blamed on a flaw with the upper stage’s helium pressurant tanks.

SpaceX engineers believe that failure most likely started when liquid oxygen propellant froze in a buckle or void between the aluminum liner and carbon overwrap of one of the COPVs. While investigators were unable to pinpoint a “root cause,” engineers concluded the solid oxygen likely ignited from friction or breaking fibers on the outside of the helium tank, causing the Falcon 9’s upper stage to burst in a ball of flame.

SpaceX modified its fueling and helium loading procedures after the September 2016 accident to prevent solid oxygen from forming, and a new COPV design incorporates changes the company says will eliminate the buckles altogether.

The company has completed development, significant qualification testing and manufacture of the modified helium bottles that will fly inside the Falcon 9 rocket on the Demo-1 mission with the Crew Dragon spacecraft.

“Falcon 9 Block 5’s first flight serves as an important milestone toward flying crew to the International Space Station later this year,” a SpaceX spokesperson said in a statement. “Starting with our first Block 5 launch, and working closely with NASA, SpaceX will evaluate the components, systems and operations from each Falcon 9 Block 5 mission to document the vehicles flight heritage and assure our development of the most advanced, reliable and safest human spaceflight system ever built.”

“The amount of testing and research that’s gone into COPV safety is gigantic,” Musk told reporters May 10. “This is, by far, the most advanced pressure vessel ever developed by humanity. It’s nuts.”

“I’ve personally gone over that design, I lost count how many times,” Musk said. “The top engineering minds at SpaceX have agonized over this. We’ve tested the living daylights out of it, and we’ve had deep, deep discussions with NASA about this. I think we’re in a good situation.”

Musk said SpaceX has a contingency plan to swap out the redesigned carbon-fiber/aluminum COPVs for Inconel spheres.

“I think that is unlikely to be necessary,” Musk said.

The redesigned helium bottles are one of the top technical issues being tracked by NASA managers and a panel of safety advisors charged with overseeing the agency’s human spaceflight programs.

Some engineers and external reviewers have also raised concerns about SpaceX’s proposal for astronauts to board the Crew Dragon spacecraft before fueling of the Falcon 9 rocket, and those worries were amplified after the 2016 explosion during a countdown for a static fire test at Cape Canaveral.

SpaceX typically loads super-chilled propellants into the Falcon 9 rocket in the final hour of the countdown, a timeline the company’s managers have proposed keeping for crewed launches. In contrast, the United Launch Atlas 5 rocket, which will deliver Boeing’s CST-100 Starliner crew craft to orbit, will be fueled several hours before liftoff, before astronauts board the vehicle.

Filling of the space shuttle’s external fuel tank started nine hours before launch, but like with the Atlas 5, cryogenic propellants were slowly pumped into the shuttle to replace the liquids that boiled off during the countdown.

NASA is still considering the final-hour fueling plan proposed by SpaceX, known as “load-and-go,” but agency managers are expected to decide soon whether to approve it.

SpaceX officials have said the risk to astronauts from a mishap during fueling would be mitigated by the Crew Dragon’s launch abort system, which could be activated to push the capsule away from an explosion on the launch pad. Ground crews would also be evacuated before fueling, reducing their risk exposure during a countdown.

Brent Jett, a former space shuttle commander and member of the Aerospace Safety Advisory Panel, said May 17 that a recent report completed by the NASA Engineering and Safety Center provided the safety committee and NASA managers “an in-depth analysis of the hazards and controls associated with load-and-go.”

“This report, which identified a few previously unrecognized hazard causes, proved very valuable to the commercial crew program,” Jett said in the safety panel’s May 17 meeting at the Kennedy Space Center in Florida.

“My sense is that, assuming there are adequate, verifiable controls idenfitied and implemented for the credible hazard causes, and those which could potentially result in an emergency situation, or worse, loss of crew and vehicle, it appears that load-and-go is a viable option for the program to consider,” Jett said.

Other members of the panel agreed with Jett’s assessment.

“It appears that if all the approriate steps are taken to address the potential hazards, that the risk of launching the crew in the load-and-go configuration could be acceptable,” said Patricia Sanders, chair of the ASAP.

“The other important factor as NASA considers recommendations on this topic, I think, is to look at this from a system point-of-view,” said George Nield, former head of the FAA’s commercial space office and now an ASAP member. “So not only crew safety, but also ground crew safety is an important factor.”

Musk said May 10 that he thinks the load-and-go fueling question is “overblown.”

“We certainly could load the propellant, and then have the astronauts board Dragon,” Musk said. “That is definitely something we could do. But I don’t think it’s going to be necessary any more than passengers on an aircraft having to wait for the aircraft to be full of fuel before boarding.

“Obviously, our competitors are going to make hay of it, but I do not see this as a risk representing any materiality, and in a worst-case scenario, we’ve already demonstrated that Dragon is fully capable of a safe abort from zero velocity and zero altitude, and escaping whatever fireball may occur on the pad in a worst-case situation,” Musk said.

“I really do not think this presents an issue for astronauts, but if, for any reason, NASA felt different, then we can adjust our operational procedures to load propellant before the astronauts board.”

In his presentation to the ASAP on May 17, Jett emphasized the importance of the redesigned COPV.

“The panel has consistently maintained that understanding the behavior of the COPV in the densified cryo environment, and identifying all the potential ignition scenarios, was critical to controlling that potential hazard,” Jett said. “Despite the challenges, and there still are some remaining, NASA and SpaceX are laser focused on this task, and the panel seems to be comfortable with their approach of defining the boundaries through test, and then establishing adequate safety margins for operations.”

“Whether you load the crew first and then propellant, or propellant then crew, either way, the COPV issue has to be resolved,” Jett said. “You have to be comfortable with the COPV situation. While some people like to sort of link those two issues, I think you just have to get comfortable with the COPV, and then look at the hazards associated with the transient of having the crew on-board during fueling. And if you can adequately control those hazards … there are some very positive aspects to loading the crew first.”

Comments removed due to insulting language. 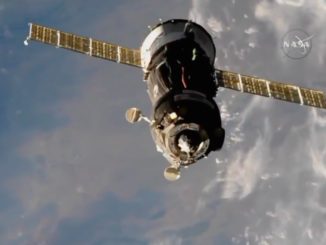 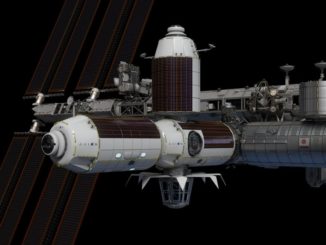 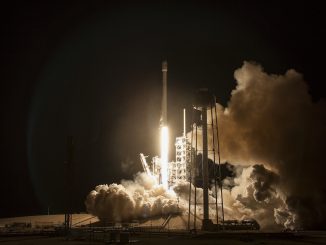 Photos: Falcon 9 flies off pad 39A