NASA officials have determined that the robotic InSight lander is ready for its mission to Mars after concluding that the probe should not suffer the same flaw that led to a crack in a heat shield undergoing tests for the space agency’s Mars 2020 rover, InSight’s chief scientist said Monday.

Managers who participated in a flight readiness review Monday gave approval for ground teams to continue InSight launch preparations at Vandenberg Air Force Base in California, keeping the mission on schedule for liftoff on an Atlas 5 rocket Saturday during a two-hour window opening at 4:05 a.m. PDT (7:05 a.m. EDT; 1105 GMT).

Engineers took an extra look at data gathered during tests of the InSight lander’s heat shield after a separate team discovered a circumferential fracture last month in the heat shield for NASA’s Mars 2020 mission.

NASA ordered the construction of a new heat shield for the Mars 2020 mission, which aims to place a rover on the red planet, and the replacement should be ready in time for the rover’s planned July 2020 launch date, agency officials said.

But InSight, ferrying a suite of seismic and heat flow instruments to the red planet, was less than a month from launch when engineers found the crack in the Mars 2020 heat shield. The stationary InSight lander carries a thermal protection shell around half the size of Mars 2020’s heat shield, and with key design differences, but InSight was built by Lockheed Martin, the same contractor in charge of the Mars 2020 heat shield.

“Our heat shield is not very similar to Mars 2020’s, but of course, we use some of the same processes and some of the same designs,” said Bruce Banerdt, InSight’s principal investigator at NASA’s Jet Propulsion Laboratory in Pasadena, California. “When they had that issue, we went back, re-looked at all of our test data, and made sure that the tests we did were the appropriate tests, and that they would have presumably found the same kind of issue.”

Banerdt said Monday that engineers examined photo documentation and inspection reports to “double- and triple-check” InSight’s heat shield, making sure teams did not overlook a problem during construction and pre-flight ground testing.

Ground crews were unable to do another inspection of InSight’s 8.7-foot-diameter (2.6-meter) heat shield because the spacecraft was already in launch configuration. The spacecraft was encapsulated inside the Atlas 5 rocket’s payload fairing April 16, then mounted atop the launcher April 23.

“We did a complete review of our heat shield documentation,” Banerdt said in an interview with Spaceflight Now. “At this time, of course, the heat shield is not accessible for inspection, so we didn’t actually go back and re-inspect it, but we did go through the very extensive documentation we had from our testing.

“We double-checked all our testing to make sure that we did do a thorough test of mechanical properties, and it couldn’t have slipped by without our noticing.”

Banerdt said the news that Mars 2020’s heat shield was damaged during testing got his attention, but engineers soon determined the problem would have no impact on InSight.

“I didn’t have too much time to stew on it and build up a lot of anxiety,” Banerdt said. “There are lots of issues like this.”

Engineers are often reviewing hardware failures to ensure they do not affect other missions carrying similar components.

“You get these reports of some integrated circuit that’s failed on an existing satellite,” Banerdt offered as one example. “And you’ve got 50 of them in your spacecraft, and you have to figure out are they from the same lot? Has that been implicated? Are the uses that we have critical? Those kinds of things happen a lot.

“The longer you’re on the ground, the more of those things that any space launch has to deal with,” he said.

The heat shield review was “the last in a long line of those sorts of things,” Banerdt said.

InSight has until June 8 to blast off and reach Mars in November. The roughly five-week launch period is fixed by the positions of Earth and Mars in their orbits around the sun.

The mission was originally slated to launch in March 2016, but NASA delayed the departure after trouble encountered during assembly and testing of InSight’s seismometer instrument. Mars launch window’s come every 26 months, so the next opportunity for InSight’s liftoff opens May 5.

With the successful outcome of Monday’s flight readiness review, United Launch Alliance’s Atlas 5 team and InSight engineers planned a final countdown dress rehearsal Tuesday. Final closeouts and cleaning of the InSight spacecraft are also planned early this week to ensure the probe meets NASA’s planetary protection requirements, aimed at reducing the risk that the mission will carry microbes and other organic contamination from Earth to the Martian surface.

A launch readiness review scheduled for Thursday will assess the status of the Atlas 5 rocket, the InSight spacecraft, and ground tracking systems provided by NASA and the U.S. Air Force.

If the launch readiness review gives a green light to proceed, the Atlas 5 countdown will commence Friday evening, with retraction of the launch pad’s mobile gantry scheduled shortly before midnight, local time.

Officials are hopeful for clear skies during Saturday’s predawn launch window, and a clear view of the launch without the envelope of ground fog that often forms at Vandenberg Air Force Base, which is located on the Pacific coast northwest of Los Angeles.

“I hope we can put on a good show,” Banerdt said. “I’m hoping we have some decent conditions to actually see the launch, and not just hear it out through the fog somewhere.”

InSight is the first mission to another planet to launch from Vandenberg, which typically hosts launches of satellites into polar orbit for Earth-imaging and communications.

NASA’s previous interplanetary probes have historically launched from Cape Canaveral, using momentum provided by Earth’s rotation for a velocity boost toward the east. But InSight is light enough that the Atlas 5 rocket will have plenty of reserve capability to send the probe toward Mars without the help from Earth’s rotation.

Once it arrives on Mars in November, InSight will place its seismic instrument on the planet’s surface to listen for quakes, and a heat sensor will burrow to a depth of nearly 16 feet, or about 5 meters, to measure thermal energy coming from the Martian interior.

Scientists hope to learn more about the planet’s internal structure and composition, and use that information to refine their understanding of how rocky planets like Earth and Mars formed 4.5 billion years ago at the birth of the solar system. 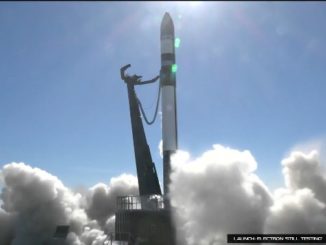 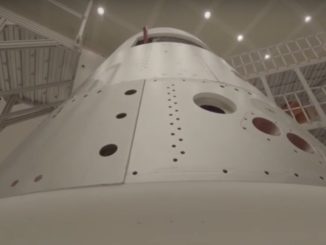 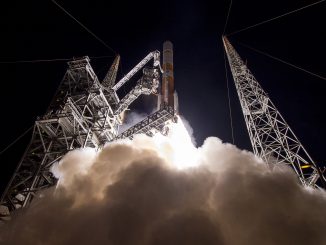