The launch of a Russian Progress cargo ship aboard a Soyuz rocket was aborted in the final minute of the countdown Sunday, forcing a delay of at least two days in the start of a resupply and refueling mission to the International Space Station.

The two-day slip will prevent the Progress MS-08 supply ship from conducting an expedited trip to the space station. The unpiloted cargo freighter was set to fly a record-fast express rendezvous profile, with docking just three-and-a-half hours after liftoff Sunday.

Assuming Russian engineers can analyze the cause of Sunday’s abort and approve plans for another launch attempt Tuesday, the Progress cargo craft will now link up with a docking port on the space station’s Zvezda service module Thursday.

The laws of orbital mechanics will prohibit the three-and-a-half hour rendezvous following a launch Tuesday. The fast-track rendezvous sequence requires the space station to fly over the Baikonur Cosmodrome in Kazakhstan moments after the Soyuz rocket lifts off, an orbital alignment that is only available on certain days.

Most Progress resupply flights and Soyuz crew missions currently make the trip in about six hours, an improvement over the two-day rendezvous sequences used early in the station program.

Officials hope to use the express approach for Soyuz crew ferry ships in the future, once demonstrated on unpiloted Progress missions. The change will reduce the workload and time spent inside the cramped Soyuz capsule for future station crews.

The Soyuz-2.1a rocket was fueled with kerosene and super-cold liquid oxygen propellants during Sunday’s countdown, and rotating gantry structures opened to reveal the booster less than one hour prior to the scheduled blastoff at 0858:45 GMT (3:58:45 a.m. EST; 2:58:45 p.m. Baikonur time)

One of two umbilical attachments between the launch pad and the Soyuz rocket disconnected as planned in the final minute of the countdown, but the second connector never budged as the automated pre-launch sequence aborted. A puff of vapor vented from the rocket’s pressurized propellant tanks as the countdown halted.

Roscosmos — the Russian space agency — said in a statement that a command to shut off the Soyuz engine ignition sequence was issued automatically, and engineers are investigating the cause of the abort.

If the launch goes ahead Tuesday, liftoff is expected around 45 minutes earlier than Sunday’s try — around 0813 GMT (3:13 a.m. EST; 2:13 p.m. Baikonur time). The precise launch time will be released by Roscosmos.

The last-minute abort was similar to a scrub of the last Russian Progress resupply launch Oct. 12. That launch occurred successfully two days after the halted countdown.

The Progress MS-08 supply ship is carrying more than 3 tons of food, fuel and supplies to the space station and its six-person crew.

Ground crews at the Baikonur Cosmodrome packed the pressurized cabin inside the Progress MS-08 supply ship with 3,064 pounds (1,390 kilograms) of equipment, scientific hardware, food and supplies for the station’s six-person crew, Roscosmos said. 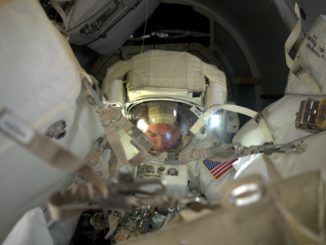 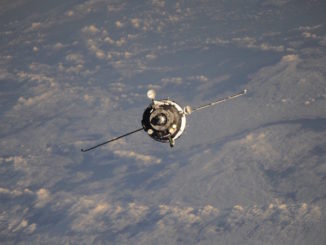 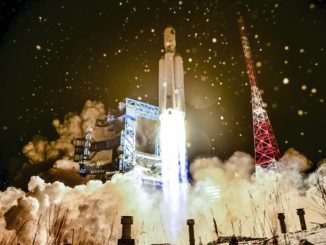