Redesigned titanium steering fins will fly aboard a Falcon 9 rocket launching Sunday from California, part of upgrades SpaceX says will ease the reuse of future boosters.

Mounted near the top of the Falcon 9’s first stage, the hydraulically-actuated fins deploy soon after the booster separates in flight to begin its descent. On Sunday’s mission, SpaceX intends to land the first stage on a drone ship dubbed “Just Read the Instructions” south of Vandenberg in the Pacific Ocean around eight minutes after liftoff.

He added that the grid fins are cast in a single piece of titanium and cut to form their shape. Four of the fins are installed on each Falcon 9 booster.

The upgrade is important, Musk said, because the titanium fins can withstand the heat of re-entry through Earth’s atmosphere without shielding. Aluminum fins on previous Falcon 9 rockets had to be replaced after each flight, and video from on-board cameras on some flights showed them on fire during re-entry.

Musk said the titanium fins are “slightly heavier” than the shielded aluminum fins, but the upgrade offers more control authority for stabilization and steering as the pencil-like 14-story booster glides back to Earth.

Depending on the profile for each mission, the first stage’s Merlin engines ignite two or three times — in groups of three or with one engine — to guide the booster toward its landing site, either on the coast near the Falcon 9’s launch pad, or on a recovery barge at sea.

The new fins “can be reused indefinitely with no touch ups,” Musk tweeted.

Asked if the heavier fins need more hydraulic fluid to move, Musk responded: “They will, but the hydraulic system is closed loop, so no fluid lost. They do need more power and energy, but rocket has plenty of that.”

The improved control authority is needed on SpaceX’s Falcon Heavy rocket, Musk said. Made of three modified Falcon 9 first stage boosters bolted together, the huge rocket is scheduled to make its first test flight later this year after four years of delays.

The Falcon 9 rocket can land in heavier winds with the upgraded fins, Musk said.

SpaceX has reused two of its previously-flown Falcon 9 rocket boosters, most recently with the launch of a Bulgarian-owned communications satellite Friday from Kennedy Space Center in Florida. Both stages needed several months of inspections, refurbishment and tests, steps that SpaceX aims to reduce on future rocket re-flights. 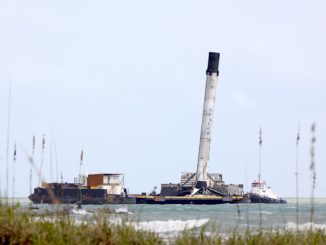 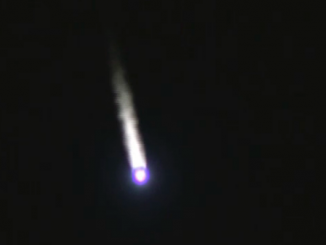 Proton rocket takes off with Express AM8 communications bird 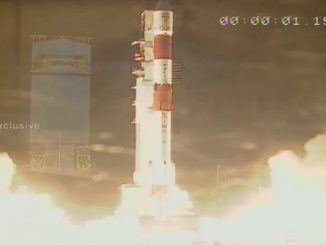