Running more than six weeks late after social unrest in French Guiana forced the closure of Europe’s launch base in the Amazon jungle, a commercial Ariane 5 rocket took off Thursday just after sunset with a pair of communications satellites manufactured in France for owners in Brazil and South Korea.

Inclement weather Thursday further delayed the start of countdown preparations, and teams had to resolve a problem with ground equipment at the Ariane 5 launch pad that pushed back liftoff more than one hour into the day’s launch window.

But the storms cleared and the managers gave the “go” to resume the Ariane 5 countdown shortly after sunset at the tropical space base.

Seven seconds later, two solid-fueled boosters mounted on each side of the core stage ignited to push the Ariane 5 into a clear evening sky.

Tracking cameras at the space center followed the Ariane 5’s ascent east over the Atlantic Ocean. As the rocket climbed into sunlight, live video showed the Ariane 5’s twin solid rocket boosters burn out and jettison, followed by release of the launcher’s Swiss-made nose fairing around three-and-a-half minutes after liftoff.

Periodic updates from the operations director inside the Jupiter control center at the launch base indicated all was well aboard the rocket as it streaked downrange, hitting the mission’s prescribed altitude, distance and velocity marks.

The launcher’s Vulcain 2 main engine switched off around nine minutes into the flight, and the core stage dropped away to fall into the Gulf of Guinea off the west coast of Africa. The upper stage’s HM7B engine, consuming the same liquid hydrogen/liquid oxygen propellant mix, ignited for a nearly 16-minute burn to propel the mission’s two payloads into orbit.

The upper stage engine firing went smoothly, and the rocket released Brazil’s Geostationary Satellite for Communications and Defense — known by the Portuguese acronym SGDC — in orbit at Plus+28 minutes, 11 seconds.

A few minutes later, after casting off a composite cover to expose the mission’s other satellite passenger, the Ariane 5 deployed the Koreasat 7 communications satellite.

“Arianespace is delighted to announce that SGDC and Koreasat 7 have been separated as planned in the targeted geostationary transfer orbit,” said Stephane Israel, chief executive and chairman of Arianespace. “For the second time this year, and the 78th time in a row, success is here for Ariane 5. Well done. Congratulations to all.”

Thales Alenia Space, which assembled the SGDC and Koreasat 7 satellites in Cannes, France, confirmed ground controllers established contact with both newly-launched craft a few minutes after separation from the Ariane 5.

The satellites were expected to fire on-board thrusters over the next five days to circularize their orbits at 22,300 miles (nearly 35,800 kilometers) over the equator, where the spacecraft will move around Earth at the same speed of the planet’s rotation, allowing the stations to remain over fixed geographic positions.

The 12,643-pound (5,735-kilogram) SGDC satellite launched on a dual-use mission for the Brazilian military and to help bridge the digital divide for far-flung Brazilian citizens. During its 18-year mission, SGDC’s 57 Ka-band and X-band transponders will be capable of delivering more than 57 gigabits per second of throughput across Brazilian territory from a perch in geostationary orbit along the equator at 75 degrees west longitude.

The SGDC project’s prime contractor is Visiona, a joint venture between Embraer, the Brazilian aerospace company, and Telebras, a telecommunications firm owned by the Brazilian government, the satellite’s end user.

“Thanks to SGDC, Telebras services will reach their final destination in cities, villages and communities that were once isolated, remote and lonely, but will now change for the better,” said Eduardo Bonini, president and CEO of Visiona. “Likewise, the Brazilian Armed Forces shall improve their operations with this new satellite, ensuring our sovereignty.”

Thales Alenia Space will start testing of the SGDC communications payload in mid-May, then hand over control of the spacecraft to control centers in Brasilia and Rio de Janeiro.

“SGDC is an important first step in the partnership between Thales Alenia Space and Brazil to develop its space program,” said Jean-Loïc Galle, president and CEO of Thales Alenia Space. “Not only are we delivering a highly-advanced satellite, but have also implemented a comprehensive technology transfer to Brazilian companies. In addition, we have integrated over 30 Brazilians into our teams across the project to foster Brazilian space expertise.”

The 8,113-pound (3,680-kilogram) Koreasat 7 satellite, owned by KTsat based in Seoul, should be ready for in-orbit tests in mid-May before entering service this summer.

Koreasat 7 carries enough on-board maneuvering fuel to function for up to 21 years, officials said. The spacecraft is heading for a geostationary slot at 116 degrees east longitude.

The spacecraft’s Ku-band and Ka-band transponders and beams will reach customers in South Korea, the Philippines, Indonesia, Indochina and India, expanding KTsat’s footprint across a wider swath of Asia than any satellite before.

“We had some difficult times and hard moments because of the delay in launching, but maybe this is why the launch success of today is all the more sweeter than I expected,” said Won-sic Hahn, KTsat’s CEO, during remarks after Thursday’s flight.

“For KTsat, we will remember this day as a kind of beginning of our company because this launch success will mark a new era and a kind of milestone for KTsat,” he said. “With Koreasat 7, our service coverage area will expand from not only in the Korean Peninsula, but also everywhere in Asia, so we will take a big step toward being a more global satellite operator.”

The Ariane 5 was grounded for 44 days since its original March 21 launch date as a general strike suspended business at the spaceport. Protesters erected barricades on the roads leading to the Guiana Space Center, which is operated by CNES — the French space agency — as they sought emergency aid from the French government to address rising crime and education, health care and infrastructure concerns.

Situated between Brazil and Suriname on the northeastern coast of South America, French Guiana is a full-fledged part of France, with political rights equal to French departments in Europe.

The French government signed an accord with civic leaders and activists in French Guiana on April 21, promising a new multibillion-dollar investment in the department, including the hiring of new police officers, road repairs and expansions, school upgrades and the abandonment of a plan to privatize a hospital in Kourou, the town closest to the space center.

The Ariane 5 remained secured inside the final assembly building at the spaceport while operations were suspended. A detachment of the French Foreign Legion is in charge of security of the space base.

Despite the delay, Arianespace officials still expect to launch 12 flights this year, the company’s original target announced in January. No launches were scheduled from late April through late June, a period that will allow Arianespace to catch up on its manifest.

The next launch from the Guiana Space Center is scheduled for 1154 GMT (7:54 a.m. EDT; 8:54 a.m. French Guiana time) on May 18, when a Russian-built Soyuz rocket will lift off with the SES 15 communications satellite. The Boeing-made satellite, owned by SES of Luxembourg, will link air travelers and serve maritime markets across North America, Latin America and the Caribbean.

Another Ariane 5 flight is set for June 1 with the ViaSat 2 and Eutelsat 172B communications satellites. 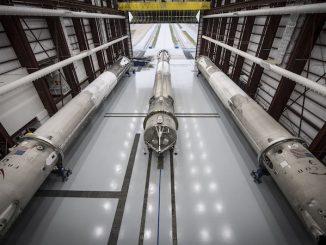 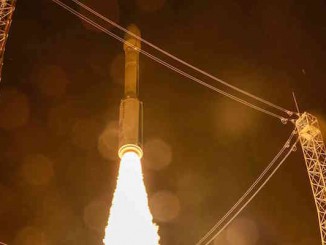 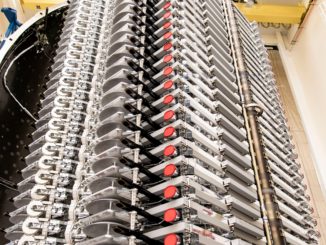