Europe’s Galileo navigation program turned to the workhorse Ariane 5 rocket for a heavy lift Thursday, delivering four new satellites to orbit on the launcher’s 75th successful flight in a row and pushing the growing fleet closer to global coverage.

The four satellites, built in Germany with navigation payloads from Britain, arrived in an orbit about 14,200 miles (22,900 kilometers) above Earth around three-and-a-half hours after blastoff from French Guiana atop an Ariane 5 rocket.

The Galileo network will have 18 satellites once the new additions enter service next year after several months of tests and verifications, but the 14 craft already in space should be enough for the European Commission to offer initial navigation services by the end of the year, officials said after Thursday’s launch.

The mid-morning blastoff from French Guiana was the first time a heavy-lift Ariane 5 flew with Galileo satellites. Seven previous launches carried two Galileo spacecraft at a time aboard Russian Soyuz rockets, and the extra power of the Ariane 5 allows it to haul four in one mission.

The rocket quickly pitched on a northeasterly trajectory, lining up with the ground track of the rest of the Galileo satellites, and powered through puffy cumulus clouds hanging over the tropical launch base.

The Ariane 5 dropped its solid-fueled boosters and payload fairing into the Atlantic, and its hydrogen-burning Vulcain 2 engine finished its job around nine minutes into the flight, followed by stage separation a few seconds later.

A hydrazine-fueled Aestus engine ignited for the first of two burns, first to loft the four Galileo satellites into an elliptical transfer orbit stretching up to 14,000 miles above Earth, then to circularize the orbit at that altitude.

The burns were separated by a coast phase lasting more than three hours, the first such long-duration flight in the Ariane 5’s 89 flights to date.

“Ariane 5 is, of course, Europe’s sovereign launcher, and Galileo is set to offer European citizens an independent positioning capability, and the fact that four satellites are being launched by Ariane is a superb showcase for Europe,” said Jean-Yves Le Gall, president of CNES, the French space agency.

After an on-target final burn, the upper stage released the Galileo satellites in two pairs almost four hours after liftoff, and officials confirmed all four spacecraft were healthy after establishing contact through ground stations.

“Arianespace is delighted to confirm that the four Galileo satellites have been safely separated on their targeted medium Earth orbits,” said Stephane Israel, chairman and CEO of Arianespace, the Ariane 5’s commercial operator.

Officials said all four satellites had extended their power-generating solar panels as expected.

The launcher targeted release of the Galileo spacecraft in a circular orbit about 14,200 miles (22,900 kilometers) at an inclination of 54.57 degrees. Tracking data indicated the satellites were placed in an orbit very close to predictions.

“Antonianna, Lisa, Kimberley and Tijmen are the 15th to 18th Galileo spacecraft to be orbited by Arianespace,” Israel said in post-launch remarks, referring to nicknames for the satellites to honor the winners of a European children’s drawing contest. “They will soon join their teammates in the constellation to provide Galileo initial services by the end of the year.”

With Thursday’s launch, the Galileo system has six new satellites added this year. Two Galileo platforms launched from French Guiana in May aboard a Soyuz rocket.

Owned and operated by the European Commission, the EU’s executive body, the multibillion-dollar Galileo network should provide uninterrupted global coverage as soon as 2018, with a full complement of six spare satellites to be launched by 2020.

“Galileo is, of course, a flagship program for the European Commission as well as for us at the European Space Agency,” said Jan Woerner, director general of ESA, which provides technical assistance and management for the Galileo program. “Galileo is an instrument which brings satellite navigation to Europe, but also to the world.”

Officials tout the Galileo system as the world’s only civilian-operated satellite global positioning service, and it will both offer Europe an independent source of navigation and work in concert with satellite navigation fleets owned by the U.S. military, Russia and China.

Western users with phones and handsets equipped to receive location and timing information from the U.S. Global Positioning System and European Galileo satellites will receive more precise position fixes, especially in rugged terrain and in dense urban areas where skyscrapers can block some satellite signals.

The spacecraft launched Thursday were built by OHB in Bremen, Germany, and carry L-band navigation instruments supplied by SSTL of Guildford, England.

OHB and SSTL are teaming up on 22 of the Galileo satellites, and 14 of those craft have been shot into orbit with the conclusion of Thursday’s mission.

Another eight Galileo satellites are in production or testing for launches on two more Ariane 5 rockets in August 2017 and in March 2018, officials said.

There are also four Galileo satellites launched in 2011 and 2012 for in-orbit validation purposes, and those spacecraft are now part of the operational fleet, bringing the total number of Galileo platforms to 18.

“I want to declare Galileo initial services operational as soon as possible,” said Elzbieta Bienkowska, European commissioner for the internal market, industry, entrepreneurship and SMEs, a portfolio that includes responsibility for space policy. “We are working hard on this.

“Cooperation by all European space players is really a determining success factor,” Bienkowska said. “Space is a very positive and very concrete example of what we can do together in Europe because no single European country can do it on its own.”

Thursday’s mission gave the Ariane 5 program its 75th straight success, a record dating back to 2003. The number bests the consecutive success record achieved by the precursor Ariane 4 rocket, which logged 74 flawless flights in a row from 1995 through the launcher’s retirement in 2003.

The next Ariane 5 launch is scheduled for Dec. 20, when it will send up the Star One D1 and JCSAT 15 communications satellites for commercial companies in Brazil and Japan. 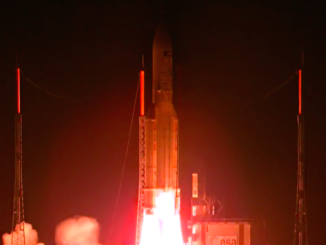 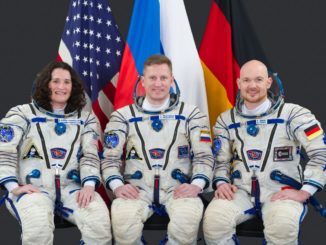