India’s Polar Satellite Launch Vehicle blasted off Thursday with the seventh and final spacecraft for a regional navigation network to provide position data to users across the subcontinent independent of foreign satellite systems.

The seventh member on the Indian Regional Navigation Satellite System — IRNSS 1G — completes the deployment of an indigenous network of satellites thousands of miles above Earth to broadcast information about the location of users across India and neighboring territories.

Indian Prime Minister Narendra Modi watched the launch via a live video broadcast and spoke in public remarks after the mission’s successful conclusion, in which he congratulated space officials and renamed the IRNSS constellation Navic.

Modi also emphasized the independence of the $210 million Indian navigation system, calling it a “made in India” project.

The final satellite in the IRNSS, or Navic, fleet will be operational in a few weeks.

With this successful launch, we will determine our own paths powered by our technology. This is a great gift to people from scientists: PM

“We are on the threshold of completing a navigation satellite constellation, which is going to provide India and its surroundings an independent geo-positioniong system,” said A.S. Kiran Kumar, chairman of the Indian Space Research Organization. “This is a unique system, which has been (developed) with the intention of providing to the country an independent navigation service with a combination of a minimum number of satellites.”

India’s navigation satellites are targeted at the country’s home territory.

“Unlike other global positioning services, which have been provided by the United States, Russia, the European Union and China, we have gone for a regional navigation satellite service, which requires only a seven-satellite constellation,” Kiran Kumar said.

The 44-meter (145-foot) PSLV, augmented by six powerful solid rocket boosters each loaded with 12 metric tons of pre-packed propellant, flew east from the launch base on Sriharikota Island, a beachfront land mass about 80 kilometers (50 miles) north of the Indian city of Chennai.

The launcher made its 35th flight — and the 13th mission in its most powerful PSLV XL configuration — since India’s workhorse rocket debuted in 1993. Thursday’s launch marked the third PSLV flight of the year, as India executes launches at a record pace.

After firing away from India’s spaceport and turning east over the Bay of Bengal, the PSLV shed four of its boosters 70 seconds after liftoff, followed by the release of the last pair at T+plus 92 seconds.

The separation of the boosters was visible in live video from ground-based tracking cameras as the PSLV soared through a clear midday sky.

An engineer in the launch control center at Sriharikota called out milestones throughout the 20-minute mission.

The rocket’s solid-fueled first stage fell away away T+plus 1 minute, 50 seconds, when the PSLV’s liquid-fueled Vikas second stage engine ignited for a burn of more than two-and-a-half minutes.

Another solid rocket motor lit at T+plus 4 minutes, 23 seconds, at an altitude of 132 kilometers (82 miles), then a twin-engine hydrazine-burning fourth stage injected the IRNSS 1G spacecraft into an elliptical “sub-geosynchronous transfer orbit.”

The mission aimed for an orbit with an apogee, or high point, nearly 20,700 kilometers (nearly 13,000 miles) above Earth at an inclination of 17.86 degrees, according to ISRO.

Officials verified separation of the IRNSS 1G satellite from the PSLV about 20 minutes after liftoff. Engineers at ISRO’s satellite ground station in Hassan, India, were to take control of the spacecraft soon after the rocket’s fourth stage released it in orbit.

The mission director for Thursday’s launch — dubbed PSLV-C33 by ISRO — declared the mission fully accomplished moments after IRNSS 1G’s separation from the rocket.

Solar panels on the 1,425-kilogram (3,141-pound) IRNSS 1G spacecraft were programmed extend shortly after separation from the rocket to begin generating electricity for the satellite.

A rocket thruster on the satellite will boost it into a circular geosynchronous orbit at an altitude of more than 35,700 kilometers (about 22,300 miles), where it will join India’s six other navigation satellites launched aboard PSLV missions since July 2013.

The seven-satellite navigation constellation will provide positioning services over a primary coverage area encompassing India and extending up to 1,500 kilometers (900 miles) from its borders. Partial coverage will be available across much of Asia, stretching from the Middle East to Japan, and from Mongolia to Australia.

“With the operationalization of six spacecraft, proof-of-concept of an independent regional navigation satellite system over India has been demonstrated for the targeted position accuracy which is much better than 20 meters (66 feet) over 24 hours of the day,” ISRO officials wrote in an information kit for Thursday’s launch.

“With the launch and operationalization of IRNSS 1G, the sixth in the constellation, the completion of the (the) IRNSS constellation will be achieved,” the ISRO press kit said.

Once it is operational, IRNSS 1G will be the third satellite to enter an equator-hugging geostationary-type orbit at an inclination of 5 degrees. Four other navigation satellites are in geosynchronous-type orbits inclined 29 degrees to the equator.

“With this (system), we are able to provide for India and the surrounding 1,500 kilometers a capability to locate yourself using a set of ground receivers, which are also being designed and developed in the country,” Kiran Kumar said. “We are also developing the chip sets required for (helping) the entrepreneurs come out with their own solutions for positioning capability.”

Each IRNSS satellite designed for a 12-year lifetime and carries L-band and S-band navigation signal transmitters. A C-band transponder aboard each spacecraft helps generate location estimates for the satellites, and a rubidium atomic clock keeps time aboard each platform.

Retro-reflectors aboard the IRNSS spacecraft are also available for laser ranging, according to ISRO.

“It’s a made in India payload, and its concept, its coding, its software, everything is built in India,” said Tapan Misra, director of ISRO’s Space Applications Center.

India’s next PSLV flight is scheduled for June with the Cartosat 2C Earth observation satellite and secondary payloads from the United States, Canada, Germany, Indonesia, Italy and Latvia. 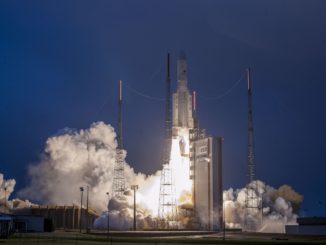 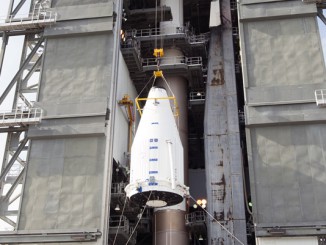 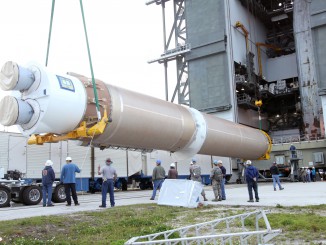