More than five years after a final shuttle servicing mission — and a quarter of a century since its launch in April 1990 — the Hubble Space Telescope is operating in near flawless fashion, and engineers are optimistic the observatory will remain on the forefront of astronomy at least through 2020 — its 30th anniversary — if not beyond.

How long Hubble might actually last “is the biggest question we keep getting from people, because everybody is used to something on Hubble breaking every five years,” said Jason Kalirai, a researcher at the Space Telescope Science Institute at Johns Hopkins University in Baltimore. “That’s its history, and it’s been five years since its last servicing mission now. I think people are a little bit nervous.”

But he said engineers at NASA’s Goddard Space Flight Center in Greenbelt, Maryland, are doing “a wonderful job” managing the telescope systems to minimize stress and so far, the observatory remains in excellent health

“Also, at a very basic level, there’s a lot of redundancy built into Hubble, too,” he said. “Right now, we have two ultraviolet spectrographs, we have two visible light cameras. They have slightly different capabilities, but even if you only had half of the instruments on Hubble or something, it would still be, by far, the most powerful telescope that we have in the world.”

While instrument failures or the eventual loss of stabilizing gyroscopes, fine guidance sensors or other critical systems will one day force NASA managers to decide whether the cost of continued operations is justified by whatever science might still be possible, engineering projections show that day likely remains a long way off.

The telescope’s two newest instruments, the Wide Field Camera 3 and the Cosmic Origins Spectrograph — installed during the final shuttle visit in 2009 — have a better than 98 percent chance of remaining functional through 2020, according to a statistical analysis carried out last year by the NASA Engineering and Safety Center.

Two other instruments that were repaired by spacewalking astronauts during the last shuttle visit no longer have internal redundancy and any significant component failures could knock them out of action. Even so, both are operating normally and the analysis shows the Advanced Camera for Surveys and the Space Telescope Imaging Spectrograph both have a better than 85 percent chance of making it another five years.

Other critical systems, including the telescope’s solar arrays, solar array drive electronics, radio transmitters, gyros and reaction wheel assemblies, used to move the telescope to aim at astronomical targets, all have a better than 95 percent shot at making it past 2020.

The observatory’s fine guidance sensors, which keep it locked onto its targets with mind boggling precision, and the payload computer used to control the science instruments, have a better than 80 percent chance.

“We continue to work on guessing what could go wrong, what we could do to compensate for that if it does, but that’s really what we’re working on right now, to try to make sure as these things happen that we can handle them,” said James Jeletic, deputy project manager of Hubble operations at the Goddard Space Flight Center.

“But there’s nothing giving us any signs of anything right now. I mean, we’re sitting almost fat, dumb and happy about it all, (saying) are we really this lucky? But we’re knocking on wood, hoping it continues for as long as possible.”

The Hubble Space Telescope was launched aboard the shuttle Discovery on April 24, 1990. It was equipped with five science instruments: the Wide Field/Planetary Camera 1, the European Space Agency’s Faint Object Camera, the Goddard High Resolution Spectrograph, a Faint Object Spectrograph and a High Speed Photometer.

During a shuttle servicing flight in December 1993, spacewalking astronauts installed a replacement Wide Field/Planetary Camera with built-in corrective optics to counteract the blurring caused by Hubble’s famously-flawed 94.5-inch primary mirror. They also replaced the High Speed Photometer with a device known as COSTAR that used another set of corrective mirrors to route focused starlight to Hubble’s other instruments.

During the fifth and final shuttle visit in 2009, astronauts replaced the Wide Field/Planetary Camera 2 with the Wide Field Camera 3 and installed the Cosmic Origins Spectrograph in place of the no-longer-needed COSTAR. The also repaired the Advanced Camera for Surveys and the Space Telescope Imaging Spectrograph.

The astronauts replaced all six of the telescope’s nickel-hydrogen batteries, installed a refurbished fine guidance sensor, installed new insulation blankets, attached a grapple fixture to the base of the observatory and replaced a science instrument control computer.

Jeletic said all of Hubble’s science instruments are operating normally, with no signs of any trouble, including the repaired ACS and STIS. While both are operating in “single string” mode without any internal redundancy, both are “still healthy, still being used like crazy,” Jeletic said. “Again, we’ve run longer on ACS repaired than we did on ACS originally.”

Gyroscopes have long been a concern with Hubble. It is equipped with six but only uses three for normal operations; the others are held in reserve, powered down but ready to be activated on a moment’s notice.

One of Hubble’s six gyros failed last year, presumably because a hair-thin flex wire carrying power to the device broke or separated after more than 50,000 hours of operation — a near record. That gyro, and two others, use an older style flex wire design while the other three were built with silver-coated “enhanced” flex wires to improve durability.

Of the five remaining gyros aboard Hubble, one had to be powered down because of electronic “noise” in its circuitry. But engineers developed software to compensate and while the gyro remains powered down, it is considered fully operational and ready for use when needed.

Because of earlier gyro problems, engineers developed complex software “control laws” to enable Hubble to carry out high-priority observations using two gyros or even one.

Depending on what might fail down the road, mission managers will have the option of downshifting to a reduced set of gyros to maximize the lifetime of the remaining units.

“We want to optimize that situation and get as much science back as we can while all the instruments are truly working,” Jeletic said in an earlier interview. “So we’re going to stay in three-gyro mode. If that changes, if all the sudden we’ve lost two instruments or something, we may take another look at that. Or, if we end up losing gyros over time and we’re down to two gyros, then we will automatically jump to the one-gyro mode and put one in reserve. That’s the game plan.”

But for now, Hubble has five healthy gyros, its batteries are in excellent shape and its fine guidance sensors, needed to keep the telescope locked onto its targets, are hanging in despite some minor degradation in one.

“We just use that one less than we use the others so that it lasts longer,” Jeletic said.

Because of a phenomenon known as “desorption,” in which atoms and molecules making up a spacecraft’s components can slowly migrate to the surrounding environment over time, the structure holding Hubble’s primary and secondary mirrors is ever so slightly shrinking, requiring periodic tweaks of the secondary mirror’s position to keep the telescope in focus. The most recent adjustment came in early February.

“We can still take images, but we try to keep them as focused as possible, so we do a very small move (of the secondary),” Jeletic said. “We do this (about) once a year. Nothing unusual about it. We actually moved the mirror less than two microns. Very, very small movements.”

Hubble is equipped with two primary computers, one that controls basic telescope functions and another, called a payload computer, that routes commands to the science instruments and formats their data for transmission to Earth. The payload computer crashes, or freezes up, about once every year or so, but Jeletic said its easily rebooted.

“As far as the lifetime is concerned, I believe we will make it past 2020, and that’s about as good as I can get because really, we could have great gyros and they could last five years, six years, seven years each, or we could all the sudden take a hit on gyros and now they’re only lasting two or three years each,” Jeletic said. “There’s just no way to predict that.

“I think the instruments, we have enough redundancy up there that we’ll as least have one good instrument of some sort out in that timeframe, if not two. Then you’re just talking about how many other things after 30 years in orbit are breaking. It’s impossible to tell. Trends look good, but it’s just like anything you own. Your stereo can last you forever but then all the sudden, it goes. What just happened? Who knows? Some part just finally wore out.”

No matter how it plays out, NASA managers will be continually assessing the balance between Hubble’s science return and the approximately $90 million a year it takes to operate the observatory. Senior management has indicated the agency will continue funding “as long as we’re doing good science,” Jeletic said.

“We may not get as much budget as we want, and we may have to try to figure out how to handle that scenario, but the bottom line is they are fully supportive, they recognize they have a scientific instrument up there that’s phenomenal,” he said. “So as long as it does good science, we’ll use it.”

But with the shuttle now retired, with no chance of another servicing flight and with other missions putting pressure on NASA’s budget, Hubble eventually will fall silent, either because of a catastrophic failure or the inevitable malfunctions that will make funding harder and harder to justify.

But Hubble fans should have many more years beyond that to enjoy watching the space telescope fly overhead.

NASA engineers initially projected that atmospheric drag — friction with the extreme upper atmosphere — would lower Hubble’s altitude and lead to a fiery re-entry and breakup by the end of the 2020s.

Because Hubble is massive enough that at least some components will survive to hit the ground, the last visiting shuttle crew installed a grapple fixture to enable a robotic space tug to lock on and drive the observatory into the atmosphere for a targeted entry, ensuring debris does not fall over a populated area.

But the amount of drag experienced by the telescope depends on the effects of the 11-year solar cycle on Earth’s atmosphere. Thanks to less solar activity that usual during the current cycle, the latest projections show Hubble likely will stay aloft until late 2038. 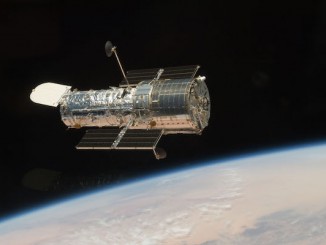 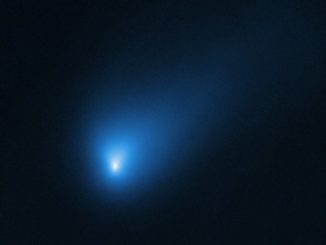 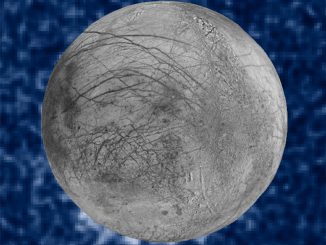