Scientists using the Hubble Space Telescope have found the best evidence yet of a salty ocean of liquid water lurking beneath the surface of Jupiter’s largest moon Ganymede, ripening the icy world’s allure as mission planners design probes for more detailed exploration.

Long thought to possess an underground ocean, Ganymede is the largest moon in the solar system and measures bigger than Mercury.

Researchers studied the oscillation of auroral belts near Ganymede’s north and south poles with Hubble to conclude a substantial reservoir of liquid water must exist beneath the moon’s icy crust.

“Our new HST observations provide the best evidence to date for the existence of an ocean on Ganymede,” said Joachim Saur, professor of geophysics at the University of Cologne in Germany.

Ganymede is the only only moon in the solar system with its own magnetic field, triggering belts of polar aurorae similar to the northern and southern lights on Earth.

“If someone could be standing on Ganymede looking up into the night sky, it would appear as red aurora to you, and it would be visible even with the naked eye,” Saur said Thursday in a teleconference with reporters.

The magnetic field of Ganymede also interacts with Jupiter’s powerful magnetism, causing the belts to shift in latitude. Saur’s science team won prized observing time with Hubble to measure how much the auroral belts oscillate over time.

“This is a really great example of using a remote sensing technique — using a telescope in orbit around the Earth — to study a moon that’s in orbit around Jupiter and yet be able to make inferences about the interior of that moon just by looking at it from the outside,” said Heidi Hammel, executive vice president of the Association of Universities for Research in Astronomy. “We aren’t at Jupiter. Hubble is at the Earth, and yet it can probe the internal structure of this moon remotely. That’s a really powerful tool.”

It turns out the volume of water persisting beneath Ganymede’s surface has an influence on the aurorae, counteracting the tug from Jupiter that would cause the belts to “rock” up to 6 degrees back and forth every 10 hours.

“However, when there is a salty, and thus electrically-conducting ocean present, this ocean counterbalances Jupiter’s magnetic field influence and reduces the rocking of the aurora to only 2 degrees,” Saur said.

“We used HST (and) looked at Ganymede for more than five hours, and monitored the aurorae and saw that the aurorae barely moved during that five hours — only rocking by 2 degrees — exactly like (we) predicted when there is an ocean present,” Saur said. “This confirms the existence of an ocean and simultaneously it rules out the absence of an ocean.”

Scientists believe Ganymede’s buried ocean has more water than all the water on Earth’s surface, perhaps measuring as much as 60 miles thick underneath a 95-mile crust of mostly ice, according to a NASA press release.

“This discovery marks a significant milestone, highlighting what only Hubble can accomplish,” said John Grunsfeld, associate administrator of NASA’s science mission directorate. “In its 25 years in orbit, Hubble has made many scientific discoveries in our own solar system. A deep ocean under the icy crust of Ganymede opens up further exciting possibilities for life beyond Earth.”

According to Saur, the team based in Cologne used Hubble on two occasions in 2010 and 2011 to monitor the movement of aurorae in ultraviolet light, simultaneously observing Ganymede’s northern and southern belts.

“We have four independent measurements, and all four measurements show that the aurorae in all these cases moved by 2 degrees only, and this gives us confidence in the measurement,” Saur said.

NASA will celebrate the 25th anniversary of Hubble’s launch in April, and officials are confident the storied observatory will continue operating into the 2020s after repairs by astronauts on a series of space shuttle missions, most recently in 2009.

“Hubble is the only observatory right now that can do these kind of observations in ultraviolet light, and be able to precisely resolve and disinctly detect these features on Ganymede,” said Jennifer Wiseman, NASA Hubble senior project scientist.

NASA’s Galileo spacecraft orbited Jupiter from 1995 to 2003, flying by the giant planet’s moons to snap photos, study their geology and measure their composition. Galileo conducted six flybys of Ganymede, finding evidence that part of the moon’s surface had been flooded from water eruptions through ice volcanoes.

“Based on the geology, we believe there was a time when the ocean may have communicated with the surface in the distant past,” said Jim Green, director of NASA’s planetary science division.

“Since the 1970s, there was speculation and models that Ganymede could possess an ocean,” Saur said. “However, there was only one (piece of) observational evidence, and that comes from the Galileo orbiter. Galileo had six close flybys of Ganymede, but these flybys lasted only 20 minutes each. That’s too short to resolve the effects of the ocean without ambiguity … The new trick with the Hubble observation is that we have seven hours of data, and then we do not have this ambiguity any more.”

The European Space Agency plans to launch a probe to Jupiter in June 2022 for the most in-depth study of Ganymede yet.

Arriving at the gas giant in January 2030, the Jupiter Icy Moons Explorer will zip past Jupiter’s moons Europa and Callisto, each believed to contain subterranean oceans, multiple times before settling into orbit around Ganymede for nearly 10 months.

NASA is working on a separate mission for launch in the 2020s to focus on Europa, and the space agencies could partner to build instruments and secondary payloads to accompany each spacecraft on the journey.

ESA’s JUICE mission and NASA’s Europa flyby probe — successors to the Galileo orbiter — could be flying through the Jupiter system at the same time in the 2030s.

“When the JUICE mission ultimately goes into orbit around Ganymede, it will have a very, very rich and exciting science mission,” Hammel said. 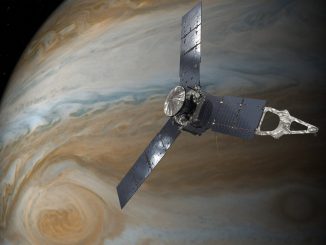 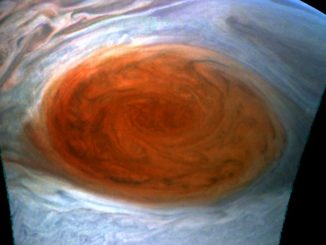 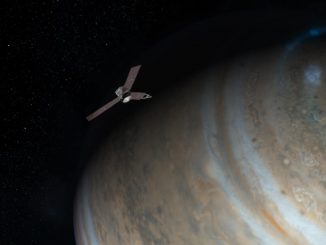