SpaceX says it is giving up on landing the Falcon 9 rocket’s first stage on a barge in the Atlantic Ocean after Wednesday’s launch of a NOAA space weather observatory due to rough seas in the booster recovery zone off Florida’s East Coast.

“The drone ship was designed to operate in all but the most extreme weather,” the company said in a statement. “We are experiencing just such weather in the Atlantic with waves reaching up to three stories in height crashing over the decks. Also, only three of the drone ship’s four engines are functioning, making station-keeping in the face of such wave action extremely difficult.”

The launch was still on track for liftoff at 6:03 p.m. EST (2303 GMT) with NOAA’s Deep Space Climate Observatory. The mission’s two previous launch attempts ended in scrubs due to technical issues and unfavorable upper level winds.

“The rocket will still attempt a soft landing in the water through the storm (producing valuable landing data), but survival is highly unlikely,” SpaceX said.

The decision means the next chance to attempt a full flyback experiment — a challenging maneuver aimed at eventually making SpaceX’s rocket reusable — will likely not come until April, when a Falcon 9 rocket is scheduled to send up a package of supplies to the International Space Station.

SpaceX has a busy slate of launches this year, with a manifest over the next few months stacked with satellites completed and awaiting liftoff. NASA is also pushing SpaceX to launch cargo missions to the space station as soon as possible to ensure the lab’s crew has a steady flow of supplies and research experiments.

SpaceX’s next launch is scheduled at the end of February or in early March with a pair of Boeing-built communications satellites for Eutelsat and Asia Broadcast Satellite. The launch will target a distant orbit stretching thousands of miles above Earth, and the combined weight of the satellites — nearly 8,000 pounds — will require the Falcon 9 booster’s full propellant load.

Hans Koenigsmann, SpaceX’s vice president of mission assurance, said Saturday the launch for Eutelsat and ABS will not carry landing legs, meaning it will not attempt a landing on SpaceX’s autonomous spaceport drone ship, the name given to a planned fleet of football field-sized SpaceX landing barges.

The rocket may still reignite its engines to collect data on the rocket’s re-entry characteristics.

SpaceX’s next resupply mission to the space station is due for liftoff April 8. Its launch profile will be identical to the Jan. 10 launch in which the Falcon 9 booster first attempted a shipboard landing, ending with a crash after the rocket ran out of hydraulic fluid to move its aerodynamic grid fins.

SpaceX plans to move its booster recovery operations to landing pads on the coast when the larger Falcon Heavy rocket begins flying. Its first launch is scheduled for no earlier than the third quarter of 2015 from launch pad 39A at the Kennedy Space Center in Florida.

Air Force and Federal Aviation Administration safety regulators must approve the land touchdowns once SpaceX wrings out the process at sea. 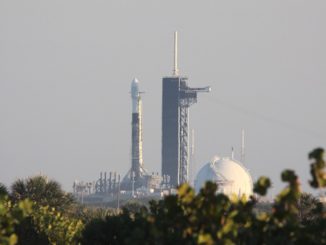 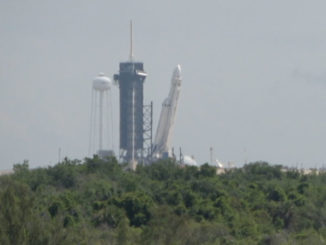 Watch the Falcon Heavy go upright at launch pad 39A 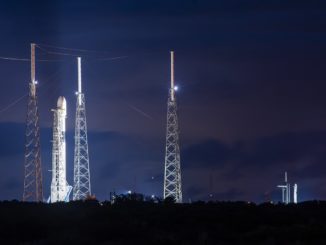