CAPE CANAVERAL — A record number of Atlas 5 launches, the return of Delta 2 and a Delta 4-Heavy at the dawn of a new space exploration era highlighted 2014 for United Launch Alliance.

The company performed 14 missions this year from Cape Canaveral in Florida and Vandenberg Air Force Base in California using nine Atlas rockets, four Delta 4 vehicles and one Delta 2. ULA’s customer lineup for the year included a half-dozen launches for the U.S. Air Force, three for the National Reconnaissance Office, three commercial flights, and two for NASA.

The year featured four Global Positioning System satellite launches, the most conducted in a given calendar year since 1993.

Take a look back at 2014 with the help of ULA’s post-launch highlights films for each mission:

The Tracking and Data Relay satellite-L was successfully delivered into orbit to reinforce NASA’s space-based tracking and communications network. Advancing from the days of ground stations providing sporadic coverage of man’s early exploits in space to the creation of an orbiting satellite network for constant communications, the next bird in the third generation of NASA’s tracking stations in the sky roared off the launch pad on Jan. 23.

Igniting a surge of three Global Positioning System satellite launches in the next five months, a Delta 4 rocket blazed a trail of fire and light into the Florida sky Feb. 20. The new bird — known as GPS 2F-5 — will become a primary broadcasting satellite in the constellation.

A new global weather observatory for the U.S. armed forces was lofted into orbit aboard its Atlas 5 booster rocket from California on April 3 to provide tactical forecasts to military operations. The $518 million spacecraft will help guide some of the most important decisions in the armed forces, from flight patterns to troop movements.

Setting sail at mid-day on a marathon trip to orbit, an Atlas 5 rocket launched a classified spacecraft for the National Reconnaissance Office on April 10. The clandestine launch appeared to deploy an intelligence-gathering spacecraft directly into geosynchronous orbit.

Completing a pair of missions in one week’s time, a feat also performed last month, United Launch Alliance sent an Atlas 5 rocket soaring May 22. This classified mission for the National Reconnaissance Office appeared to launch a data-relay satellite into geosynchronous transfer orbit.

Streaking back into action after a two-and-a-half-year hiatus, a Delta 2 rocket launched NASA’s Orbiting Carbon Observatory No. 2 to watch the Earth breathe from space. It is the agency’s first spacecraft dedicated to measuring carbon dioxide in Earth’s atmosphere, a critical new data-gathering project for scientists and policy-makers,

A pair of covertly developed inspector satellites to monitor collision threats and nefarious activities in geosynchronous orbit for U.S. Strategic Command blasted off aboard a Delta 4 rocket. The Geosynchronous Space Situational Awareness Program, or GSSAP, launched from Cape Canaveral en route to operational orbits 22,300 miles above Earth. The GSSAP project will provide surveillance on man-made objects and threats in orbit.

A rocket launch to serve the world blasted off from Florida carrying a new Global Positioning System satellite to transmit omnipresent navigation and timing information to users across the planet.

The world’s most capable commercial Earth-imaging satellite was launched into space atop an Atlas rocket from Vandenberg Air Force Base in California. Designed to see objects as small as 1-foot-wide (31 cm) from 383 miles in space, the WorldView 3 spacecraft will be the latest in a series of commercial eyes in the sky operated by DigitalGlobe of Longmont, Colorado.

A clandestine commercial satellite for the U.S. government rocketed into orbit aboard an Atlas 5 booster from Cape Canaveral. Dubbed CLIO, the spacecraft was built by Lockheed Martin for an undisclosed government user. Its orbital position and the exact mission are secret. The liftoff marked the 15th time in a row an Atlas has been fueled and launched on a single attempt.

Launching for the 50th time, an Atlas 5 rocket flew a milestone mission Oct. 29 in deploying a Global Positioning System satellite for the worldwide utility. The GPS 2F-8 satellite will join the orbiting navigation network as the 31st functioning spacecraft — including four launched in 2014 — and 8 backups. It has not been since 1993 that the Air Force launched four or more GPS birds in a single calendar year.

NASA’s inaugural Orion spaceship has set sail on a two-orbit, four-hour shakedown cruise around the Earth, leaving port atop a United Launch Alliance Delta 4-Heavy rocket and its incandescent power at 7:05 a.m. EST Dec. 5. The 46,000-pound craft rocketed into its preliminary orbit, then received another upper stage engine boost that put Orion on a trajectory to travel 15 times higher than the International Space Station before re-entering over the Pacific Ocean and splashing down 600 miles southwest of San Diego.

A United Launch Alliance Atlas 5 rocket put on a display of power, sound and light Dec. 12 at Vandenberg Air Force Base in launching a clandestine national security payload, then successfully debuted a new upper stage engine as it flew over the horizon. It was the most poweful Atlas 5 to ever fly from Vandenberg and featured the new RL10C-1 powerplant on the Centaur. 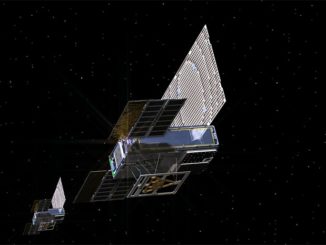 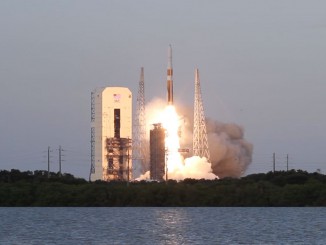 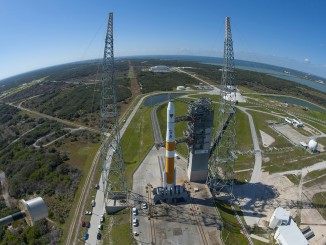