Scientists analyzing imagery from NASA’s Curiosity Mars rover believe sediments left by an ancient lake more than three billion years ago formed a towering mountain that is set to be the robot’s research subject for the rest of its mission on the red planet.

The evidence indicates Mars may have once been sufficiently warm and wet to support lakes lasting up to tens of millions of years — and maybe longer — enough time for basic life forms to take hold.

Curiosity is exploring a 96-mile-wide impact basin named Gale Crater, where the rover touched down in August 2012. Scientists cited a three-mile-high peak named Mount Sharp in the center of the crater as the reason for landing the rover at Gale Crater after observations from Mars orbiters showed the mountain harbored clay minerals that likely formed in the presence of water.

The rover already found proof that ancient rivers once coursed through the crater, supporting an environment that was — at least intermittently — habitable to microbial life.

Using images of inclined rock formations at the base of Mount Sharp, scientists have surmised a lake — or a series of lakes — at least a few meters deep once filled the crater.

Runoff from melting snow at the rim of the crater could have formed seasonal streams feeding into the lake system. Evidence of sedimentary deposits from small river deltas support this hypothesis, scientists said.

“The puzzle pieces are coming together, and we are now able to answer two big questions about Gale Crater,” said Michael Meyer, NASA’s lead Mars scientist. “How did Mount Sharp form, and how long was there water to support microbial life?”

The rivers may have taken tens of millions of years to lay down the sediment that eventually formed Mount Sharp, giving scientists an idea of how long the region was habitable.

“Looking at the size of the lake in Gale Crater, and the length of the time … that water was showing up, that implies that there may have been sufficient time for life to get going and thrive,” Meyer said.

One question still unanswered is how long it takes for organic building blocks to come together and create basic microorganisms.

“These are things that we don’t have a very good handle on here on Earth, much less the possibilities on another planet,” Meyer said.

“The landscapes of Mount Sharp indicate that rivers, lakes and ground water were present over millions of years, something that would be impossible on Mars today,” Vasavada said.

“This is a critical point,” Vasavada said. “To sustain a lake at Gale Crater for millions of years, Mars would need a vigorous hydrological cycle to keep the atmosphere humid.”

A large ocean would keep the planet’s atmosphere humid enough to keep the crater filled with water, according to Vasavada. He said Mars could also been warmed enough to melt its frozen ice caps through a series of volcanic eruptions, asteroid impacts, or other disconnected events.

“As we continue studying Mount Sharp, one question we’ll ask is whether temporary climate fluctuations could form what we see geologically, or whether a long-lived warm climate was truly necessary,” Vasavada said.

“I think at this point the jury is out,” Vasavada said. “There seem to be reasonable explanations for either forming these features through a series of short-lived episodes or a sustained warmer climate, but we’ll be able to add to that with the evidence that we find in our study of Mount Sharp.”

Many scientists already conjectured Gale Crater was once home to a lake.

“What is new is the way that we deduced its presence by using rover-based observations,” said John Grotzinger, Curiosity’s project scientist at JPL.

The rover crossed over a boundary from an area with rock deposits that were laid down by flowing water into a new geologic zone with rock layers that show signs they formed in a standing body of water.

In between the two regions, imagery from the rover showed rock layers at an incline, a feature often seen at the mouths of rivers.

“When rivers encounter a lake, the water in the river channel decelerates, then all the sediments carried in the river abruptly deposit,” Gupta said.

The deposits are tilted to the south, suggesting water was flowing toward Mount Sharp.

The observation set up a paradox for the rover science team. The inclined rocks indicated the rivers emptied into a lake where Mount Sharp sits today, with the water appearing to flow uphill.

“When we saw the inclined strata and they were dipping toward Mount Sharp, that was really a great surprise,” Grotzinger said.

To solve the riddle, Grotzinger said rover scientists proposed the hypothesis that Mount Sharp was not there when the rivers were active.

Gupta said the rover’s camera has identified inclined rock beds higher up on the mountain, a sign that the site experienced multiple episodes of river flows or precipitation, perhaps separated by periods of evaporation when the lake dried up.

Once the rivers dropped their sediments into the crater, the material hardened into rock and was eroded to shape Mount Sharp.

“We are beginning to think that maybe Mount Sharp formed in a series of episodes involving sedimentation and erosion stacked by different processes,” Grotzinger said.

Vasavada said the rover’s discoveries could help answer key questions about the climate on ancient Mars that can’t be addressed from remote sensing instruments in orbit.

“What’s new with Curiosity is that this evidence is from close-up study of sediments carried by the water, and in that respect provides more clues than the existing wealth of evidence for early wet Mars based on only studying landforms from orbit like the valley networks on Mars’ highlands,” Vasavada said.

“Recent studies of all these data tend to push warm and wet Mars a little later in its history than we previously thought to about three-and-a-half billion years ago,” Vasavada said. “It also extends the time over which potentially habitable enviornments may have been present.”

Proof that an ocean once filled a giant basin in the Martian northern hemisphere has been hard to come by. Channels carved out of highland regions appear to lead into the theorized ocean, but hard evidence the sea ever existed has eluded scientists.

“Other than the geologic evidence, there’s a way to infer an ocean from the climatology,” Vasavada said. “If we require precipiation at Gale Crater over a long period of time, if we have a long-standing lake for millions of years, the atmospheric humidity practically requires a standing body of water like an ocean to keep Gale from evaporating and to keep a vigorous hydrological cycle going. We’ll continue to look at that and add to that pretty intriguing question.”

Scientists plan to use the rover to test their lake hypothesis and get a better understanding of what was happening on Mars before Mount Sharp formed. 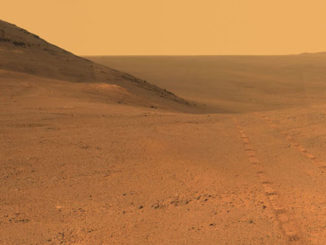 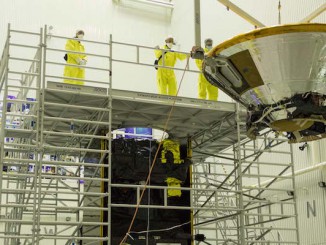 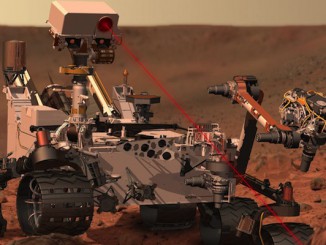