Inverted cables on the Vega rocket’s upper stage control system apparently caused the launcher to tumble minutes after liftoff Monday night, a failure that resulted in the loss of a Spanish Earth observation satellite and a French research probe, Arianespace officials said Tuesday.

Officials from Arianespace — the French company that manages Vega rocket launches — said Tuesday engineers reviewed telemetry data and documentation overnight, and found the most likely cause of the launch failure was a case of human error.

The cabling problem caused the engine to move its nozzle in the wrong direction in response to commands from the rocket’s guidance system. That resulted in the rocket losing control and tumbling just after ignition of the upper stage engine around eight minutes after launch.

Lagier characterized the inverted cables as a “human error,” and not a design problem.

The lower three solid-fueled stages of the Vega rocket performed normally, accelerating the launcher to a speed of nearly 17,000 mph, or 7.6 kilometers per second, just shy of the velocity needed to enter Earth orbit.

The Vega rocket’s Attitude and Vernier Upper Module, or AVUM, stage was supposed to fire its main engine four times to deploy the SEOSAT-Ingenio and Taranis satellites into two slightly different orbits around 420 miles (676 kilometers) above Earth.

The first AVUM burn was programmed to place the satellites into a preliminary parking orbit. Without the burn, the rocket and its two satellite payloads fell back to Earth and burned up during atmospheric re-entry. Any debris from the vehicle fell into an uninhabited area in the Arctic.

Arianespace and the European Space Agency will set up an independent commission to investigate the launch failure. ESA’s inspector general will lead the inquiry, according to Stéphane Israël, Arianespace’s CEO.

The accident on Monday night’s launch was the second launch failure in the last three flights of Europe’s Vega rocket program. Vega launchers accomplished 14 consecutive successful missions since the rocket’s debut in 2012, before a Vega flight failed in July 2019 with the Falcon Eye 1 military spy satellite for the United Arab Emirates.

Investigators traced the cause of the Falcon Eye 1 accident to a “thermo-structural failure” on the forward dome of the Vega rocket’s solid-fueled second stage, which led to the in-flight breakup of the launch vehicle.

An upgraded rocket named the Vega C with more powerful first and second stage motors is scheduled to launch for the first time in mid-2021. The Vega C will be able to carry up to 50 percent more payload mass to orbit than the basic version of the Vega rocket.

Israël said the failure on Monday night’s mission has “nothing to do” with the Vega failure last year.

The previous failure was linked to a weakness of the design,” Israël told reporters Tuesday. He added that the design problem blamed for the 2019 failure has been corrected, resulting in the Vega rocket’s successful return to flight mission in September.

Israël said the misplaced cables identified as the most likely cause of Monday night’s failure was a “quality and production issue.”

“We are looking at all processes to better understand why this integration mistake was not corrected,” Israël said.

Arianespace and ESA officials said they will hold a press conference once the investigation is complete.

The AVUM upper stage’s structure is produced by Airbus, and the Ukrainian rocket contractors Yuzhnoye and Yuzhmash supply the AVUM stage’s main engine, which consumes hydrazine and nitrogen tetroxide propellants.

Spain’s SEOSAT-Ingenio satellite was riding in the upper position of the Vega rocket’s Vespa dual-payload dispenser, while France’s Taranis research payload launched in the lower berth of the Vega payload shroud

Designed primarily for civilian use, SEOSAT-Ingenio was supposed to collect imagery for the European Commission’s Copernicus program, which includes a fleet of dedicated Sentinel environmental monitoring satellites. As a contributing mission in the Copernicus fleet, SEOSAT-Ingenio was expected to supplement data gathered by the Sentinel satellites distributed worldwide and free of charge.

SEOSAT-Ingenio was owned by the Spanish government, but the European Space Agency provided assistance to the project in technical and contractual matters. ESA was also in charge of arranging the satellite’s launch with Arianespace.

A primary goal of the SEOSAT-Ingenio project, which Spain’s government kicked off in 2007, was to foster a growing Spanish space industry. About 80 percent of the spacecraft was manufactured in Spain.

“The first objective has been fully achieved,” Aschbacher said Tuesday. “Spanish industry has now the full capacity to implement complete space system … The second objective has not been achieved due to the loss of SEOSAT-Ingenio in this very unfortunate launch failure.”

Aschbacher said the SEOSAT-Ingenio satellite was not insured against a launch a failure. It is standard practice for governmental missions not to acquire launch insurance, he said.

Juan Carlos Cortés, director of space and dual programs at the Spanish Center for the Development of Industrial Technology, aid the SEOSAT-Ingenio project cost around 200 million euros, or $236 million.

Aschbacher said ESA “is ready to support” the Spanish government to “explore possible options to establish a national optical Earth observation system to replace the one that failed on this launch.”

The 385-pound (175-kilogram) French Taranis research satellite was designed to trace the origins of mysterious luminous phenomena above thunderstorms. Taranis, led by the French space agency CNES, would have attempted to untangle what triggers these brief flashes above thunderstorms, and how the transient events might affect conditions within the atmosphere or in space.

“We lost a beauty of technology, the fruit of more than 15 years of hard work in French industry and CNES,” said Lionel Suchet, chief operating officer of CNES. “But this kind of event is part of our difficult job, and we have to face it together.”

Suchet said CNES will examine new possibilities to pursue the research objectives of the Taranis mission.

“We lost a satellite, but all is not lost,” Suchet said.

While the near-term schedule of Vega launches is clouded by the failure Monday night, Arianespace will continue with preparations for three missions before the end of the year using Russian Soyuz rockets.

A Soyuz rocket is scheduled for launch Nov. 28 from French Guiana with the UAE’s Falcon Eye 2 military spy satellite, followed by a Soyuz launch from the Vostochny Cosmodrome in Kazakhstan in mid-December with 36 OneWeb broadband satellites.

Another Soyuz mission is tentatively scheduled for launch in late December from French Guiana with the French military’s CSO 2 optical reconnaissance satellite.

All three Soyuz missions are managed by Arianespace, which markets Ariane 5, Soyuz, and Vega launch services. 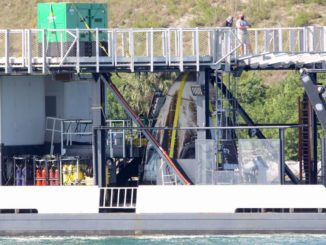 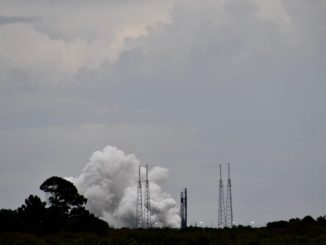 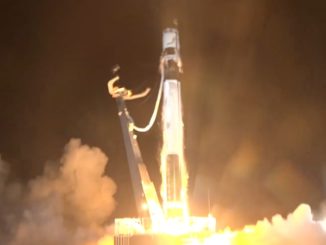