A Russian Soyuz booster arrived at its launch pad on the Kazakh steppe Sunday, the last stop before liftoff Wednesday with a three-person crew bound for the International Space Station.

The Soyuz-2.1a rocket emerged from its assembly building at sunrise Sunday for the railroad trek to pad 31 at the Baikonur Cosmodrome in Kazakhstan. After the Soyuz reached the pad, hydraulic cylinders raised the three-stage rocket vertical and gantry arms folded into position around the launcher.

Ground crews began a series of final inspections, engine preparations and closeouts before the Soyuz rocket is filled with kerosene and liquid oxygen propellants in the final hours before launch. Liftoff is set for 1:45 a.m. EDT (0545 GMT; 10:45 a.m. Baikonur time) Wednesday.

Two Russian cosmonauts and one U.S. astronaut will ride the Soyuz MS-17 spaceship into orbit, kicking off a fast-track, two-orbit rendezvous with the space station. Assuming an on-time launch, the crew capsule is scheduled to link up with the Rassvet module on the space station at 4:52 a.m. EDT (0852 GMT).

The launch from Baikonur is timed for roughly the moment the space station flies directly overhead the spaceport in Central Asia.

Commander Sergey Ryzhikov will ride in the center seat during the Soyuz MS-17 spacecraft’s three-hour pursuit of the space station. Ryzhikov, 46, is a former MiG-29 fighter pilot in the Russian Air Force and a veteran of one previous flight to the space station in 2016 and 2017, when he logged 173 days in orbit.

NASA astronaut Kate Rubins will take her place in the right-hand seat inside the Soyuz crew capsule. Rubins, born in Connecticut and raised in California, will launch on her 42nd birthday to kick off her second expedition on the space station after 115-day mission in 2016. She earned a Ph.D in cancer biology, worked in public health, and studied infectious diseases before her selection as a NASA astronaut candidate in 2009.

The three-person crew will join space station commander Chris Cassidy and his Russian crewmates Anatoly Ivanishin and Ivan Vagner for a week-long handover. Cassidy, Ivanishin, and Vagner are due to return to a parachute-assisted landing in Kazakhstan on Oct. 21 aboard their Soyuz MS-16 spaceship, wrapping up more than six months in orbit.

Ryzhikov, Kud-Sverchkov, and Rubins are scheduled to spend six months living and working on the space station. Their return to Earth is slated for April 17.

Another four astronauts are scheduled to launch in early-to-mid-November from NASA’s Kennedy Space Center in Florida on SpaceX’s Crew Dragon spacecraft. That will boost the space station crew size up to seven.

More photos of the Soyuz rocket’s rollout to the launch pad are posted below. 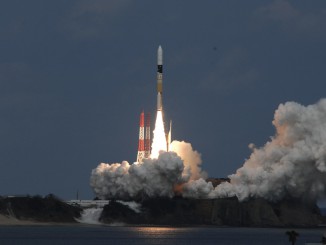 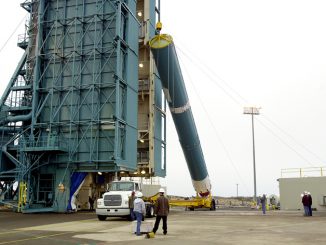 Delta 2 rocket being assembled at Vandenberg for penultimate launch