EDITOR’S NOTE: Northrop Grumman scrubbed the Antares launch attempt Thursday, Oct. 1. The launch has been rescheduled for 9:16 p.m. on Friday, Oct. 2. See our Mission Status Center for live coverage of the countdown and launch.

On the cusp of the company’s next Cygnus resupply flight to the International Space Station set for launch Thursday night from Virginia, Northrop Grumman officials said they are eager for NASA to approve more Cygnus cargo missions beyond those already on contract through 2022.

The Cygnus spacecraft set for launch Thursday from Wallops Island, Virginia, will fly the third of those six cargo mission booked by NASA with Northrop Grumman on the CRS-2 contract. It will be the Northrop Grumman’s 14th commercial resupply launch to the space station overall since 2014, including Cygnus missions flown by predecessor companies Orbital Sciences and Orbital ATK.

The Cygnus spacecraft set for launch Thursday is named the S.S. Kalpana Chawla in honor of one of the astronauts who died on the space shuttle Columbia tragedy in 2003. Liftoff on top of a Northrop Grumman Antares rocket from the Mid-Atlantic Regional Spaceport at Wallops is scheduled for 9:38:44 p.m. EDT Thursday (0138:44 GMT Friday), following a two-day delay to wait for improved weather at the launch site on Virginia’s Eastern Shore.

The commercial supply ship is packed with 7,829 pounds (3,551 kilograms) of experiments, hardware, and other goods for the space station and its crew, according to NASA.

Assuming the robotic supply ship blasts off as scheduled Thursday night, the Cygnus spacecraft should reach the space station early Sunday. The station’s Canadian-built robotic arm will grasp the cargo craft and mount it on the research lab’s Unity module for a stay lasting more than two months.

Like previous Cygnus flights, the spacecraft will depart the space station and head for a destructive re-entry over the Pacific Ocean, disposing of several tons of trash packed by the astronauts aboard the orbiting outpost.

Between leaving the station and entering the atmosphere, scientists will activate a flame combustion experiment housed in the Cygnus cargo module to gather data on the spread of fire in different pressure and oxygen environments expected in next-generation crew vehicles traveling into deep space.

Scientists will also use the fire experiment — the fifth in a series of NASA-developed combustion investigations hosted on Cygnus missions — to test fire detection and clean-up techniques. NASA says the Cygnus spacecraft is well-suited for fire experiments because it offers a pressurized compartment similar to crew cabins on human-rated spaceships, but there are no astronauts on-board after the cargo ship leaves the space station.

Among clothing, food and other crew provisions, the Cygnus mission launching Thursday night will deliver an upgraded toilet to the space station, allowing astronauts to test its functionality before a similar commode flies on the Orion crew capsule to the moon.

Northrop Grumman, SpaceX, and Sierra Nevada were each guaranteed at least six cargo missions under the CRS-2 contracts announced in 2016. So far, NASA has not issued contract extensions for additional missions beyond the first six CRS-2 cargo flights.

“NASA is working through their plan for the missions beyond the first six (on the CRS-2 contract),” DeMauro told Spaceflight  Now in a recent interview. Obviously, we’e flying our third mission on CRS-2 already. So at this pace we’ll be through our first six missions in the early part of ’22.”

“So we’re looking forward to NASA finalizing their plans for additional missions beyond that,” DeMauro said. “Of course, there are two other providers, so they’re working through that process. We’re optimistic that NASA will continue to utilize the services that we provide.”

Each of NASA’s cargo providers offer different types of services.

The Cygnus spacecraft can carry up more volume than the SpaceX and Sierra Nevada vehicles, and it attaches to a berthing location on the space station with a wider hatch than the docking port where the Dragon 2 cargo ship will dock.

SpaceX’s Dragon 2 will be able to return experiment specimens and other hardware to Earth intact, allowing scientists to analyze results and engineers to inspect and refurbish things like spacesuits.

The Sierra Nevada Dream Chaser, which has not yet flown in space, will also return to Earth intact. But will land on a runway instead of splashing down at sea like SpaceX’s Dragon. That offers a more gentle ride for sensitive cargo, and gives scientists quicker access to their experiments after their return from the space station.

NASA and its international partners plan to continue operating the International Space Station well into the 2020s, and the research complex will continue to require regular crew and cargo transportation services.

Northrop Grumman and its suppliers on the Cygnus cargo program have expanded the supply service’s capabilities since the first Cygnus and Antares test flights in 2013. The Cygnus now flies with an expanded pressurized module, and the Antares rocket launches with more powerful engines.

Engineers also devised a way to open the top of the Antares rocket’s payload shroud while the vehicle is horizontal at the launch pad, allowing ground teams to load time-sensitive cargo into the Cygnus spacecraft as late as the day before liftoff. The Cygnus spacecraft has also hosted numerous rideshare payloads, deployed CubeSats, and served as a standalone scientific experiment platform to add to the space station’s lab capacity.

“We’re excited about the upgrades we’ve made to our vehicles over time,” DeMauro said. “We believe we’re a reliable partner for NASA. We’re responsive to what they need. We offer valuable services in terms of the amount of pressurized up-mass we can provide, as well as that critical service of taking away that pressurized disposal mass. Now we’ve demonstrated the capability to fly Cygnus for long term in orbit. We fly now several secondary payloads now each mission.

“So we’re optimistic that those capabilities can continue to be attractive to NASA, and as they put their plans in place for extension missions, that we’ll be able to be part of that,” DeMauro said.

He said NASA has a “little bit of time” to order additional cargo missions without an interruption in Northrop Grumman’s Cygnus and Antares supply chains. Contractors often say a temporary pause in spacecraft production can lead to additional costs.

“In general, it’s always best — and we think it’s in our customers’ interests, too — to keep the product line flowing, keep the hardware moving, keep the suppliers engaged with the hardware we deliver,” DeMauro said. “We have a very stable configuration of Cygnus right now in terms of the service module design and the cargo module design. We’ve built it to be extremely flexible, so we can take on all sorts of different rideshare payloads and secondary payloads.

“Right now, NG-17 is still two years away, maybe, from its mission, so I think there’s a little bit of time, but certainly everyone will benefit to getting additional missions on order, so that we can continue the flow of hardware,” DeMauro said.

But the company has also offered NASA the option to launch Cygnus cargo freighters with larger pressurized modules on more powerful United Launch Alliance Atlas 5 rockets. Three Cygnus missions launched on Atlas 5 rockets from Cape Canaveral from 2014 through 2017 while the Antares rocket was being modified with a new main engine to replace a propulsion system blamed for an explosive launch failure in 2014.

A third Cygnus mission option would involve replacing the pressurized cabin, made by Thales Alenia Space in Italy, with a platform to mount large external cargo units, such as science instruments or spare parts to be attached on the exterior of the space station. It would also launch on an Antares rocket.

“Our Ukrainian suppliers are finishing up the cores for NG-16 and NG-17 as we speak,” Eberly said in an interview with Spaceflight Now.

Ahead of the shipment of the NG-16 and NG-17 core stages to Wallops, Eberly said Northrop Grumman participated in a virtual acceptance review with the Antares core stage contractors in Ukraine. The meeting was conducted remotely due to the COVID-19 pandemic.

“We’re hopeful that we receive more orders beyond that,” Eberly said. “We’ve already been talking to our suppliers, and they’re ready to build more cores for us, whatever we need.”

Meanwhile, service modules for the NG-15, NG-16 and NG-17 missions are moving through testing and assembly at Northrop Grumman’s manufacturing facility in Dulles, Virginia, DeMauro said.

So far, all 12 Antares rocket launches to date have been devoted to the space station cargo program. NASA selected the Antares rocket to be eligible to launch the space agency’s research satellites in 2012, but the availability of the Antares has not netted any firm launch contracts.

Eberly said the Antares rocket is also included among Northrop Grumman’s fleet of launch vehicles available to the U.S. military under the Orbital Services Program-4, or OSP-4, contract awarded last year. Northrop Grumman is also offering the smaller solid-fueled Minotaur rocket family and the air-launched Pegasus XL to the military under the OSP-4 contract, in which the Space Force can order launch services on a mission-by-mission basis for light and medium-class satellites.

Northrop Grumman has regularly won satellite launch business with the Minotaur rocket family carrying military and intelligence-gathering payloads into orbit. But the air-launched Pegasus XL rocket has no more missions in its backlog, and so far, the military has not reserved an Antares launch. 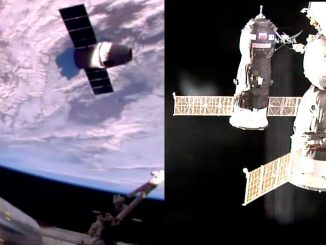 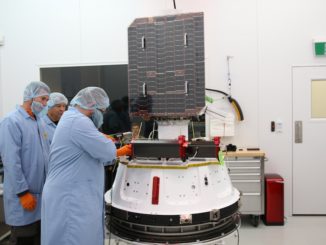 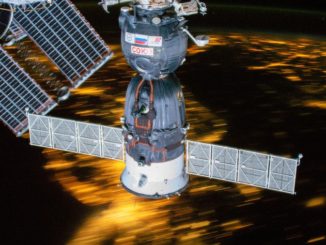