United Launch Alliance said Thursday it is targeting Sept. 26 for the next attempt to send a classified U.S. government spy satellite into orbit aboard a Delta 4-Heavy rocket, following an abort Aug. 29 just three seconds before liftoff from Cape Canaveral.

A computer automatically called the abort Aug. 29 after one of the rocket’s three Aerojet Rocketdyne RS-68A main engines had already ignited. ULA said Thursday that the launch team determined “a ground system regulator internal component failure was the cause of the on-pad abort.”

Three flow rate regulators are used in the high-pressure helium gas system that spins up the turbines on the Delta 4-Heavy’s three RS-68A main engines. The rocket’s starboard engine fired up normally, but a regulator for the center engine’s regulator did not open.

The Delta 4-Heavy is made of three common booster cores, each powered by a single RS-68A engine. The engines are timed to ignite in a staggered sequence in the last few seconds before launch, beginning with the starboard engine and followed by the center and port engines.

Tory Bruno, ULA’s president and CEO, said the root cause of the regulator problem was a torn diaphragm. Bruno tweeted that the diaphragm tear appeared to be caused by wear and fatigue.

ULA said Thursday that it is replacing and retesting all three pressure regulators associated with each of the three RS-68A engines “out of an abundance of caution.” The regulators themselves are part of the ground infrastructure on the Delta 4’s launch pad at Complex 37B on Cape Canaveral Air Force Station.

The launch period Sept. 26 opens at 12:01 a.m. EDT (0401 GMT) and runs until 1:35 a.m. EDT (0535 GMT), ULA said Thursday. The Delta 4-Heavy will loft a classified payload into orbit for the National Reconnaissance Office, which owns the U.S. government’s fleet of intelligence-gathering satellites.

The mission is designated NROL-44, and the NRO has not disclosed details about the payload’s purpose or design.

But public information about the rocket’s trajectory suggests the Delta 4-Heavy will deploy its payload near geosynchronous orbit more than 22,000 miles (nearly 36,000 kilometers). The NRO operates signals intelligence satellites in geosynchronous orbit to intercept data, voice and other communications from U.S. adversaries.

The 235-foot-tall (71.6-meter) Delta 4-Heavy rocket is the most powerful rocket in ULA’s fleet, and the largest launch vehicle in the world. The Falcon Heavy rocket made by ULA rival SpaceX is slightly shorter than the Delta 4-Heavy, but can loft heavier cargo into orbit.

ULA is retiring the Delta 4 rocket family after five more launches. The company’s next-generation Vulcan Centaur rocket, scheduled to debut in the second half of next year, will replace ULA’s existing Delta 4 and Atlas 5 launch vehicles.

After the Sept. 26 launch, ULA’s next Delta 4-Heavy rocket is scheduled to take off no earlier than December from Vandenberg Air Force Base in California. Bruno said ULA is reviewing maintenance and test procedures at the Delta 4 pads at Cape Canaveral and Vandenberg to ensure the facilities are ready to support the remaining Delta 4 flights.

“We are conducting a very detailed and comprehensive review of all of our preventative maintenance and pre-launch testing processes at the Delta pads and will make whatever improvements are indicated going forward,” Bruno tweeted. 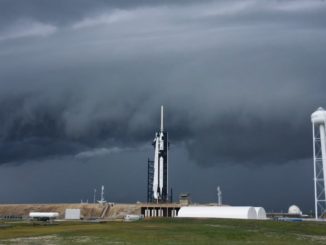 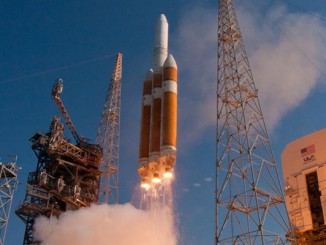