SES has selected United Launch Alliance and SpaceX to launch up to five new commercial C-band communications satellites from Cape Canaveral in 2022 aboard Atlas 5 and Falcon 9 rockets, officials announced Wednesday.

The SES 18 and 19 satellites, based on Northrop Grumman’s GEOStar 3 satellite platform, will launch stacked together on a SpaceX Falcon 9 rocket from Cape Canaveral in 2022, SES said. SES also awarded SpaceX a contract to launch another C-band satellite if required.

The SES 20 and 21 communications satellites are slated to launch in tandem aboard a ULA Atlas 5 rocket, also in 2022, SES said.

SES ordered the four satellites from Boeing and Northrop Grumman in June to replace C-band capacity being transitioned to 5G cellular network services by the Federal Communications Commission. At the same time, Intelsat ordered six new C-band communications satellites from Maxar and Northrop Grumman as part of its C-band transition plan. Launch services contracts for the new Intelsat satellites have not been announced.

SES said it considered only U.S. launchers when awarding the launch services contracts, and having the new satellites in geostationary orbit on time is a high priority. That essentially left ULA and SpaceX as the only companies eligible for the contracts.

Financial terms for the launch contracts were not disclosed by SES, SpaceX, or ULA.

Suzanne Ong, an SES spokesperson, said the division of launch contracts between ULA and SpaceX — rivals in the U.S. launch business — fit the different offerings provided by the Atlas 5 and Falcon 9 rockets.

The Atlas 5 rocket will deploy the SES 20 and 21 satellites into a higher orbit, utilizing the long-duration, multiple-restart capability of the rocket’s Centaur upper stage. That will place the satellites closer to their final operating positions in geostationary orbit more than 22,000 miles (nearly 36,000 kilometers) over the equator.

SES 20 and 21 will be built by Boeing and based on the Boeing 702SP spacecraft bus with all-electric propulsion. Electric thrusters are more efficient than conventional rocket engines, allowing the satellite to need less fuel during its mission. That results in a lighter satellite.

But the electric thrusters do not have as much thrust as a liquid-fueled thruster, so it takes longer for a satellite with all-electric propulsion to reach geostationary orbit.

“The Boeing 702SP satellites, relying only on electrical propulsion, would take longer to reach designated geostationary orbit if launched on SpaceX,” Ong said in response to questions from Spaceflight Now. “This is the reason why ULA is launching Boeing satellites and SpaceX is launching the NG (Northrop Grumman) satellites.”

Jessica Rye, a ULA spokesperson, said the SES 20 and 21 satellites will launch on the “531” variant of the Atlas 5 rocket with a 5-meter payload fairing and three strap-on solid rocket boosters. That configuration has flown three times to date, and is set to launch a fourth time in September with a classified payload for the National Reconnaissance Office, the U.S. government’s spy satellite agency.

“Clearing mid-band spectrum expeditiously while protecting cable neighborhoods across America is a huge undertaking and one that requires partners that can deliver mission success and schedule assurance,” said Steve Collar, CEO at SES. “We are thrilled to be working with ULA again and partnering to meet the FCC’s ambitious timeline for the accelerated clearing of C-band spectrum.”

“We are pleased SES selected ULA and our proven Atlas 5 for this important commercial launch service,” said Tory Bruno, ULA’s president and CEO. “Atlas 5 is known for its unmatched level of schedule certainty and reliability and this launch is critical to the timely clearing of C-band spectrum, empowering America’s accelerated implementation of 5G.

“ULA’s legacy of performance, precision and mission design flexibility allow us to deliver a tailored launch service that minimizes orbit raising time and perfectly meet our customer’s requirements,” Bruno said in a statement. “We are thrilled to provide this optimized launch solution to SES for this crucial launch.”

Two SES satellites have launched on previous Atlas 5 rocket missions in 2004 and 2006. ULA now has two commercial launches in its Atlas 5 backlog, along with a ViaSat 3 broadband payload due to fly on the most power Atlas 5 configuration with five solid rocket boosters.

The Northrop Grumman-built SES 18 and 19 satellites will use a combination of electric and liquid propulsion for post-launch orbit-raising maneuvers.

“We have a deep and trusted relationship with SpaceX having been the first to launch a commercial satellite with them and subsequently the first commercial company to adopt the flight-proven booster and we could not be more confident in their ability to deliver on this time-critical mission,” Collar said in a statement.

“SES is one of SpaceX‘s most-valued partners, and we are proud of their continued trust in our capabilities to reliably deliver their satellites to orbit,” said Gwynne Shotwell, SpaceX’s president and chief operating officer. “We are excited to once again play a role in executing SES’s solutions to meet their customers’ needs.”

“The ground spares will only be launched if there is a systematic problem that delays the satellite construction, or if there is a launch failure or any other issue that puts the accelerated clearing schedule at risk,” Ong said in response to questions from Spaceflight Now. “In case of a launch failure, SpaceX will launch one of the other C-band satellites that SES will order soon.”

The four SES satellites are part of the Federal Communications Commission’s order finalized earlier this year to clear 300 megahertz of C-band spectrum for the roll-out of 5G mobile connectivity networks.

The FCC plans to auction U.S. C-band spectrum — currently used for satellite-based video broadcast services to millions of customers — to 5G operators in December. In compensation for losing the spectrum, Intelsat is set to receive $4.87 billion and SES will get $3.97 billion from 5G bidders if they can accelerate the transition of C-band services to a smaller swath of spectrum by December 2023, two years before the FCC’s mandated deadline.

Intelsat and SES — along with operators with a smaller share of the U.S. C-band market — will also be reimbursed for their C-band relocation costs, including satellite manufacturing and launch expenses.

As part of the agreement, the satellite operators were incentivized to buy new C-band broadcasting satellites from U.S. manufacturers to operate in the 4.0 to 4.2 gigahertz swath of the C-band spectrum. The lower portion of the band previously allocated to satellite operators — 3.7 to 4.0 megahertz — is being transitioned to 5G services.

Ong said the ground spares SES is set to order soon will be available to launch on short notice to ensure SES can meet the FCC’s deadline to clear the upper part of the C-band spectrum for 5G services.

When it ordered the four new satellites from Boeing and Northrop Grumman in June, SES said each satellite will have 10 primary transponders, plus back-up equipment, to deliver television services to more than 120 million homes and enable other critical data services. At that time, SES said the satellites are scheduled for launch in the third quarter of 2022.

SES said in May that its board of directors approved an investment envelope of $1.6 billion to procure and launch the new C-band satellites, and pay for other equipment and services, such as signal filters on ground antennas, to accommodate the C-band transition to 5G services. 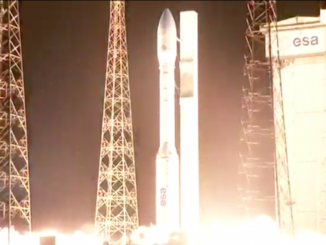 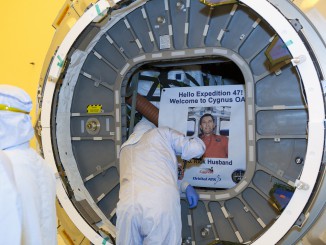 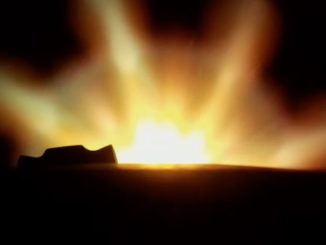