EDITOR’S NOTE: The launch has been postponed again due to high-altitude winds.

Funded by the European Space Agency, the adapter structure was designed and manufactured in the Czech Republic and Italy. Engineers say it can be reconfigured in different arrangements to allow for launches with varying numbers of CubeSats and larger minisatellites as large as a refrigerator.

Arianespace and Avio — the Vega launch service provider and the Vega prime contractor — hope the Small Spacecraft Mission Service, or SSMS, multi-satellite dispenser can be launched once per year if there’s enough demand from international satellite companies and European government agencies.

There are 53 satellites from 21 customers in 13 countries — including ESA member states and the United States — aboard the Vega rocket awaiting liftoff from the Guiana Space Center in South America at 9:51:10 p.m. EDT Saturday (10:51 p.m. EDT; 0151 GMT Sunday).

The Vega rocket’s solid-fueled first stage will propel the launcher north from French Guiana. After successive burns by the Vega’s second and third stages, the rocket’s restartable liquid-fueled fourth stage will ignite two times to place the satellites in a polar sun-synchronous orbit orbit 320 miles (515 kilometers) above Earth at an inclination of 97.45 degrees.

The seven largest satellites will separate from the rocket in that orbit between 40 and 53 minutes after liftoff. Two more brief firings by the Vega’s fourth stage will boost the remaining 46 nanosatellites into a slightly higher 329-mile-high (530-kilometer) orbit with an inclination of 97.51 degrees.

The last of the CubeSats will separate from the Vega upper stage around an hour and 45 minutes into the mission.

The rideshare launch was supposed to occur last year, but a Vega rocket failed during a flight in July 2019. The launch Saturday night will be the first Vega mission since the failure, which engineers traced to a structural failure on the Vega’s second stage.

Before the failure, the Vega rocket had amassed 15 straight successful launches since its debut in 2012.

Days before the Vega rocket’s return-to-flight launch date in March, Arianespace suspended launch preparations due to the coronavirus pandemic. Launch preparations resumed in May, and the mission was set to lift off June 18, but high winds have kept the rocket on the ground.

“New customers are keen to take their place on our next rideshare,” Lafranconi said in a statement. “This gives us a lot of confidence that this new service will become a vital element of the Vega launch service.”

“This SSMS dispenser makes effective use of every available space thanks to a modular design approach,” said Giorgio Tumino, ESA’s Vega and Space Rider program manager. “The lower section is hexagonal and can hold six nanosatellites or up to a dozen CubeSat deployers. The upper section is used for microsatellites, minisatellites and small satellites. The lower section can also be used independently, coupled with a larger satellite replacing the top section.”

The SSMS structure is designed to be as light as possible, using low-density aluminum sandwich panels covered in a carbon fiber reinforced polymer skins, according to ESA.

“Our objective is to ensure maximum flexibility, with an SSMS dispenser able to be assembled very close to the launch date and to meet the requirements of any mission,” Tumino said.

The first SSMS mission set for launch Saturday is a proof of concept flight to demonstrate the Vega rocket’s capability to deliver clusters of small satellites into orbit. The mission’s payload of 53 satellites sets a record for the most spacecraft launched on a single European rocket.

The satellites on the SSMS proof of concept flight range in mass between about 2 pounds (1 kilogram) and 330 pounds (150 kilograms), according to Arianespace.

The highest number of satellites launched on a single Vega rocket to date was nine spacecraft on the launch vehicle’s inaugural flight in 2012.

An Indian Polar Satellite Launch Vehicle carried 104 small satellites into orbit in 2017, a record for the most spacecraft launched on one rocket. SpaceX has launched 60 Starlink Internet satellites — each weighing about a quarter-ton — on individual Falcon 9 rockets multiple times.

Officials aggregated satellites from the European Space Agency and commercial companies for the SSMS proof of concept flight.

The satellite sitting on top of the stack was built by Maxar Technologies. In its press kit for the launch, Arianespace describes the satellite as a “small experimental communication spacecraft,” but the launch provider says the the satellite’s final customer is “undisclosed.”

The 304-pound (138-kilogram) satellite is believed to be a technology demonstration spacecraft named Athena. PointView Tech, a subsidiary of Facebook, is testing technologies that could be used in a future constellation of small satellites to provide global broadband Internet services. Athena is PointView Tech’s first satellite.

A 330-pound (150-kilogram) spacecraft developed by the Italian space company D-Orbit is also riding to space on the Vega rocket. D-Orbit’s ION CubeSat Carrier is loaded with 12 SuperDove Earth-imaging CubeSats for Planet, which will be released after the carrier craft separates from the Vega rocket’s upper stage in orbit.

If you include the 12 SuperDoves inside the ION CubeSat carrier, the SSMS proof of concept mission is actually launching with 65 satellites.

D-Orbit plans to develop more capable CubeSat carriers for future missions with propulsion systems that could maneuver customers’ nanosatellites into different orbital slots after separation from their launch vehicle, giving CubeSat operators the ability to still put their spacecraft into tailored orbits even if riding on a rideshare flight to a slightly different altitude or inclination.

The launch marks the first use of D-Orbit’s InOrbit Now, or ION, service.

The largest satellite ever built in Luxembourg is also hitching a ride into orbit on the Vega launch vehicle. Named ESAIL, the 246-pound (112-kilogram) spacecraft was developed in partnership between ESA and exactEarth, a Canadian company with maritime tracking sensors on more than 60 satellites already in orbit.

ESAIL is part of an ESA initiative called SAT-AIS, managed within ESA’s telecommunication program office, which aims to foster the development of a fleet of small satellites to receive and relay Automatic Identification System signals from ships.

Built by LuxSpace, ESAIL was funded by the Luxembourg Space Agency and other ESA member states. The project also received private funding from exactEarth, which will operate the satellite on a commercial basis.

Slovenia’s NEMO-HD Earth-imaging microsatellite is also on the Vega launch. The 143-pound (65-kilogram) NEMO-HD spacecraft will collect medium-resolution color still and high-definition video imagery that can be downlinked to the ground in realtime.

NEMO-HD was built in Canada at the University of Toronto Institute for Aerospace Studies Space Flight Laboratory for the Slovenian Center of Excellence for Space Sciences and Technologies, or SPACE-SI.

A 99-pound Spanish microsatellite named UPMSat 2 is also on the SSMS rideshare cluster. Loaded with tech demo payloads, it was developed as an educational project by students at the Polytechnic University of Madrid since 2009.

The ÑuSat 6 Earth-imaging microsatellite is also awaiting launch. It’s the next spacecraft to join a remote sensing satellite fleet owned by Satellogic, an Argentine company.

Satellogic plans to deploy a fleet of 90 microsatellites primarily using Chinese rockets. ÑuSat 6 will be Satellogic’s 11th satellite to launch, and the first to fly on a European rocket.

A small satellite designed to monitor greenhouse gases in Earth’s atmosphere is also set for blastoff. The GHGSat C1 satellite, with a launch mass of about 34 pounds (15.4 kilograms), is owned by a startup named GHGSat based in Montreal.

The Canadian-built spacecraft is the second to launch for GHGSat, which says the satellite will be capable of detecting methane emissions from specific sources, such as oil and gas wells. Buoyed by financial infusions from climate-focused investment funds, the oilfield services company Schlumberger, and the governments of Canada, Alberta and Quebec, GHGSat aims to field a fleet of greenhouse gas-monitoring satellites to feed data to regulators and industry.

The Vega rocket will carry up 46 nanosatellites along with the seven heavier payloads.

Swarm Technologies has 12 of its tiny SpaceBEE satellites, each about the size of a slice of bread, ready for liftoff on the Vega rocket. The “BEE” in SpaceBEE stands for Basic Electronic Element.

In addition to the 12 SuperDove CubeSats inside the free-flying ION CubeSat carrier, Planet has 14 other SuperDoves on the Vega launch. They will eject out of a CubeSat deployer mounted directly on the SSMS rideshare structure.

The Seattle-based launch broker Spaceflight arranged for the launch of Swarm’s SpaceBEEs and 14 of Planet’s SuperDoves on the Vega mission.

There are 8 new Lemur-2 CubeSats for Spire Global’s fleet of nanosatellites tracking ships and collecting atmospheric data that could improve the accuracy of weather prediction models.

A pair of briefcase-sized 6U CubeSats developed by ESA and the Polytechnic University of Catalonia in Barcelona, Spain, will augment data provided by Europe’s Sentinel environmental monitoring satellites. The FSSCat A and B CubeSats carries instruments to “measure soil moisture, ice extent, and ice thickness, and to detect melting ponds over ice,” according to the university’s nanosatellite laboratory.

SpacePharma, a Swiss-based company with a research lab in Israel, will launch its second CubeSat on the Vega rocket. The company is developing CubeSats to host pharmaceutical research experiments in microgravity.

Two Belgian CubeSats are also on the launch.

One of the nanosatellites, named PICASSO, was developed for ESA by the Belgian Institute of Space Aeronomy with VTT Finland and the UK’s Clyde Space. PICASSO will measure ozone on the stratosphere and collect temperature profile data in the upper atmosphere.

The SIMBA CubeSat will measure how much solar energy enters Earth’s atmosphere, a variable that has a big impact on Earth’s climate. SIMBA was developed for ESA by Belgium’s Royal Meteorological Institute, the University of Leuven, and Innovative Solutions in Space in the Netherlands.

The TRISAT CubeSat developed by the University of Maribor in Slovenia and is designed to demonstrate Slovenian spacecraft and remote sending technologies. The TTU100 CubeSat from the Tallinn University of Technology in Estonia carries Earth observation cameras.

The NAPA 1 CubeSat will be Thailand’s first military satellite. Built in the Netherlands, it’s designed to demonstrate Earth-imaging capabilities that could be used in future satellites owned by the Royal Thai Air Force.

Kepler Communications, a Toronto-based company, plans to launch its third and final technology demonstration satellite on the Vega rocket. Named TARS, the satellite will test equipment Kepler plans to incorporate into a planned constellation of 140 commercial data relay nanosatellites in low Earth orbit.

The first satellite manufactured in Monaco, named OSM-1 CICERO, is the product of a partnership between Orbital Solutions Monaco and GeoOptics, which has a fleet of CICERO CubeSats collecting radio occultation data. The radio occultation technique works by measuring how the atmosphere changes satellite radio signals, yielding profiles fo atmospheric conditions useful in climate research and weather forecasting.

There’s also a CubeSat on the Vega launch manufactured by Tyvak Nano-Satellite Systems of California for an undisclosed customer. It is only designated as Tyvak 0171 in Arianespace’s launch press kit. 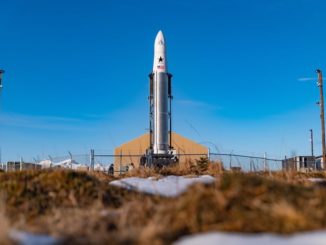 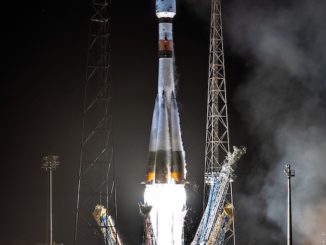 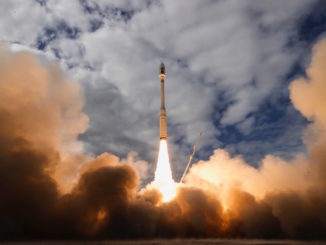