An Intelsat communications spacecraft running low on fuel has resumed commercial operations more than 22,000 miles (nearly 36,000 kilometers) over the Atlantic Ocean after getting an assist from a pioneering servicing satellite earlier this year.

A first-of-its-kind Mission Extension Vehicle built in Virginia by Northrop Grumman docked with the Intelsat 901 satellite Feb. 25, accomplishing the first link-up between two satellites in geosynchronous orbit, a region high above the equator where spacecraft move at speeds that match the rate of Earth’s rotation.

The automated link-up, performed by on-board navigation sensors and orchestrated by ground teams, also marked the first time a satellite connected autonomously with another object in orbit that was never designed for docking.

Northrop Grumman’s first Mission Extension Vehicle took over propulsion and attitude control duties for the Intelsat 901 satellite, which launched in June 2001 aboard a European Ariane 4 rocket with design lifetime of 13 years. The satellite is still capable of providing services for Intelsat customers, but would have been retired soon without the help of Northrop Grumman’s servicing craft.

Intelsat 901 is now in a position along the equator at 27.5 degrees west longitude, where it is relaying trans-Atlantic television, voice and data traffic.

“With a focus on providing the best customer experience in our industry, Intelsat is proud to have pioneered this innovative first with Northrop Grumman,” said Mike DeMarco, Intelsat’s chief services officer. “We see increased demand for our connectivity services around the world, and preserving our customers’ experience using innovative technology such as MEV 1 is helping us meet that need.”

Since its docking with Intelsat 901 in late February, the MEV 1 satellite servicer maneuvered the communications satellite from a position over the Pacific Ocean to its new operating location over the Atlantic with the help of ultra-efficient ion thrusters. MEV 1 also nudged Intelsat 901 back over the equator from its earlier orbital inclination of 1.6 degrees.

Intelsat said it transitioned roughly 30 of its commercial and government customers to Intelsat 901 over a six-hour period April 2. The company said Friday that the spacecraft — nearly six years beyond its original design life — is now “providing full service to Intelsat customers.”

“Intelsat views life-extension services, like MEV technology, as a cost-effective and efficient way to minimize service disruptions, enhance the overall flexibility of its satellite fleet and better support the evolving needs of its customers,” Intelsat said in a statement.

“Our partnership with Intelsat was critical to delivering this innovative satellite technology into operation,” said Tom Wilson, president of SpaceLogistics LLC, a wholly-owned subsidiary of Northrop Grumman. “This historic event, highlighted by the first in-orbit rendezvous and docking of two commercial satellites and the subsequent repositioning of the two-spacecraft stack, demonstrates the business value that MEV offers to customers.

MEV 1 launched last October on an International Launch Services Proton rocket from the Baikonur Cosmodrome in Kazakhstan. After climbing to an orbit matching that of Intelsat 901, MEV 1 performed a series of rendezvous maneuvers and rehearsal in February before moving in for docking.

In the final phase of the rendezvous, the servicing satellite extended a stinger into the main engine nozzle on Intelsat 901, which has not used its main thruster since the weeks after the satellite’s launch in 2001. Mechanical fingers then reached out and grabbed the target craft to pull the two satellites together.

Under the terms the contract with Intelsat, the MEV 1 spacecraft will provide propulsion capabilities to Intelsat 901 to extend its usable life for five years, then return the satellite to a decommissioning graveyard orbit. At the end of the five-year service, MEV 1 could dock with another satellite in geosynchronous orbit to serve another client.

Intelsat, one of the world’s largest and oldest commercial satellite operators, signed up as the anchor customer for the Space Logistics satellite servicing program in 2016. Intelsat said last year it is paying SpaceLogistics around $13 million per year for the life extension service.

Northrop Grumman and SpaceLogistics plan to launch a second Mission Extension Vehicle later this year from French Guiana aboard a European Ariane 5 rocket. The MEV 2 mission will target another aging Intelsat satellite, offering a new lease on life for the Intelsat 10-02 communications craft, which launched in 2004.

After MEV 2, Northrop Grumman and Space Logistics are developing a new generation of satellite servicing vehicles that could attach propulsion jetpacks to multiple spacecraft in a single mission. After a planned debut in 2024, the Mission Robotic Vehicle could also perform inspections and repairs in orbit.

“Now that MEV 1 has successfully delivered on its mission to place the Intelsat 901 satellite back into operational service, we will continue to pioneer the future of on-orbit servicing through our multi-year technology roadmap leading to additional services such as inspection, assembly and repair,” Wilson, the president of SpaceLogistics, said in a statement. 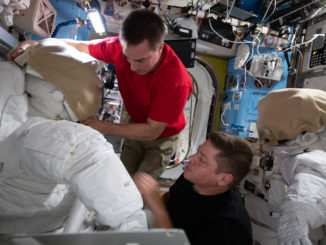 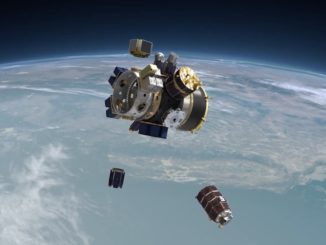 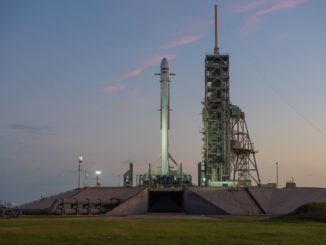