SpaceX says it is considering spinning off its Starlink broadband Internet project into a separate company, while teams at Cape Canaveral ready to launch around 60 more of the flat-panel data relay nodes into Earth orbit as soon as Feb. 15.

Bloomberg first reported this week that SpaceX is could create a new company to oversee the Starlink network and pursue a public stock offering, allowing investors to buy ownership shares in the Starlink project.

“Right now, we are a private company, but Starlink is the right kind of business that we can go ahead and take public,” said Shotwell, SpaceX’s chief operating officer, according to Bloomberg. “That particular piece is an element of the business that we are likely to spin out and go public.”

A separate SpaceX official confirmed Shotwell’s statement, saying that SpaceX is considering taking the Starlink project public, potentially in the next several years.

Founded and led by CEO Elon Musk, SpaceX is a privately-held company with a private valuation of some $33 billion, according to Bloomberg. Musk has said he has no plans for a public stock offering for SpaceX until the firm is flying people to Mars, the company’s long-term goal.

Much of the visible advancement on the Starlink project has been with satellite launches, but SpaceX is developing user terminals to allow consumers to link with the low-latency Internet network at home, in their businesses, or on the go. SpaceX also has a contract with the U.S. military demonstrate the Starlink network’s connectivity aboard aircraft.

Officials have not announced a price figure or projected bandwidth figures for consumer-grade Starlink subscribers. The Starlink network demonstrated data speeds of 610 megabits per second last year in a signal beamed to a military airplane.

SpaceX has launched 240 quarter-ton Starlink broadband satellites on for dedicated Falcon 9 launches from Cape Canaveral since May 2019, half of which have launched since the beginning of this year.

Ground crews at Cape Canaveral Air Force Station are preparing another Falcon 9 rocket, which has the capacity to carry up to 60 Starlink satellites into orbit, for liftoff as soon as Feb. 15 on the company’s fifth launch dedicated to building out the Internet network.

Liftoff of the Falcon 9 rocket Feb. 15 is tentatively scheduled for 10:46 a.m. EST (1546 GMT) from Cape Canaveral’s Complex 40 launch pad. After an hour-long mission, the Falcon 9 will deliver around 60 more Starlink satellites into low Earth orbit, en route to their final operating orbit at an altitude of 341 miles (550 kilometers).

The launch in mid-February will be SpaceX’s fourth Falcon 9 mission of the year, and the third in 2020 for the Starlink project after successful satellite deployments Jan. 6 and Jan. 29.

The Starlink fleet will initially number 1,584 satellites in low Earth orbit, according to SpaceX. But the company has approval from the Federal Communications Commission to operate as many as 12,000 satellites, and has informed global regulators it may seek authority to fly 30,000 more, for a total network of 42,000 spacecraft.

With 240 Starlink satellites launched since last May, SpaceX already owns the largest fleet of commercial satellites.

The size of the satellite fleet can be scaled depending on demand, according to SpaceX.

Another company, London-based OneWeb, is also deploying a global broadband Internet network with nearly 650 satellites in low Earth orbit. Amazon founder Jeff Bezos is also planning a constellation of commercial Internet satellites, but has not yet launched any satellites into orbit.

SpaceX plans to continue launching Starlink satellites as often as once every two weeks for the rest of the year. Before the start of 2020, officials said there could be as many as 24 Starlink launches on Falcon 9 rockets this year, and two are already complete.

Going into the year, SpaceX projected around 35 to 38 launches overall on the company’s 2020 manifest, including Starlink flights, crew and cargo missions for NASA, and commercial and military satellite missions.

After the Feb. 15 launch, SpaceX is gearing up for at least three launches in March, beginning with a liftoff scheduled no earlier than March 2 at 1:45 a.m. EST (0645 GMT) from Cape Canaveral’s Complex 40 launch pad with a Dragon cargo capsule heading to the International Space Station.

The March 2 launch will mark SpaceX’s 20th resupply flight to the space station, and the last cargo mission using the first-generation Dragon spacecraft, which flew in space for the first time in 2010. An upgraded Dragon 2 cargo vehicle, derived from SpaceX’s human-rated Crew Dragon spacecraft, will begin flying supplies to the space station on unpiloted missions in August.

Another Starlink mission is scheduled for liftoff in March from pad 39A at NASA’s Kennedy Space Center, followed by a mission in late March with Argentina’s SAOCOM 1B radar observation satellite from pad 40. 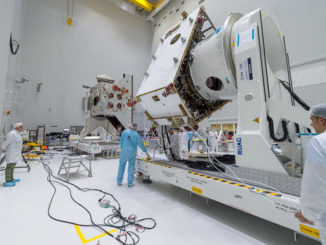 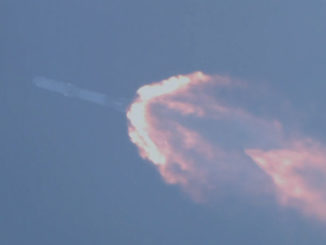 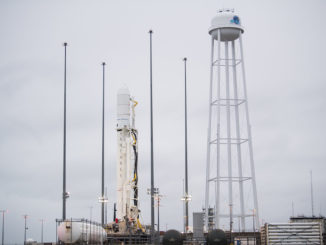