Teams working at the Kennedy Space Center in Florida last week connected a U.S.-built Orion crew module with its European-made power and propulsion element for the first time, a significant accomplishment ahead of the spacecraft’s shipment to Ohio this fall for testing inside the world’s largest vacuum chamber.

The connection of the Orion spacecraft’s two main elements is a major milestone as engineers ready the vehicle for an unpiloted test flight to lunar orbit and back to Earth, a precursor to a follow-on mission that will carry astronauts back to the vicinity of the moon for the first time since 1972.

The first space mission under NASA’s Artemis program, recently named for the twin sister of Apollo in Greek mythology, will launch on top of the Space Launch System heavy-lift rocket. Delays in the development of the SLS rocket’s core stage have delayed the Artemis 1 launch from 2020 until 2021, a schedule slip officially acknowledged for the first time last week by NASA Administrator Jim Bridenstine.

Vice President Mike Pence announced the completion of the Orion spacecraft in a speech at the Kennedy Space Center on Saturday.

“Today, thanks to the hard work of the men and women of NASA and of American industry, the Orion crew vehicle for the Artemis 1 mission is complete and ready to begin preparations for its historic first flight,” Pence said.

The Lockheed Martin-built Orion crew module, with its base heat shield and thermal protection tiles, is now sitting on top of the moon ship’s service module manufactured in Europe by Airbus Defense and Space. The European Space Agency funded development of the Orion service module under an agreement with NASA, giving European industry a critical role in the U.S.-led deep space exploration program.

“Throughout assembly, the team tested and validated the many systems a hundred different ways to ensure they will operate as designed in the harshness of deep space,” said Mike Hawes, Orion program manager for Lockheed Martin. “The Artemis 1 flight will test the design and workmanship of the capsule and its service module during the three-week mission out around the Moon and back. We’re excited for this mission as it paves the way for the first crewed mission in 2022, Artemis 2.”

Ground teams inside the Neil Armstrong Operations and Checkout Building at KSC hoisted the crew module on top of the service module inside the Final Assembly and System Testing, or FAST, cell last week. Final integration tasks between the two vehicles are currently underway, Lockheed Martin said, including the mating of physical retention bolts and umbilical lines.

The service module arrived at the Kennedy Space Center in November from an Airbus factory in Bremen, Germany. Soon after is arrival, technicians installed an adapter to the top of the service module to accommodate the Orion crew module, then put the service module through acoustic testing using speakers to blast the spacecraft with sound, simulating the experience of launching on top of the SLS rocket.

Lockheed Martin completed a similar acoustic test on the Orion crew module earlier this year before wrapping up final assembly tasks on the the capsule.

The pressure shell for the Artemis 1 mission’s Orion crew module arrived at the Kennedy Space Center on Feb. 1, 2016, from the Michoud Assembly Facility in New Orleans, where Lockheed Martin technicians completed the initial welding of the spacecraft’s primary structure.

Teams in Florida installed the capsule’s avionics computers, wiring harnesses, and propellant tanks and 12 rocket thrusters to control the capsule’s orientation through atmospheric re-entry at the end of its mission. Workers also added the capsule’s 16-foot-diameter base heat shield, access hatch, 11 parachutes, forward bay cover, and other components.

“The avionics are in, the propulsion is in, the heat shield is on,” said Mike Hawes, Orion program manager at Lockheed Martin, NASA’s prime contractor for the human-rated spaceship, in an interview with Spaceflight Now earlier this month.

ESA and NASA announced the agreement for Europe to provide the first full-up Orion service module in 2013. At the time, ESA agreed to supply parts for the Orion service module for the ship’s first mission with a crew, then known as Exploration Mission-2 and since renamed Artemis 2.

Since 2013, ESA has agreed to build two full service modules for the Artemis 1 and 2 missions, and the space agency launched procurement for a third Orion service module with Airbus last year. ESA officials have expressed interest in providing additional service modules well into the 2020s.

The service module is fitted with four solar array wings that will unfurl into an X-wing configuration after launch, and it has 33 engines and thrusters to control the Orion capsule’s orientation and adjust its trajectory after launch. The main engine for Artemis is a refurbished Orbital Maneuvering System engine that flew on the space shuttle.

The OMS engines were mounted on pods on each side of the shuttle’s vertical tail, used to change the craft’s orbit and begin the spaceship’s trip back to Earth with a deorbit burn.

Valves inside the propulsion system has been one of the most challenging parts of the service module’s development. On the crew module side, one component requiring extra focus has been the side hatch. NASA originally intended to fly a makeshift metal covering over the hatch opening on the Artemis 1 mission, but later decided to fly the full hatch design.

With the two Orion segments physically connected, all that’s left is powering up the full vehicle, conducting a fully-integrated systems test, final installation of closeout and backshell panels, and putting payloads, cameras and instrumented dummies inside the pressurized crew module to collect data on the environment inside the spacecraft for astronauts.

The solar array wings, main engine nozzle and other equipment will also be installed on the service module.

NASA’s Super Guppy cargo plane will ferry the Orion spacecraft to Ohio for testing inside a huge chamber built to expose the vehicle to the super-cold airless conditions of deep space. Engineers will also conduct an electromagnetic interference and compatibility test with the Orion spacecraft before shipping it via air back to Florida.

By next spring, the Orion spacecraft should be back at KSC and ready for handover to the ground operations team, which will affix the abort system on top of the capsule, fill the spaceship with propellants, and ready Orion for stacking on top of the Space Launch System inside the Vehicle Assembly Building.

Read our earlier story for more information on road ahead before the Orion spacecraft’s first flight to the moon.

Although Orion may be ready next year, challenges constructing the SLS core stage have delayed the launch of the Artemis 1 mission until 2021.

The Artemis 1 mission will send the Orion spacecraft into a distant retrograde lunar orbit and back to Earth using a pair of close lunar flybys some 62 miles (100 kilometers) from the moon’s surface. Depending on the time of year of the mission’s liftoff, the Artemis 1 flight could last from 26 to 42 days.

If that unpiloted demonstration goes well, NASA plans to put astronauts on the next SLS/Orion launch, designated Artemis 2, in 2022 or 2023. On that mission, the Orion crew will fly on a “free return” trajectory, looping around the moon and back to Earth.

The Trump administration has directed NASA to return humans to the lunar surface by the end of 2024. NASA says the Artemis 3 mission — the third SLS/Orion flight — could be ready to launch in 2024, rendezvousing with a planned mini-space station near the moon called the Gateway, where a commercially-built lunar lander could be waiting too carry the astronauts to the lunar surface. 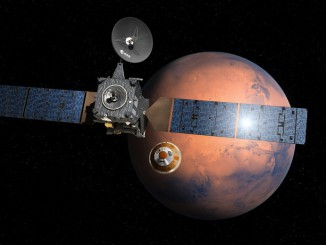 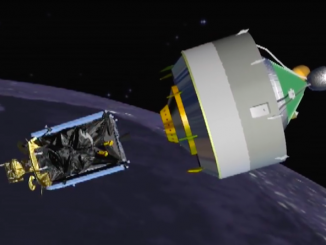 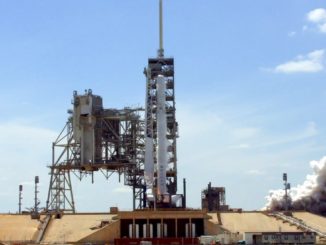