The weather outlook for Saturday’s launch calls for partly cloudy skies, breezy winds from the west-southwest, and mild temperatures. The only slight concern is with potential violations of the cumulus cloud and thick cloud launch weather rules.

Liftoff of the human-rated capsule — flying without astronauts this time — is scheduled for 2:49:03 a.m. EST (0749:03 GMT), roughly the moment the Earth’s rotation brings launch pad 39A at the Kennedy Space Center under the space station’s orbital path.

Mission managers could adjust the launch time by a few seconds in the coming days based on updated tracking of the space station’s orbit. The precise launch time Saturday will enable the Crew Dragon spacecraft to reach the orbiting research complex for an automated docking at 6 a.m. EST (1100 GMT) Sunday.

Spaceflight Now members can watch a live video feed of pad 39A as SpaceX prepares for Saturday’s early morning launch. IF you’re not a member, you can sign up today to support our coverage.

“Relatively dry southwesterly flow will keep rain probabilities low, with surface winds relatively weak,” forecasters from the Air Force’s 45th Weather Squadron wrote in an outlook issued Tuesday. “The forecast yields only slight concerns of any cumulus cloud or thick cloud rule violations during the primary launch window on Saturday. Maximum upper-level winds will be from the west near 80 knots at 45,000 feet.”

Officials from NASA and SpaceX will convene a launch readiness review Wednesday to discuss the status of launch preparations. If managers clear the Crew Dragon spacecraft and its Falcon 9 launcher for liftoff Saturday, the rocket is scheduled to roll out of SpaceX’s hangar at pad 39A some time Thursday for the trip up the ramp to the launch mount.

An erector will raise the Falcon 9 rocket vertical for final servicing and countdown preparations.

With a good weather forecast, officials are hopeful the rocket can take off early Saturday. Backup launch opportunities are available March 5 and March 9, when the space station’s position in its orbit would allow the Crew Dragon to reach the outpost the day after launch. Then the Crew Dragon demonstration flight would have to stand down until after the launch of a three-person space station crew March 14 from Kazakhstan aboard a Russian Soyuz rocket.

A long-range forecast predicts a wetter weather pattern early next week, and forecasters expect a 40 percent probability of conditions preventing a launch attempt on the backup opportunity March 5.

Assuming an on-time launch and docking this weekend, the Crew Dragon spacecraft will depart the space station March 8 and return to a parachute-assisted splashdown in the Atlantic Ocean around 240 miles (390 kilometers) east of Cape Canaveral. A newly-outfitted recovery ship, with hardware and experts to secure the Crew Dragon after it returns to Earth, will retrieve the capsule and bring it back to port.

The upcoming Crew Dragon test flight is a major checkout of SpaceX’s human-rated spacecraft, which the company developed in partnership with NASA. The U.S. space agency has a $2.6 billion contract with SpaceX to fund the design, development and testing of the Crew Dragon spacecraft.

NASA has a similar contract worth $4.2 billion with Boeing, which is developing its CST-100 Starliner crew capsule, giving U.S. astronauts two transportation providers to low Earth orbit, and ending NASA’s reliance on Russian Soyuz vehicles for the job.

Following the unpiloted test flight, SpaceX will refurbish and refuel the same Crew Dragon vehicle for an in-flight abort test this spring. The abort demonstration will verify the spacecraft can fire its escape thrusters to fly away from a failing booster in flight.

Then a new Crew Dragon vehicle will be prepared for launch with a two-man team of NASA astronauts as soon as July. NASA shuttle veterans Robert Behnken and Doug Hurley will fly the Crew Dragon to the space station on a second test flight — known as Demo-2 — before the commercial spaceship is certified to begin regular crew rotation flights to the research outpost. 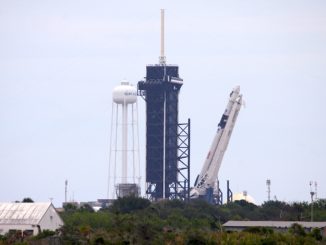 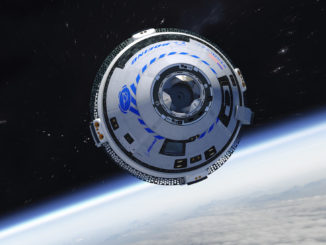 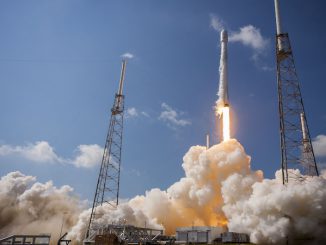