Officials announced a new target launch date of Wednesday in a tweet Monday, after a two-day delay triggered by high winds at the West Texas launch site, and a technical concern with the New Shepard vehicle. The two-day slip this week came after a delay from December to resolve an unspecified “ground infrastructure issue.”

The launch from Blue Origin’s test facility north of Van Horn, Texas, will mark the 10th flight of a New Shepard rocket, and the fourth flight of the reusable New Shepard vehicle currently in service.

Blue Origin did not release a target launch time for Wednesday, but warnings issue to pilots about the flight suggest airspace over the privately-operated facility in West Texas is closed for the launch between 1330 and 2000 GMT (8:30-3:00 p.m. EST; 7:30-2:00 p.m. CST).

When it takes off, the flight is expected to climb to an altitude of more than 60 miles — or 100 kilometers — powered by a hydrogen-fueled BE-3 engine. NASA research payloads will fly inside a crew capsule on top of the New Shepard booster, but no passengers will be aboard the launch.

The booster and capsule will separate after shut down of the rocket’s main engine. Both vehicles will come back to Earth, with the rocket aiming for a controlled vertical touchdown on a landing pad with the help of a braking burn from a hydrogen-fueled BE-3 engine, and the capsule parachuting to the desert floor a few miles away.

Ariane Cornell, Blue Origin’s head of astronaut strategy and sales, said at an industry conference Jan. 8 that the next New Shepard flight is a stepping stone before the company begins flying employees, and eventually paying passengers, to the edge of space and back.

“We do have another launch coming up relatively soon, which will be another test in terms of proving out New Shepard before we put people onboard,” Cornell said at the American Institute of Aeronautics and Astronautics’ SciTech Forum in San Diego. “We’re getting there, I’m just as anxious as you all are, but we have to do it right, and everybody wins when we do it right.”

Cornell said Jan. 8 that Blue Origin is “aiming to fly people early in 2019.”

“But let’s be very clear … only when we’re ready,” she said. “Believe me, if I could, I would jump on top of that rocket tomorrow. We’ve already had several successful tests with New Shepard, and so I would love to go. But we’re not selling tickets yet. We have not selected a price yet, despite what you might have read … We haven’t determined when we’re going to sell tickets. We are so focused right now on testing New Shepard through and through.”

The upcoming launch will be Blue Origin’s first flight since July 18, when engineers demonstrated the vehicle’s high-altitude abort capability.

Blue Origin is currently flying its third New Shepard booster, after losing the first vehicle during a landing accident and retiring the second rocket. A fourth New Shepard rocket has arrived at Blue Origin’s West Texas launch site from the company’s headquarters near Seattle to prepare for flights with people.

Blue Origin’s main competitor in the suborbital space tourism market — Virgin Galactic — flew its SpaceShipTwo rocket plane to the edge of space for the first time Dec. 13 with two test pilots at the controls.

The SpaceShipTwo rocket plane reached a maximum altitude of 51.4 miles, or 82.7 kilometers, on last month’s test flight, above the 50-mile mark used by the U.S. Air Force and the Federal Aviation Administration to determine who gets awarded astronaut wings. Blue Origin’s New Shepard flights, none of which have carried passengers or employees to date, have reached altitudes over the 100-kilometer (62-mile) Kármán line, the internationally-recognized boundary of space.

An April 29 New Shepard test launch flew to an altitude of 351,000 feet, or about 107 kilometers. Bezos said that is the altitude Blue Origin targets for operational New Shepard flights.

While Blue Origin has not announced a ticket price and is not accepting applications for a ride, Virgin Galactic says it has received deposits from hundreds of people for a $250,000 ticket to space, where passengers will experience several minutes of weightlessness.

Blue Origin is developing a much bigger rocket named New Glenn to carry satellites, and eventually people, into orbit. 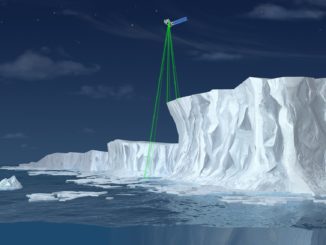 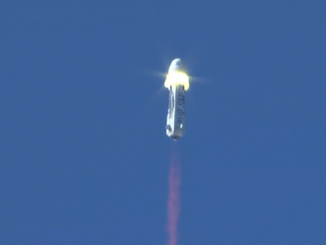 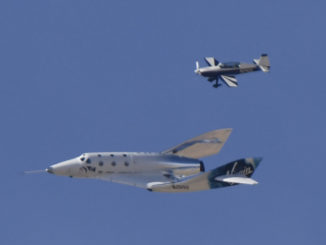