A pair of tiny automated robots touched down on asteroid Ryugu on Friday after separating from Japan’s Hayabusa 2 spacecraft, sending back pictures as the probes bounced across the asteroid’s alien landscape nearly 200 million miles from Earth.

The miniature rovers, each smaller than the diameter of a typical dinner plate, were released from the Hayabusa 2 spacecraft Friday as the spacecraft descended within 200 feet (as close as 55 meters) from Ryugu.

“The good news made me so happy,” said Takashi Kubota, a spokesperson for the Hayabusa 2 mission. “The image taken by MINERVA-II-1 during a hop allowed me to relax as a dream of many years came true. I felt awed by what we had achieved in Japan. This is just a real charm of deep space exploration.”

Carried aboard the Hayabusa 2 spacecraft since its launch from Earth in December 2014, the disk-shaped MINERVA-II robots floated down to the asteroid, tugged by Ryugu’s tenuous gravity — 80,000 times weaker than Earth’s — until they reached the surface at a speed predicted to be less than 1 mph (about 30 centimeters per second).

The robots returned imagery and science data to controllers on Earth via the Hayabusa 2 mothership, showing smeared views of Ryugu’s boulder-strewn surface and the Hayabusa 2 spacecraft itself as the landers tumbled toward the asteroid.

Officials from the Japan Aerospace Exploration Agency confirmed Friday that the MINERVA-II robots separated from Hayabusa 2 as planned. The Hayabusa 2 team provided play-by-play updates on Hayabusa 2’s descent toward Ryugu from a “home position” around 12 miles (20 kilometers) from the asteroid, tweeting images from the craft’s navigation camera as it maneuvered closer to the asteroid.

In a press conference Friday following the deployment of the MINERVA-II rovers, Japanese scientists said they received data from the landers as they headed toward the asteroid.

“The two rovers are in good condition and are transmitting images and data,” JAXA said in a statement Saturday. “Analysis of this information confirmed that at least one of the rovers is moving on the asteroid surface.”

So far, none of the images released by JAXA were captured on Ryugu, but the robots are covered in solar cells, allowing their batteries to be recharged for continued operations.

“I cannot find words to express how happy I am that we were able to realize mobile exploration on the surface of an asteroid,” said Yuichi Tsuda, Hayabusa 2’s project manager, in a JAXA statement. “I am proud that Hayabusa2 was able to contribute to the creation of this technology for a new method of space exploration by surface movement on small bodies.”

Japanese scientists celebrated the feat, which came 13 years after Japan’s predecessor Hayabusa mission deployed a similar lander at asteroid Itokawa. But the first MINERVA rover missed Itokawa and floated off into space.

“I was so moved to see these small rovers successfully explore an asteroid surface because we could not achieve this at the time of Hayabusa, 13 years ago,” said Makoto Yoshikawa, Hayabusa 2’s mission manager. “I was particularly impressed with the images taken from close range on the asteroid surface.”

MINERVA stands for MIcro Nano Experimental Robot Vehicle for Asteroid, and Hayabusa 2 carried three second-generation MINERVA-II rovers. The third lander will be released for another descent to Ryugu some time next year.

Another lander, slightly bigger than the MINERVA-II rovers, is set for a descent to asteroid Ryugu on Oct. 3. The Mobile Asteroid Surface Scout, or MASCOT, lander was jointly developed by the German and French space agencies and measures about the size of a shoebox.

Like the Japanese-built MINERVA-II rovers, MASCOT will attempt to hop to different locations on Ryugu, taking pictures and collecting scientific measurements about the asteroid’s environment and composition.

The MINERVA-II robots each weigh a little more than 2.4 pounds (1.1 kilograms), and carry cameras, thermometers and other sensors to investigate Ryugu from the surface. The MINERVA-II landers each have a diameter of 6.7 inches (17 centimeters) and stand around 2.7 inches (7 centimeters) tall.

“Although I was disappointed with the blurred image that first came from the rover, it was good to be able to capture this shot as it was recorded by the rover as the Hayabusa 2 spacecraft is shown,” said Tetsuo Yoshimitsu, a member of the Hayabusa 2 team responsible for the MINERVA-II rovers. “Moreover, with the image taken during the hop on the asteroid surface, I was able to confirm the effectiveness of this movement mechanism on the small celestial body and see the result of many years of research.”

The Hayabusa 2 mothership was responsible for placing the landers on a trajectory toward Ryugu’s northern hemisphere.

NASA’s NEAR-Shoemaker mission was the first spacecraft to achieve a soft landing on asteroid, when it made a controlled touchdown on Eros in 2001 and unexpectedly continued beaming science data back to Earth. But NEAR-Shoemaker did not return any asteroid images from the surface of Eros, leaving that “first” in space exploration still up for grabs.

Hayabusa 2 arrived at Ryugu in late June, kicking off more than a year of mapping, scientific surveys and a series of descents toward the asteroid to drop off landers and pick up rock samples for return to Earth.

The mission’s early reconnaissance of Ryugu allowed scientists to measure its size and mass. The asteroid has a slightly flattened shape, spanning around 3,280 feet (1 kilometer) in diameter along its equator and approximately 2,880 feet (880 meters) from pole-to-pole.

Ryugu makes one rotation every 7.63 hours and has a mass of roughly 450 million metric tons (496 million tons), yielding a calculation of the asteroid’s gravity.

Scientists say Ryugu is a C-type asteroid, suggesting it contains primitive building blocks left over the formation of the solar system 4.5 billion years ago. Managed by the Japan Aerospace Exploration Agency, Hayabusa 2 will bring back specimens of the asteroid’s primordial surface for analysis in sophisticated laboratories on Earth.

The spacecraft is scheduled to attempt to collect the first of three samples from Ryugu as soon as late October, using a pellet fired into the asteroid to force surface material through a funnel into a collection chamber. Hayabusa 2 rehearsed its descent maneuvers for the first time earlier this month, but aborted the approach after its laser navigation sensor was unable to provide range and closure rate information to the probe’s computer.

Engineers blamed the miscue on Ryugu’s dark, unreflective surface, and adjusted settings on the laser navigation sensor to prevent the problem from recurring in the future. No such issues were reported Thursday or Friday as Hayabusa 2 deployed the MINERVA-II landers.

Once it has specimens from Ryugu, Hayabusa 2 will fire its ion engines and depart Ryugu late next year, heading for a landing in Australia in December 2020. 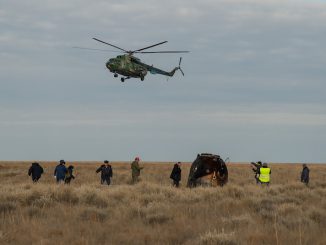 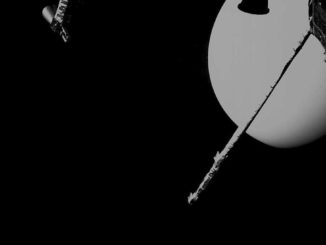 Mercury-bound spacecraft gets an assist from Venus