The maiden unpiloted flight of NASA’s Space Launch System, a heavy-lift human-rated rocket and one of the agency’s core programs, will likely not be ready for takeoff until 2020, officials said recently.

NASA officials until earlier this year aimed to launch the first SLS test flight in late 2018, but the space agency acknowledged in April that the huge super-booster’s first flight would be delayed until at least 2019.

After a multi-month assessment of the program’s recent progress, managers set a best-case launch target in December 2019. But engineers expect more development delays to materialize over the next couple of years during full-scale assembly and testing of the rocket’s core stage and the Orion spacecraft slated to ride it on a round-trip flight to lunar orbit and back to Earth.

Officials now expect the Space Launch System, Orion capsule and ground systems to be ready for the maiden flight — named Exploration Mission-1 — by June 2020. There is still some hope EM-1 could be ready sooner.

“While the review of the possible manufacturing and production schedule risks indicate a launch date of June 2020, the agency is managing to December 2019,” said acting NASA Administrator Robert Lightfoot. “Since several of the key risks identified have not been actually realized, we are able to put in place mitigation strategies for those risks to protect the December 2019 date.”

A report by the Government Accountability Office released in April underlined several technical and schedule concerns responsible for EM-1’s launch delay: A missed delivery date for the European-made service module set to power NASA’s Orion crew capsule, snags in the welding of parts of the SLS core stage due to low weld strength, and a tornado that struck a production site in New Orleans in February.

NASA concurred with the report’s findings and set out to establish a new target launch date.

The Trump administration also directed NASA early this year to study the feasibility of putting astronauts on EM-1, which will be the first launch of the SLS and the second flight of an Orion spacecraft, but the first with Orion’s European-built power and propulsion module. NASA announced in May that EM-1 will remain an uncrewed test flight.

Manufacturing of the SLS core stage at NASA’s Michoud Assembly Facility in New Orleans picked up pace this year, and all major structural components of the stage have completed fabrication in a giant 170-foot-tall (52-meter) welding device specially built for the Space Launch System.

The liquid hydrogen tank — stretching more than 130 feet (39 meters) long — takes up most of the core stage. The SLS main stage also comprises a liquid oxygen tank, an aft engine section, an intertank section and a forward skirt.

The welding techniques to fuse segments of the SLS core stage proved challenging. A misalignment of the giant weld tool at Michoud halted core stage manufacturing in 2014 and 2015, and engineers had to resolve concerns about the thickness of the aluminum welds.

The SLS core stage will use the thickest structures ever assembled using friction stir welding, a process that uses heat from friction to forge materials together without melting them.

The Boeing contractor team in charge of the SLS core stage manufactured several test articles before pressing on with welding of tanks destined to fly on EM-1. Technicians finished welding of EM-1’s liquid hydrogen tank in September, marking the completion of all five pieces of the first core stage.

The next step will be outfitting the pieces with plumbing, wiring, avionics, orange foam for thermal protection, and four RS-25 main engines left over from the space shuttle program. The five components will be assembled to create the 212-foot-tall (64-meter) core stage.

“The big items are done, and the team is focused on the intricate details of outfitting the flight hardware to perform specific tasks for the most powerful rocket in the world,” said Chad Bryant, the SLS core stage manufacturing lead at NASA’s Marshall Space Flight Center in Huntsville, Alabama. “When assembled, the core stage will stand taller than a 20-story building and include hundreds of cables for everything from data collection to propulsion systems.”

Strength checks of SLS tank test articles will push the structures to their limits using two new test stands at Marshall in the coming months.

“The majority of work on NASA’s new deep space exploration systems is on track,” NASA said in a statement. “The agency is using lessons learned from first time builds to drive efficiencies into overall production and operations planning.”

Officials have established new production performance milestones to ensure the quality of future SLS core stage builds, and NASA and ESA have re-planned the schedule for the Orion service module to account for late deliveries.

In its maiden flight configuration, named Block 1, the heavy-lifter will be able to haul up to 77 tons (70 metric tons) of cargo to low Earth orbit, more than double the capacity of the most powerful launcher flying today — United Launch Alliance’s Delta 4-Heavy.

The Block 1 version of SLS will fly with an upper stage propelled by an Aerojet Rocketdyne RL10 engine, based on the Delta 4’s second stage.

SpaceX’s Falcon Heavy rocket, which could fly for the first time before the end of this year, will come in just shy of the SLS Block 1’s capacity, assuming the commercial space company gave up recovering its booster stages.

NASA plans to introduce a bigger four-engine second stage on the EM-2 launch, a configuration of the SLS named Block 1B. EM-2 will be the first SLS/Orion mission to carry astronauts to the vicinity of the moon, and is scheduled for launch around 2023, the agency said.

By the end of the the current fiscal year on Sept. 30, 2018, NASA will have spent $23 billion on the SLS, Orion and associated ground systems, with $15 billion of that investment coming since 2012, according to a NASA inspector general report released in April.

Those figures are on top of expenditures made by NASA on the Orion capsule, ground equipment and heavy-lift launcher concepts during the Constellation moon program, an initiative dating back to the George W. Bush administration that was canceled by President Obama in 2010 after cost overruns.

NASA is working on a concept called a Deep Space Gateway, a mini-space station that could be positioned orbit around the moon, to serve as a staging point for future government and commercial landing sorties to the lunar surface. If approved and funded, the first piece of the deep space station could be launched with EM-2 in 2023. 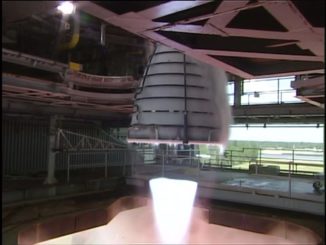 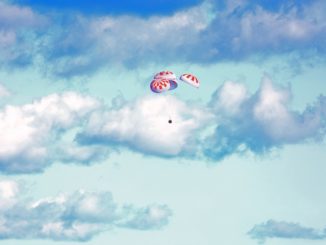 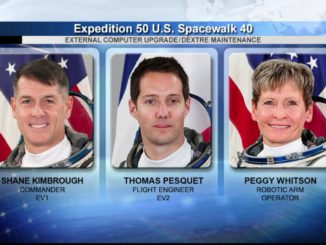