A European environmental satellite rode a solid-fueled Vega launcher from a tropical spaceport at the edge of the Amazon jungle into polar orbit Monday night, adding a new eye in the sky to check on the health of crops and forests from space.

The Sentinel 2B Earth observation spacecraft, packaged inside the nose cone of the 98-foot-tall (30-meter) Vega booster, blasted off at 0149:24 GMT Tuesday (8:49:24 p.m. EST Monday) from the Guiana Space Center on the northern shore of South America.

Moments after clearing the launch pad’s four lightning towers, the Vega’s first stage motor swiveled to steer the rocket on a trajectory north from the European-run space base, soaring over the Atlantic Ocean and passing east of the Lesser Antilles as its three Italian-made lower stages fired in quick succession.

A liquid-fueled fourth stage engine built in Ukraine fired two times to maneuver the 2,491-pound (1,130-kilogram) Sentinel 2B satellite into an on-target orbit around 488 miles (786 kilometers) above Earth.

The Vega rocket’s navigation computer aimed for a ground track tilted at approximately 98.5 degrees to the equator, a sun-synchronous orbit that will allow Sentinel 2B to image strips of territory at the same time each day.

Sentinel 2B separated from the Vega rocket’s upper stage around 58 minutes after liftoff.

Arianespace, the French company which manages Vega launch operations, declared the launch a success, making the Vega rocket nine-for-nine since its debut flight in February 2012.

Controllers at the European Space Operations Center in Darmstadt, Germany, established communications with Sentinel 2B as planned through a series of ground antennas in Australia, Antarctica and Alaska. The ground team verified the satellite’s health, and confirmed the craft’s power-generating solar panel unfurled and began tracking the sun, a key step in stabilizing the observatory and readying it for tests and commissioning.

Built by Airbus Defense and Space, Sentinel 2B joins an identical twin satellite launched in June 2015 for the European Commission’s Copernicus program, a multibillion-dollar network that will eventually consist of at least 15 spacecraft scanning the planet with radar, optical, infrared, microwave and laser instruments.

The Sentinel 2 satellites provide the Copernicus program’s optical component, specializing in mapping land surfaces, monitoring crops and forests, and detecting pollution in lakes, streams and coastal waters. Sentinel 2A and 2B are roughly analogous to the U.S. government’s Landsat satellite series, but with the ability to image the entire planet at faster tempos, a characteristic known as revisit time.

“Sentinel 2 is very unique,” said Philippe Goudy, head of Earth observation projects at the European Space Agency. “As we are changing the environment, we need to have more and more data about these changes we are putting on the environment. There is no similar mission that would give us the revisit, the coverage and the precision that Sentinel 2 will give us.”

Sentinel 2B’s orbit is positioned 180 degrees away from Sentinel 2A, and the satellites together will see every point on the planet at least once every five days. The revisit time will be cut to around three days at Europe’s latitude, and as short as one day in parts of Scandinavia and Canada, according to Bianca Hoersch, ESA’s Sentinel 2 mission manager.

The Sentinel 2B mission — valued at more than $150 million when combining the cost of the satellite and the launch — is the fifth Copernicus satellite to launch since deployments began in 2014.

“With this launch we are taking another step toward advancing the Copernicus program, which is the most sophisticated Earth observation system in the world,” said Jan Woerner, ESA’s director general. “And we are planning to add two more satellites to the constellation in the next months: with Sentinel 5P and Sentinel 3B.”

Sentinel 2B will be fully operational in three or four months, according to ESA, which manages the Copernicus satellites for the European Commission, the European Union’s executive body.

The observatory’s camera can see in 13 colors, giving it the sensitivity to distinguish between plant types, vegetation health, leaf area and chlorophyl and water content. During each orbit, the camera will take images in swaths 180 miles (290 kilometers) wide, resolving blocks of land as small as around 30 feet (10 meters).

“The main motivation behind this, obviously, is to keep track of how the landscape changes over time on a continental scale,” said Mátyás Rada, a scientist at the European Environment Information and Observation Network, part of the European Environment Agency, based in Budapest, Hungary. “For example, urban sprawl at the expense of agricultural land, deforestation, things like that.

“Thanks to the Sentinel missions, now we have the capacity to build entirely on European data inputs, and these maps can drive policies, function as a policy feedback, help spatial planning and decision-making,” Rada said.

Like other Sentinel satellites, Sentinel 2B carries a high-speed laser communications terminal to link up with relay satellites in geostationary orbit, hastening the delivery of data to end users.

“We monitor agriculture resources with satellite data aiming for early warning of droughts and crop failure, so that the responsible authorities can take action to prevent potential famine,” Shucknecht said in an ESA interview. “Just as we’re talking here, there is a severe drought ongoing in Somalia, and the most recent drought was just four years ago and cost the lives of 2,500 people. We use the satellite data to see where the cropland is, how the vegetation is developing, and then compare it to the long-term average so we can see if this season is going well or are there some problems.

“For Somalia, we saw the first signs of the drought in October, and now as the season is finished, we know that there was crop failure in many parts of the country, she said. “At the moment, we use moderate resolution data, so we can have a regional assessment, but if you wanted more higher-resolution data or information, you can use the Sentinel 2 data to even have field information.

“We provide the maps and outlook for the future, and then the governments or other authorites can take action,” Shucknecht said. “With this timely information, in the end, lots of lives can be saved.”

Next up for the Copernicus program is the launch of the Sentinel 5P satellite designed to monitor air quality and the ozone layer. It is currently scheduled to take off in June aboard a Russian Rockot vehicle.

More satellites will launch in the coming years to fill out the Copernicus constellation, and officials have already ordered replacements for some of the first-generation Sentinel observatories. For example, the Sentinel 2C and 2D satellites to take the place of Sentinel 2A and 2B will launch starting in 2021.

“This goes far beyond admiring technological prowess because, after all, it’s not just art for art’s sake,” said Philippe Brunet, director of space policy, Copernicus and defense at the European Commission. “It’s not just to put stuff out into orbit, it’s in order to allow society to enjoy benefits, and if we take a look at the different challenges facing Europe — climate change, security challenges, and perhaps in the future border monitoring issues — I think that programs such as Copernicus will provide far more than just technical prowess.”

Monday night’s launch of Sentinel 2B was the third of up to 12 Arianespace missions planned this year.

Arianespace’s next flight is scheduled for March 21, when a heavy-lift Ariane 5 rocket will loft a Brazilian government communications satellite and the Koreasat 7 video and television broadcasting station.

The next Vega launch is set for no earlier than August with a French-Israeli vegetation mapping satellite and an Israeli-built surveillance craft for the Italian military. 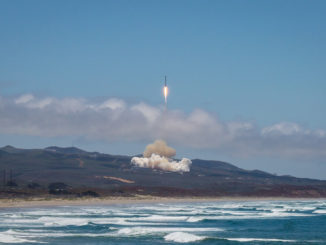 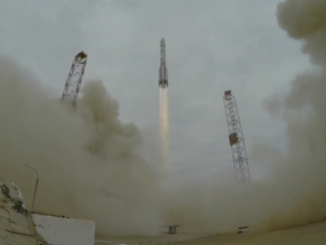 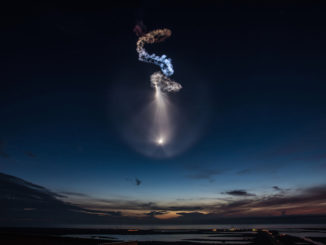