After waiting nearly two decades for dream to become reality, former Vice President Al Gore said Sunday the mission he fostered in 1998 — finally ready for launch this week — will have important scientific and social impacts in humanity’s relationship with Earth.

The mission Gore first proposed in 1998 has gone through starts and stops, surviving political roadblocks that put the former vice president’s dream and the hopes of scores of scientists on life support.

Now it is on the launch pad for a different reason than the purpose originally envisioned by Gore, but its complement of Earth viewing sensors remains intact.

“The scientists in NASA and NOAA, and some of their colleagues in the Air Force as well, have been steadfast in making it possible for this mission to come off,” Gore told reporters Sunday at the Kennedy Space Center.

He said he was “very excited” and “very grateful” for the mission to finally come to fruition.

The Deep Space Climate Observatory’s main mission now is to monitor the stream of particles flowing from the sun toward the Earth. NOAA says forecasters need to measurements to keep track of solar storms that envelop Earth, disrupting power grids, air travel, communications and satellite operations.

DSCOVR will launch Tuesday aboard a Falcon 9 rocket, which will boost the 1,250-pound satellite on a 110-day trip toward the L1 Lagrange point, a gravitationally-stable location nearly a million miles from Earth in line with the sun.

Although officials rejigged project for space weather forecasting — a move that included transfer of overall responsibility for the mission from NASA to NOAA — the spacecraft still hosts the same pair of instruments built 15 years ago to achieve Gore’s vision.

Gore announced his concept for mission during a speech at the Massachusetts Institute of Technology in March 1998. Gore’s vision was for the mission to produce live imagery of the full sunlit disk of Earth from four times the distance of the moon 24 hours a day. The pictures were to be posted on the Internet.

Gore named the project Triana, after the sailor that first spotted land on Columbus’s 1492 voyage to the Americas.

But the mission was grounded after Gore’s political rivals, and NASA’s own inspector general, raised concerns over Triana’s cost and scientific merit.

Congressional Republicans called the satellite an overpriced “screen saver” and named the mission as one of Gore’s pet projects.

Triana was originally due to launch on a space shuttle mission in 2000, but Congress ordered NASA to put the project on hold in late 1999 pending a review by the National Research Council.

The council, part of the National Academy of Sciences, concluded in March 2000 that Triana was a worthwhile mission that would collect unique data with important applications in climate change research.

NASA decided to suspend work on Triana in 2001, months after former President Bush took office following his defeat of Gore in the 2000 election. The spacecraft was transferred to a clean room at NASA’s Goddard Space Flight Center in November 2001, where it was stored under nitrogen purge conditions until it was removed for testing in November 2008.

Triana was renamed DSCOVR before NASA quietly cancelled the mission in 2005, citing the dwindling number of remaining shuttle flights and a lack of funding to refurbish and launch the satellite.

The cancellation came after NASA had spent $97 million on the project, according to agency officials.

“The whole idea of this satellite was Vice President Gore’s,” said Sen. Bill Nelson, D-Florida, who joined the former vice president at Kennedy Space Center. “Politics got in the way, and that mission was canceled, but fortunately some visionary folks in NASA and NOAA, in fact, knew that this payload was so important they kept it alive in storage.”

Worried that NASA’s Advanced Composition Explorer supplying critical data to space weather forecasters could fail at any time, NOAA started studying how to replace the aging ACE mission. It turned out the most affordable option was to take Gore’s bainchild out of its storage container for refurbishment and launch.

DSCOVR already had a plasma magnetometer bolted on that could measure the constant flow of atomic particles streaming away from the sun to measure the velocity, magnitude and direction of the solar wind’s magnetic field.

The camera on DSCOVR — named EPIC — will not fulfill Gore’s call for uninterrupted live imagery of Earth. Restrictions on the data flow from the spacecraft to the ground will limit it to about six full-color images of the whole day side of the Earth every 24 hours, officials said.

Gore said Sunday the mission will still offer inspirational views accessible to everyone.

“The constant ability to see the Earth — whole — fully sunlit every single day, the opportunity for every man, woman and child who lives on the Earth to see — if they wish — their own home in the context of the whole, can add to our way of thinking about our relationship to the Earth and, of course, the Earth’s ecosystem,” Gore said.

“Mobilizing the general public will to put pressure on political and governmental leaders in every nation to take action to save the future of human civilization is one of the principal missions here,” he said in a statement to reporters.

DSCOVR’s other payload is the NISTAR instrument manufactured by Ball Aerospace in partnership with the National Institute of Standards and Technology. It will take an accounting of how much radiation is reflected and emitted off Earth. Scientists say it can help determine how much of the energy comes from human activity.

“What this satellite will make it possible to do when it reaches the L1 point a 100-and-something days from now is to measure not only the energy coming into the Earth from the sun, which we can measure today, but we can also now, for the first time, measure the energy reflected back into space from the Earth,” Gore said. “You subtract that second number from the first number, and that’s the problem we’ve got to solve.”

“That’s why the ice is melting, and the sea level is rising in Miami Beach and a lot other places around the world,” Gore said. “That’s why the storms are getting bigger, and the floods, the mudslides and the droughts are getting deeper and longer, and the weather’s getting a little chaotic, and more chaotic year-by-year, as well as the temperature going up.”

The Air Force and NASA partnered with NOAA on the $340 million mission, with the Air Force paying SpaceX for the launch and NASA funding the EPIC camera and NISTAR instrument.

The four-megapixel EPIC camera aboard the spacecraft will see Earth in 10 wavelengths spanning the ultraviolet, visible and infrared portions of the spectrum. During the new moon phase, EPIC will see the moon pass through its narrow field-of-view, allowing the camera to make a family portrait of the Earth-moon system.

Like the rest of the spacecraft, the camera was made with 1990s technology. It was originally manufactured by Lockheed Martin’s Advanced Technology Center.

“I think it will be an inspiration for people to see the sunlit disk, when they can go online and take a look at something that was just taken from a unique vantage point,” Clarke said. “I know it will be for me, and I know my children will be happy to see that kind of thing.”

“It will be a whole new perspective,” said Nelson, a longtime member of Florida’s congressional delegation who flew on a space shuttle mission in 1986. “We had a different concept of ourselves when we saw our home taken from the perspective of the astronauts on the moon, or in lunar orbit, looking back at the Earth because suddenly we saw the planet as large as our thumbnail, and we could see our relationship to the cosmos.”

Gore said he sees cost reductions in renewable energy, a new climate change accord signed between the United States and China in November, and a global climate conclave scheduled for December in Paris are big steps toward stemming global warming.

“This is a turning point, and this satellite will contribute to this general change in direction for us as we face this challenge,” Gore said. 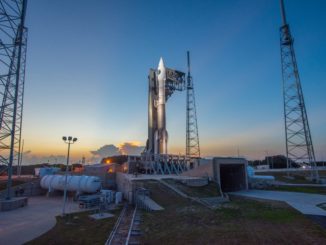 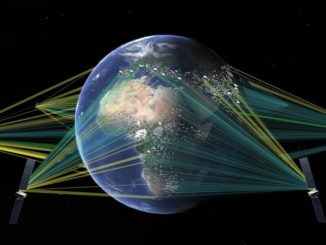 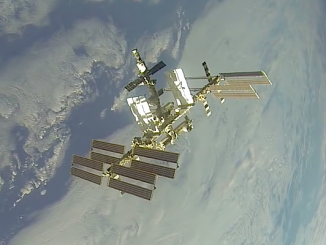