The Obama administration’s fiscal 2016 budget includes $18.5 billion for NASA — a half-billion-dollar increase — that continues development of a new mega-rocket and capsule for deep space exploration and significantly boosts funding for commercial spacecraft to ferry crews to and from the space station, agency officials said Monday.

The budget proposal also includes funding to continue studies of a proposed crewed mission to visit an asteroid in the 2020s, to pay for ongoing and planned robotic Mars missions and to keep the $6 billion James Webb Space Telescope, the long-awaited successor to the Hubble Space Telescope, on track for launch in late 2018.

“President Obama today is proposing an FY 2016 budget of $18.5 billion for NASA, building on the significant investments the administration has made in America’s space program over the past six years,” NASA Administrator Charles Bolden told Kennedy Space Center workers.

Standing in front of an Orion deep space exploration capsule that completed an initial test flight in December, Bolden said the budget represented a “half billion-dollar increase over last year’s enacted budget, and it is a clear vote of confidence to you, the employees of NASA, and the ambitious exploration program you are executing.”

Repeating what has become a sort of mantra for senior NASA officials, Bolden said the agency “is firmly on a journey to Mars. Make no mistake, this journey will help guide and define our generation.”

While eventual Mars flights are not expected until the mid 2030s at the earliest, NASA’s long-range focus is the red planet, a goal Bolden promotes at every opportunity.

NASA’s human exploration program accounts for nearly half of the agency’s 2016 budget request, or $8.51 billion. That total includes $3.106 billion for International Space Station operations, $1.244 billion for commercial crew spacecraft, $2.863 billion for the Orion deep space capsule and the heavy-lift Space Launch System booster and $400 million for research and development.

The commercial crew program budget includes contracts awarded last year to Boeing and SpaceX to develop independent spacecraft to carry astronauts to and from the space station starting in late 2017, a major element of the Obama administration’s space policy. Since the shuttle’s retirement in 2011, NASA has been forced to rely on Russian Soyuz spacecraft for transportation to the station, paying more than $70 million per seat under the most recent contract with the Russian federal space agency.

But Congress has never fully funded the commercial crew program, approving about $2 billion less than NASA requested between 2011 and the most recent budget cycle. As a result, operational flights have been delayed until the end of 2017 at the earliest.

The 2016 commercial crew funding request represents a $400 million boost over the $805 million budgeted in fiscal 2015. The funding covers milestones laid out by both companies to reach certification and operational space station flights by the end of 2017.

“If those two companies meet those milestones, we require $1.244 billion in FY 2016,” NASA Chief Financial Officer David Radzanowski told reporters in an afternoon teleconference. “Based on this funding level, and those companies meeting those milestones, it would support certification of commercial crew services by the end of 2017, meeting all of the NASA safety requirements.”

But he said if Congress provides less than the requested amount, additional delays will result and flights will not be possible in 2017 as currently planned. And until the new spacecraft become available, NASA will continue relying on the Russians for transportation to low-Earth orbit.

Bolden called the commercial crew initiative “absolutely critical to our journey to Mars, absolutely critical. SpaceX and Boeing have set up operations here on the Space Coast, bringing jobs, energy and excitement about the future with them.”

The centerpiece of the Obama administration’s near-term plans for deep space exploration is a proposed asteroid redirect mission, or ARM, that would robotically retrieve a small asteroid, or samples from one, and return it to the vicinity of the moon for hands-on analysis by astronauts using the Orion-SLS system.

The mission is viewed as a precursor for eventual missions to orbit Mars or its moons and, at some point, to land humans on the planet’s surface. ARM has been sharply criticized by many Republicans and some in the science community who argue a return to the moon would provide more science and technology bang for the bucks.

But Bolden insisted the ARM mission is an affordable path to development of the technology and expertise needed for flights to more distant destinations.

“Landing on an asteroid traveling through space or retrieving a piece of it requires advanced autonomous robotics and guidance and control technologies,” he said. “These NASA-developed technologies will be applicable to commercial satellite servicing, future exploration, resource extraction, mining, in situ resource utilization and planetary sample return.

“The asteroid mission will also demonstrate advanced high-power solar electric propulsion, critical for future NASA and commercial uses. The mission will test asteroid deflection techniques and may provide information to inform future work to help us protect our own home planet. We have identified several asteroids that could be good candidates and will make a decision soon on a capture option.”

NASA’s fiscal 2016 budget request includes $5.288 billion for science, including $1.947 billion for Earth science, $1.361 billion for planetary science — including funding to continue planning for a possible mission to Jupiter’s moon Europa in the mid 2020s — nearly $710 million for astrophysics and $620 million for the James Webb Space Telescope.

“As I stand before you today, in front of these very tangible examples of our progress and our future, I can unequivocally say that the State of NASA is strong,” Bolden said. “Our newest rocket, the Space Launch System, has moved from formulation to development, something no other exploration class vehicle has achieved since the agency built the space shuttle.

“We have two commercial providers bringing cargo and research to the space station, something that would have been science fiction just a few years ago is now fact. This success and the rapid progress our commercial crew providers are validating our faith and investment in commercial space.”

Looking beyond Earth and low-Earth orbit, Mars remains the top planetary priority for NASA. The agency currently is operating three orbiters and two operational rovers on the surface. Another lander is scheduled for launch in 2016 and a follow-on to the nuclear-powered Curiosity rover is planned for 2020. Both missions are funded in the 2016 budget request.

But one of NASA’s current rovers, the long-lived Opportunity, and the Lunar Reconnaissance Orbiter would not receive any funding under the 2016 budget request. Radzanowski said one or both could be reinstated depending on an assessment of their science value and the prospects for some sort of alternative funding. Both missions were “zeroed out” in the 2015 budget and both managed to remain operational.

Bolden focused on the future, saying robotic missions are paving the way for eventual manned flights.

“Our latest Mars spacecraft, MAVEN, arrived last September to study the upper atmosphere and joined a fleet of orbiters and rovers on the surface,” he said. “Next year, we will send the InSight lander to study the planet’s core. In 2020, a new rover building on the incredible success of Curiosity will help us prepare for human arrival at Mars and, for the first time ever, will cache a (rock and soil) sample for later return to Earth.”

Bolden noted the upcoming 25th anniversary of the Hubble Space Telescope’s launch in April 1990, and looked ahead to launch of the James Webb Space Telescope in 2018. He said those missions, a renewed push to study Earth and its environment from space and steady funding for NASA’s ongoing robotic exploration of the solar system reflect broad political support.

Summing up, Bolden said “the state of NASA is strong.”

“Because of the dedication and determination of each and every one of you in our NASA family, America’s space program is not just alive, it is thriving,” Bolden said. “Together with our commercial and international partners, academia and entrepreneurs, we’re launching the future. With the continued support of the administration, the Congress and the American people, we’ll all get there together.” 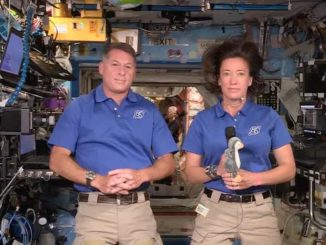 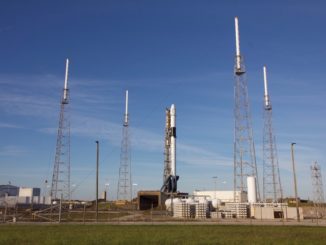 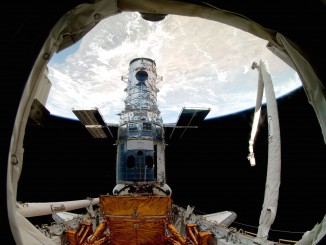