This is the ascent timeline to be followed by the United Launch Alliance Atlas 5 rocket in launching the Mobile User Objective System satellite No. 3 on Jan. 20 at 7:43 p.m. EST. With the RD-180 main engine running, the five strap-on solid rocket boosters are lit as the Atlas 5 vehicle lifts off and begins a vertical rise away from Complex 41 at Cape Canaveral Air Force Station, Florida. Having burned out of propellant approximately 20 seconds earlier, the spent solid rocket boosters are jettisoned to fall into the Atlantic Ocean. The separation event is staggered with two motors releasing first, then the others about 1.5 seconds later. The payload fairing that protected the MUOS 3 spacecraft during launch is separated once heating levels drop to predetermined limits after passage through the atmosphere. The Forward Load Reactor deck that supported the payload fairing’s structure to Centaur upper stage is released five seconds after the shroud’s jettison. The Centaur RL10 engine ignites for the first of three upper stage firings. This burn will inject the Centaur stage and MUOS spacecraft into an initial parking orbit. The Centaur engine shuts down after arriving in a planned low-Earth parking orbit of 90 by 340 nautical miles at 28 degrees inclination. The vehicle enters an 8-minute coast period before arriving at the required location in space for the second burn. At the conclusion of its second firing, the Centaur will have ascending into a 105 by 18,600 nautical mile orbit inclined 26 degrees to begin a two-and-a-half-hour coast. A final push by Centaur is ignited to raise the orbit’s low point and reduce orbital inclination for the MUOS spacecraft. The powered phase of flight is concluded as the Centaur reaches the planned geosynchronous transfer orbit of 2,053 by 19,323 nautical miles and 19.1 degrees inclination. The U.S. Navy’s third Mobile User Objective System spacecraft, MUOS 3, is released into orbit from the Centaur upper stage to complete the launch. 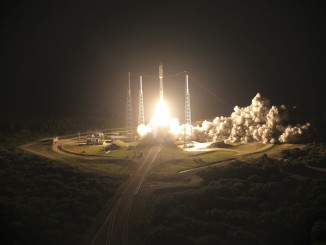 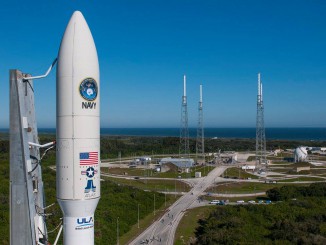 Photos: Atlas in the roll 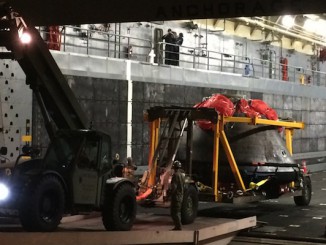