A Northrop Grumman Cygnus cargo freighter departed the International Space Station Wednesday after delivering more than 7,800 pounds of equipment and experiments, heading for an extended mission with payloads to study fire behavior in microgravity and test a next-generation radio system.

The expendable cargo ship was released from the space station’s Canadian-built robotic arm at 10:11 a.m. EST (1511 GMT) Wednesday, concluding a three-month stay at the orbiting research complex. Ground controllers commanded the robot arm to release the Cygnus spacecraft, while astronaut Kate Rubins aboard the station monitored the freighter’s departure as the vehicles sailed more than 200 miles over the Pacific Ocean.

Thrusters fired to send the Cygnus spacecraft on a safe trajectory away from the space station, setting the stage for a 20-day extended mission.

“I can confirm that was a beautiful departure,” Rubins radioed from the space station. “I just want to say, from the International Space Station, it’s been a pleasure having this Cygnus vehicle on-board. Congratulations to all of the NASA and the Northrop Grumman teams.”

The Cygnus mission is completing Northrop Grumman’s 14th resupply mission to the space station since 2013. The NG-14 mission began Oct. 2 with a launch aboard an Antares booster from Wallops Island, Virginia. The Cygnus spaceship arrived at the station Oct. 5.

Northrop Grumman named the Cygnus supply ship the “S.S. Kalpana Chawla” in honor of the first woman of Indian descent to fly into space. Chawla flew on two space shuttle missions, and she died with her six crewmates on the space shuttle Columbia in 2003.

The station’s robot arm berthed the S.S. Kalpana Chawla to the lab’s Unity module, and astronauts began unpacking the tons of gear inside.

The NG-14 mission delivered early four tons of supplies and experiments to the research lab, including a $23 million titanium toilet that is more female-friendly than the station’s other commode. The mission also carried a high-definition virtual reality camera planned for use on a future spacewalk, fresh food, biomedical experiments, and a plant investigation to test how radishes grow in space.

The Cygnus spacecraft’s pressurized compartment contains NASA’s fifth Saffire fire safety experiment. The payload inside Cygnus builds on Saffire experiments flown on past Cygnus missions, and will monitor how fires grow in a range of pressures and oxygen concentrations expected in future exploration spacecraft, according to NASA.

“We are looking forward to following her autonomous flight and the Saffire experiment, and thank you for bringing us an incredible amount of science and supplies to the space station,” Rubins said Wednesday after the Cygnus spacecraft departed the station.

The Saffire experiment, developed at NASA’s Glenn Research Center, is housed in a self-contained module inside the Cygnus spacecraft. It will also demonstrate fire detection, combustion product monitoring, and post-fire cleanup, NASA says.

“Data obtained from Saffire-V is to be used in the validation modeling of spacecraft fire response scenarios,” NASA says on its website. “Saffire-V increases our confidence in fire safety equipment and strategies for future spacecraft.”

A Northrop Grumman technology experiment named SharkSat is also mounted to the S.S. Kalpana Chawla. According to a NASA fact sheet, SharkSat will remain attached to the Cygnus spacecraft to demonstrate a Ka-band software defined radio system, which have applications in 5G telecommunications, satellite communications, radar, and autonomous and cognitive systems, according to NASA.

The Cygnus spacecraft is scheduled to fire thrusters for a braking maneuver to drop out of orbit and re-enter the atmosphere Jan. 26. The cargo ship, also loaded with several tons of trash from the space station, is designed to burn up during re-entry over a sparsely-trafficked section of the Pacific Ocean.

NASA contracted with SpaceX and Orbital Sciences, now part of Northrop Grumman, in 2008 to fly resupply missions to the space station after the retirement of the space shuttle. Northrop Grumman has flown 14 of those missions, and has another five Cygnus cargo deliveries on contract through 2023. 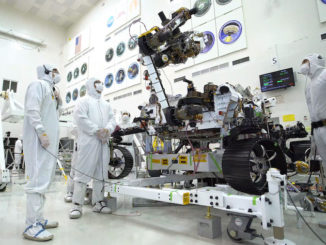 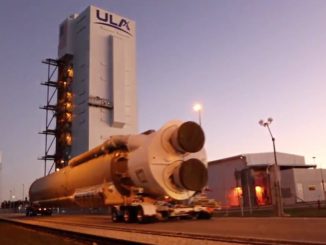 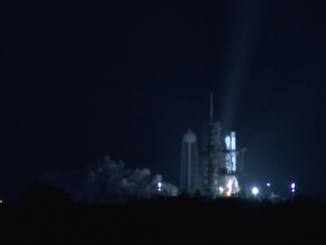