Blue Origin launched its New Shepard suborbital rocket to the edge of space Tuesday from the company’s remote desert test site in West Texas on an experimental flight to test precision lunar landing technology for NASA.

Blue Origin planned to launch the mission Sept. 24, but officials scrubbed the launch attempt to investigate a problem with the power supply to the experiments on-board the rocket. The company, founded by Amazon billionaire Jeff Bezos, announced Monday that it was gearing up for another try Tuesday.

The New Shepard rocket launched with a pressurized capsule on top, and its BE-3 engine fired nearly two-and-a-half minutes. Moments later, the pressurized section separated from the booster and coasted to a maximum altitude, or apogee, of 346,964 feet, or 105 kilometers, above ground level. Both vehicles then began descending back into the atmosphere.

The New Shepard booster deployed air brakes, reignited its BE-3 engine, and extended four landing legs to target a vertical propulsive touchdown on a landing pad near the New Shepard launch site in West Texas. The capsule unfurled parachutes and land on the desert floor with the aid of retrorockets, ending the mission around 10 minutes after liftoff.

Blue Origin is testing the New Shepard rocket and crew capsule for eventual flights to loft passengers on suborbital flights to space and back. Up to six people will ride inside the pressurized crew compartment on top of the New Shepard rocket. The reusable capsule and booster will separate after the launch sequence roughly two-and-a-half minutes after liftoff, coast to apogee and experience three-to-four minutes of weightlessness, then begin their separate descent profiles back to Earth.

Earlier this year, Blue Origin officials said they were conducting a thorough review of rocket and capsule systems to ensure everything was ready for flights with people. Joel Eby, who co-hosted Blue Origin’s webcast of Tuesday’s flight, said the company plans “just a couple more flights” before launching humans on suborbital jaunts.

Paying space tourists and commercial and government researchers could be passengers on future New Shepard flights.

The mission that launched Tuesday — designated New Shepard-13, or NS-13 — flew 12 payloads to space, including a sensor suite for NASA to demonstrate precision landing technologies that could guide future robotic and crewed missions to landings on the moon.

Blue Origin said NASA’s Deorbit, Descent, and Landing Sensor Demonstration that flew on on the NS-13 mission is part of a “Tipping Point” partnership between Blue Origin and NASA’s Space Technology Mission Directorate.

The landing sensors flew on the outside of the New Shepard booster, “opening the door to a wide range of future high-altitude sensing, sampling, and exposure payloads,” Blue Origin said. Previous New Shepard payloads have flown inside the pressurized capsule.

The experiment was designed to test key components of NASA’s Safe and Precise Landing – Integrated Capabilities Evolution, or SPLICE, technology suite. NASA says the SPLICE sensors “will enable safer and more accurate lunar landings than ever before.” The system’s algorithms and sensors could allow lunar landers to touch down in rugged regions with boulders and craters, places that were unreachable during the Apollo program.

The sensors will identify hazards such as steep slopes and boulders, allowing lunar landers to steer to the safest touchdown zone with a circular area around 330 feet, or 100 meters, in diameter. It’s part of NASA’s technology development initiatives for the agency’s Artemis program, which aims to return humans to the lunar surface by the end of 2024.

And Blue Origin’s crew capsule has completed a 10-minute flight to space and back with a parachute-assisted landing.

The NS-13 test flight tested two of the three SPLICE sensors — a navigation doppler lidar and a terrain relative navigation camera — mounted on the upper portion of the New Shepard booster. A descent and landing computer housed inside the rocket was expected to receive and process the sensor data.

“Testing SPLICE technologies on a suborbital rocket expands the envelope beyond previous lab tests, helicopter field tests, and lower-altitude suborbital rocket tests,” said John Carson, technical integration manager for precision landing based at NASA’s Johnson Space Center in Houston. “We will get more data about the system to anchor analyses and models and support follow-on adjustments, testing, and development.”

A third sensor called a hazard detection lidar will fly on future SPLICE test missions. NASA says it designed the system’s sensors to work independently, with one or all SPLICE sensors capable of supporting a single mission. The SPLICE suite will fly to the moon on a pair of commercial robotic landers from Astrobotic and Intuitive Machines as soon as next year.

Blue Origin is leading a team of companies developing a human-rated lunar lander for the Artemis program, alongside aerospace contractors Lockheed Martin, Northrop Grumman, and Draper. Industrial teams led by Dynetics and SpaceX are also vying for a NASA contract to build the human-rated moon lander.

The company is also developing a huge orbital-class rocket named New Glenn, which will launch large satellites from Cape Canaveral.

They included microgravity experiments to test a hydroponic chamber for growing edible aquatic plants in space, demonstrate a magnetic system for collecting small rocks from asteroids, and a payload to test a device for transferring and delivering cryogenic propellants in space.

Blue Origin also flew tens of thousands of postcards from students around the world for the company’s nonprofit group Club for the Future. 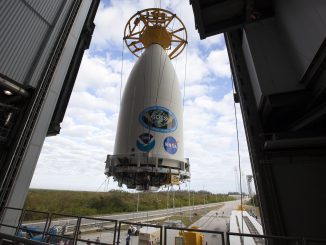 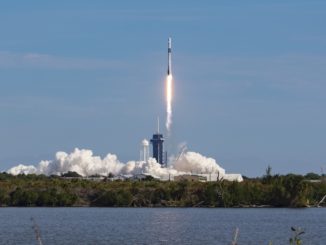 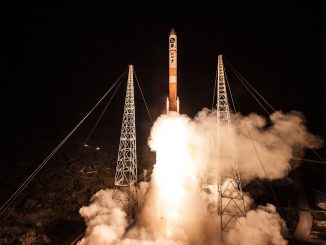