The two-stage LauncherOne vehicle was filled with super-cold liquid nitrogen — in place of the liquid oxygen used on a real launch — and kerosene fuel for the nearly two-hour test flight. The 70-foot-long (21-meter) rocket was mounted on a pylon under the left wing of a Boeing 747 carrier jet, which Virgin Orbit has named “Cosmic Girl.”

The company’s LauncherOne rocket is designed to carry small satellites into orbit. The LauncherOne will be released from its jumbo jet mothership at around 35,000 feet (nearly 10,700 meters), then fire into space to deliver up to 660 pounds (300 kilograms) of payload to a 310-mile-high (500-kilometer) polar sun-synchronous orbit.

Sunday’s captive carry test was the first time a LauncherOne vehicle was filled with super-cold cryogenic fluid and flown under the wing of Virgin Orbit’s modified 747 jet. Last year, Virgin Orbit completed a series of flights of the carrier jet with a test version of the LauncherOne rocket, culminating in a drop of the inert rocket over Edwards Air Force Base, California.

The rocket was filled with water to simulate the weight of a fully-fueled LauncherOne vehicle, and the test unit impacted the ground at Edwards after the 747 pilots command its release.

For Sunday’s test flight, Virgin Orbit loaded the rocket with super-cold fluid and flew it under the 747 under cryogenic conditions for the first time. Sunday’s flight also used same rocket that Virgin Orbit plans to launch into space on its first orbital demonstration flight.

The 747 jumbo jet took off from Mojave Air and Space Port Sunday and flew toward the west, then south over the Pacific Ocean to the drop point for the upcoming demonstration launch. The carrier jet entered a racetrack pattern over the Pacific, then the 747 flight crew put the airplane into a 25-degree climb just southwest of San Nicolas Island, which is owned by the U.S. Navy.

On a real launch, the nearly 30-ton rocket would be released the pylon under the 747’s left wing during the pull-up maneuver.

But the rocket remained firmly attached to the pylon on Sunday’s flight, and the aircraft returned to Mojave for inspections and data reviews before Virgin Orbit presses ahead with the test launch.

Earlier this year, Virgin Orbit put the LauncherOne rocket through a series of rehearsals and simulations on a test stand at Mojave, then mated the launcher with the 747 carrier jet for further checkouts and testing.

“Like everyone else, COVID-19 is changing our lives and dominating our thoughts,” Virgin Orbit officials wrote in an update posted on the company’s website last week. “Even as an essential business requested to remain open, we’ve made major changes to our plans, our work spaces, our procedures, and our schedules in order to keep our teammates safe and to help flatten the curve.”

In response to the pandemic, Virgin Orbit engineers have designed a simplified ventilator that could be used to help patients with moderate cases of the virus.

But preparations for Virgin Orbit’s inaugural test launch continued. The company says it gave employees a week off last month to prepare for the pandemic, and teams rewrote procedures to ensure personnel can maintain physical distancing guidelines at Virgin Orbit’s factory in Long Beach and at the test site at Mojave.

“With a robust plan for safe operations in place, we began bringing essential teammates back on site — but continue to have as much as 90 percent of our staff working remotely,” Virgin Orbit said.

Engineers will examine data from the captive carry flight and run through a few final rehearsals, according to Virgin Orbit. The company said the rehearsals will give “the team a few additional chances to practice their jobs with our new COVID-19 procedures in place.”

“Our team is laser-focused and working methodically,” Virgin Orbit said. “We’re doing so with the full knowledge of the statistics behind maiden voyages of rockets.”

Virgin Orbit did not announce a schedule for the LauncherOne’s first orbital test flight.

“All of us in aerospace know that about half of all rockets fail on their first launch attempt,” the company said in last week’s online update. “Each team of intrepid rocketeers knows that in spite of all of our hard work we can never rule out that possibility. But we are also armed with the confidence that this pursuit is worth the struggle to overcome its inherent challenges, and comforted by the knowledge that we’ll learn so much about how our system operates.

“We’ll build on the good and figure out where improvements are needed and why,” the company said. “We are doing our level best to make the day a big success — and preparing for absolutely every scenario.”

Virgin Orbit is selling LauncherOne missions for around $12 million, and has already cinched contracts with NASA, the U.S. military, and several commercial customers.

The NewtonThree engine on LauncherOne’s first stage will generate 73,500 pounds of thrust in vacuum, firing for around three minutes on each mission. The second stage’s NewtonFour engine will ramp up to 5,000 pounds of thrust, and can be reignited in space to maneuver into different orbits.

Cryogenic fluids boil off if they get too warm. Rockets launched from the ground typically have their cryogenic propellant supplies continuously replenished until just before liftoff to ensure the tanks are full, but LauncherOne will be disconnected from its propellant supply before takeoff.

LauncherOne’s liquid oxygen tanks are coated with spray-on foam insulation to keep the cryogenic fluid insulated during the climb to the rocket’s release altitude. 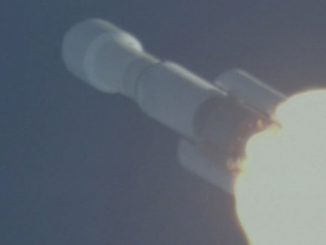 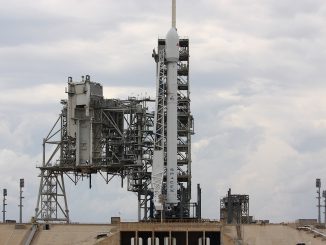