The third launch of China’s heavy-lift Long March 5 rocket successfully delivered its satellite payload to orbit Friday, validating engine design changes after a failure on the Long March 5’s second flight, and clearing the way for the launch of a Chinese Mars rover and lunar sample return mission in 2020.

A live video stream on Chinese state television showed the Long March 5 rocket firing into cloudy skies over the coastal launch base in China’s southernmost province.

The launch Friday marked the first flight of a Long March 5 rocket since the launcher’s second mission in July 2017 ended in failure, prompting a two-and-a-half-year grounding and redesign effort.

China’s first Mars rover is scheduled for launch on a Long March 5 in mid-2020, and the Chinese Chang’e 5 lunar sample return mission will also require the Long March 5’s lift capability to depart Earth and head for the moon.

Friday’s mission was critical for the Mars and moon missions to launch on their current schedules.

The launch of Chang’e 5 has already been delayed due to the grounding of the Long March 5 after the 2017 failure. China’s Mars mission must launch during a several-week-long period in mid-2020, or else wait until 2022, when Earth and Mars are in the proper positions again to make a direct interplanetary journey possible.

A future variant of the Long March 5 rocket will also launch modules of China’s planned human-rated space station, scheduled to be completed in 2022, adding another layer of importance to Friday’s test launch. The Long March 5B configuration, which is tailored for space station module launches, could debut some time in the second half of 2020 carrying a prototype of China’s next-generation human-rated spaceship on an unpiloted demonstration flight.

The Long March 5 is the heaviest rocket in China’s fleet, and one of the most powerful launcher’s in the world. The Long March 5 can deliver up to 14 metric tons — nearly 31,000 pounds — to geostationary transfer orbit, a popular target orbit for large communications satellites.

The launcher’s lift capability to low Earth orbit is around 55,000 pounds, or 25 metric tons.

Chinese teams loaded the Long March 5 rocket at the Wenchang space base with liquid hydrogen, kerosene and liquid oxygen propellants ahead of the launcher’s blastoff Friday.

Gantry arms on the Long March 5’s 300-foot-tall (92-meter) launch pad tower opened in the final phase of the countdown, and a member of the Chinese launch team crisply called out the final seconds before liftoff.

After ascending through clouds, the Long March 5 arced toward the east from the Wenchang launch base. Cameras mounted on-board the rocket showed the four liquid-fueled boosters shutting down their engines and jettisoning to fall into the South China Sea some three minutes into the mission.

The two YF-77 engines on the Long March 5’s core stage burned their supply super-cold liquid hydrogen and liquid oxygen propellants for nearly eight minutes. During the first stage burn, the Long March 5 released its clamshell-like payload fairing once the launcher climbed above the thick, lower layers of the atmosphere.

The second stage engines performed two firings before deploying the Shijian 20 communications satellite into an elliptical, or egg-shaped, transfer orbit stretching more than 42,000 miles (about 68,000 kilometers) from Earth at its most distant point.

A forward-facing camera on the Long March 5’s second stage showed the Shijian 20 spacecraft separating from the rocket, prompting applause in the launch control center.

The Shijian 20 spacecraft will use its own propulsion system to circularize its orbit at geostationary altitude more than 22,000 miles (nearly 36,000 kilometers) over the equator.

But a first stage engine failure on that mission prevented the rocket from reaching orbit, destroying the Shijian 18 communications satellite. China declared the first Long March 5 launch in November 2016 a success, despite a rocket problem that forced the Long March 5’s Yuanzheng upper stage to burn longer to place the Shijian 17 technology demonstration satellite into its planned orbit.

Investigators traced the cause of the July 2017 launch failure to a turbopump on one of the Long March 5’s two YF-77 first stage engines.

The changes led to a gap of more than two years between the second and third Long March 5 flights. In the interim between launches, engineers conducted test-firings of the modified YF-77 engine to verify the design changes, according to the State Administration for Science, Technology and Industry for National Defense, or SASTIND, the Chinese government agency that oversees the country’s space activities.

The YF-77 engines were developed specifically for the Long March 5.

In addition to introducing changes to resolve the YF-77 engine problem, Chinese engineers simplified some structures on the Long March 5 rocket to make it lighter, increasing the launcher’s carrying capacity, according to the China Academy of Launch Vehicle Technology, the country’s lead state-owned contractor for the Long March rocket family.

The Shijian 20 satellite launched Friday will replace the Shijian 18 satellite lost on the Long March 5 failure in 2017.

Based on the new DFH-5 satellite design developed by the China Academy of Space Technology — a state-owned satellite manufacture — the Shijian 20 spacecraft will test new technologies to support higher-throughput data links with users on the ground. 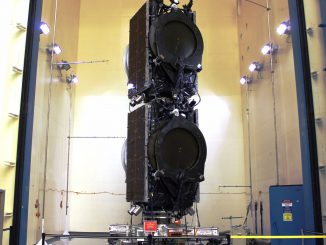 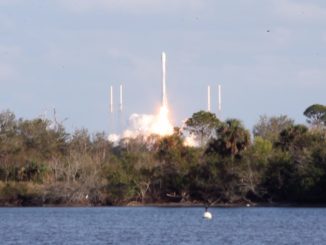 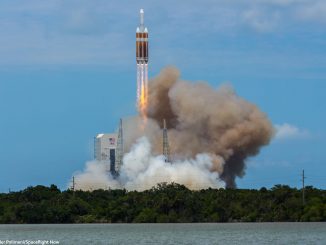