SpaceX plans as many as 24 launches next year to build out the company’s Starlink network to provide broadband Internet service from space, following up to four more Starlink missions before the end of this year, according to SpaceX’s chief operating officer.

The rapid-fire launch cadence for SpaceX’s Starlink fleet will take up the majority of the company’s launch manifest next year with a series of missions taking off from Florida’s Space Coast, adding new nodes to a network that could eventually contain nearly 12,000 small satellites.

SpaceX launched the first 60 satellites for the Starlink network in May, and the next batch of Starlink spacecraft is expected to take off in October from Cape Canaveral aboard SpaceX’s next Falcon 9 rocket flight.

What comes after the October Starlink mission in SpaceX’s launch manifest is not yet confirmed.

Gwynne Shotwell, SpaceX’s president and chief operating officer, said Sept. 10 that SpaceX could conduct up to four more Starlink missions before the end of the year.

The initial set of Starlink satellites will fly in 341-mile-high (550-kilometer) orbits inclined 53 degrees to the equator. Last month, SpaceX requested approval from the Federal Communications Commission to fly up to 1,584 Starlink satellites in 72 different orbital pathways, a change from the the commission’s earlier authorization for SpaceX to operate the same number of spacecraft in 24 planes.

SpaceX says the realignment will allow the Starlink network to begin providing broadband services to the southern United States in the second half of next year, with fewer satellites and launches than previously planned.

“Specifically, based on the successful deployment of its first 60 satellites, SpaceX has confirmed that its groundbreaking deployment process, combined with the capabilities of its satellites and launch vehicle, will allow it to optimize its system with a slight realignment of its already-licensed satellites at their authorized altitudes,” the company said in an Aug. 30 filing with the FCC. “This adjustment will accelerate coverage to southern states and U.S territories, potentially expediting coverage to the southern continental United States by the end of the next hurricane season and reaching other U.S. territories by the following hurricane season.

SpaceX founder and CEO Elon Musk said May that the Starlink network could reach an initial operating capability with limited geographical coverage at around 400 satellites, and could offer “significant” coverage with 800 satellites.

SpaceX is currently in a relatively quiet period of launch activity.

The company’s most recent Falcon 9 launch occurred Aug. 6 with the Amos 17 commercial communications satellite for the Israeli operator Spacecom Ltd.  The next Falcon 9 launch is scheduled for mid-October, at the earliest, with the next set of Starlink broadband satellites.

Aside from the Starlink launches, SpaceX has several other missions in its backlog that could be ready for launch before the end of the year. All of the company’s remaining Falcon 9 missions this year will take off from SpaceX’s launch pads in Florida.

A Boeing-built communications satellite jointly owned by SKY Perfect JSAT Corp. of Japan and Kacific Broadband Satellites of Singapore could launch as soon as November from Cape Canaveral. Once placed in geostationary orbit, the JCSAT 18/Kacific 1 spacecraft will provide mobile and broadband services across the Asia-Pacific region.

SpaceX also plans to launch its next unpiloted Dragon cargo mission to the International Space Station on Dec. 4.

The company’s human-rated Crew Dragon spacecraft, developed under contract to NASA, may also be ready for an abort test launch before the end of the year. The abort demonstration will verify the capsule’s ability to escape a failing rocket in flight, and SpaceX will use a full-size Falcon 9 rocket for the atmospheric test.

The in-flight abort has been delayed for several months in the wake of an explosion during Crew Dragon testing on the ground in April. Engineers have traced the cause of the explosion to the capsule’s abort propulsion system, but found no fault in the abort engines themselves.

The in-flight abort is a prerequisite for the Crew Dragon’s first orbital mission with astronauts. SpaceX officials say they hope the first piloted Crew Dragon mission, designated Demo-2, could launch before the end of this year, but sources say the flight is more likely to occur in 2020.

An Airbus-built South Korean military communications satellite named Anasis 2 could also launch on a Falcon 9 rocket before the end of the year, but South Korean officials have not released an update on its status since May.

In her remarks last week, Shotwell said SpaceX aims for 24 Starlink missions in 2020. That figure will be in addition to SpaceX’s launches for other customers, including NASA, the U.S. military and commercial satellite operators.

Rideshare launch opportunities for satellites weighing up to 440 pounds (200 kilograms) will come with a base price of $1 million, according to SpaceX.

SpaceX’s backlog of customer missions could push the company’s total Falcon 9 and Falcon Heavy manifest to near 40 launches in 2020, according to an analysis of announced launch contracts and schedules.

SpaceX has launched 10 orbital missions so far this year, following a record 21 launches in 2018. 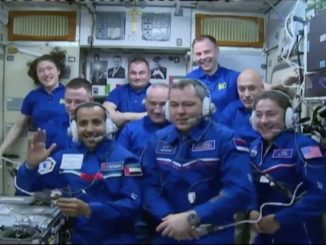 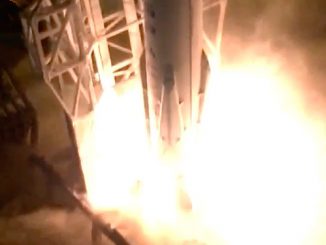 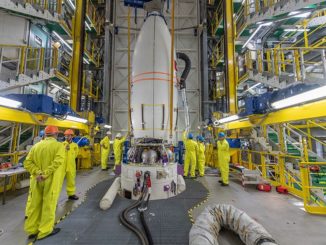